I was sick in December, really sick, with a cold that went around the office before it stopped by me. By that time, it had mutated beyond recognizable proportions and I spent Christmas in my pajamas nursing mugs of hot tea and practically snorting Vick's Vapor Rub. You know how it goes. You're tired, so you take a nap and sleep 5 hours. Then, when 10:30 pm rolls around, the last thing you want to do is sleep, but you're tired of surfing the web or playing World of Warcraft. What to do.

Reading was a disaster. I started a new book but the head cold made everything so fuzzy. I had this raking cough which, when it started, took a good 5 minutes to stop. (Quick! Where is the cough syrup AND cough drops?) I tried cross-stitching on my current project, but I couldn't count right and will have to rip out the stuff I did because it's wrong. I paced. I swept floors. I was having a sewer drainage issue which wasn't going to get resolved until the day after Christmas so thoroughly cleaning wasn't possible. (I'm still behind on laundry.)

Then, I spotted the filing. I was way behind in that. It was the end of the year and I would be needing to file income tax forms. Somewhere in the pile are the receipts for donations. I need to find and organize all of that. I like to file early and get it over with, but to do that, I was going to have to dive into the pile.

I did so with a vengeance. I went through all the folders. Anything 10+ years old or things I don't need to keep which had an account number on them were shredded. The shredder jammed several times and got really warm once. I've had the shredder for 15+ years. It's chewed up a lot of paper.

The kitten was given a few slices of paper to play with but he got bored with that. None of the kids liked the sound and ran when it jammed. Eventually, they figured out I was possessed with sorting and cleaning so they left me alone. I had piles on the bed, which Pilchard took to lying on so certain folders didn't get cleaned until she moved.

In the end, my recycling can was three-quarters full of shred. 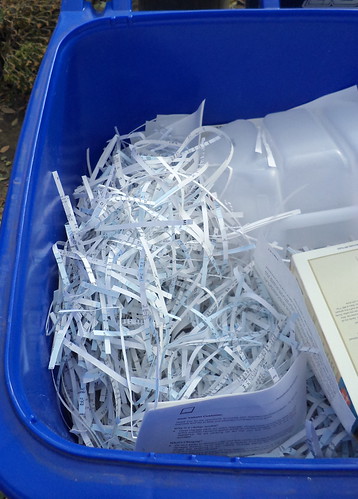 I filed everything which needed to be filed. There is nothing errant in a pile on the table in the bedroom awaiting the chance to be put in the right folder. It's completely clear of paper. I found ALL my bookmarks. I am so proud of myself.

This gave me a bit of pause. If someone opened the can when it was out at the curb and rifled through it, they would see all this shred. Would it arouse suspicion that, perhaps, someone was shredding their identity? Were they getting rid of a life to start something new?

No, nothing so intriguing, although it would make a good starting sequence for a novel. "She closed the lid on the recycling can. Her life, all of it, was in thin strips of paper, commingled with soup cans, water bottles and cut down boxes. Perhaps someone, with vast amounts of time on their hand, could reassemble the bills and the statements, but she hoped the recycling company would get to this before anyone else."

It felt so very good to do this. It was one of those onerous jobs, way down on the list, I needed to do, to gain more control of my life, to make spaces in the house more enjoyable. After a couple hours, it was actually fun. Electric bills from 2009. SHRED!

When I paid bills at the beginning of this month and gathered up the receipts, I walked into the bedroom and didn't feel the compulsion to just shove them in the pile of paperwork awaiting filing. I felt the need to file them where they belong. It takes but 5 minutes after bill paying. That the spot is clear and the paperwork caught up makes me want to keep it that way.