Last spring, we had a large inspection job in the Lincoln Park area of Chicago. I didn't do as many of those inspections as others did, but I took my turn. On one day, I went to my first appointment and there was this cat. He (I checked) was a friendly sort, wanting ear and chin scratches. 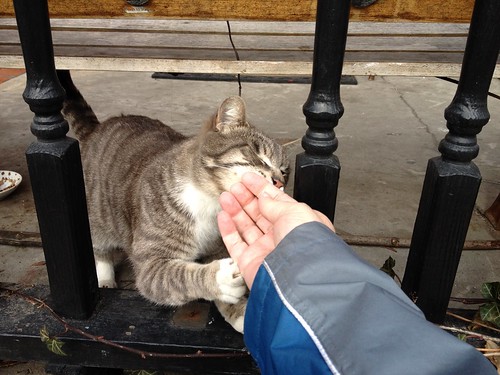 I noticed, as I was loving up this guy, there was, to the left, food and water left outside. Now, I don't approve of family cats going out without supervision or being allowed to roam. There was a hefty black, long-haired cat in my yard yesterday and I dashed to the bedroom to make sure Pilchard didn't accidentally get out. But this cat strolled down the drive, looked both ways before crossing the street and disappeared behind the house of the people kitty-corner from me. He did not look like a stray, but it pains me to see a cat wandering about at all. This guy above obviously loved people and people loved him. When I went to take his photo, he hammed that up, too. 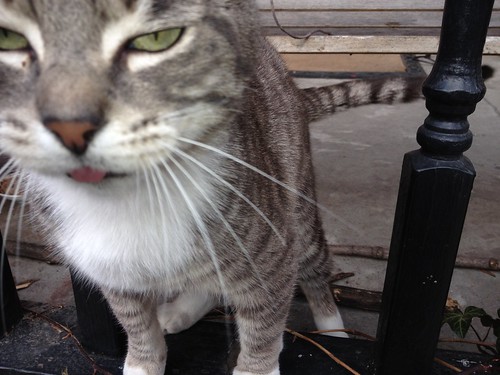 I had to continue on to the inspection which was 2 doors down from where he was. He looked at me as if to say, "Hey! You! You're not done petting me!" He followed after me and sat at the junction of the sidewalk and front walk looking at me as I walked up the steps. When the homeowner answered the door, she laughed and said, "I see you've met 'Charlie'. He's one of our neighborhood cats and is probably the friendliest."

Neighborhood Cats. I have heard about these. Where there is a rodent problem, a feral community is established to control it. The neighborhood agrees to feed and house the cats in exchange for killing mice and rats. They also get a reduced rate at a nearby vet for shots and spaying and other veterinary needs.

What was really ironic was two weeks before this inspection, I had listened to an NPR broadcast about these same cats. I thought, "That is really cool. It works for the cats. It works for the neighborhood." I drive into Chicago so much, I can lose track of exactly which neighborhood I am in. When this lady said Charlie was a neighborhood cat, all things clicked. I asked where the colony was. She didn't know. She had the most amazingly BIG dog so cats didn't come in her small back yard. She thought it was up the street a bit. "There's a wonderful woman who has sort of taken the colony as her own so they might live up there. I know she had those shelters in her back yard."

Charlie wasn't waiting for me when I came out the side of the back yard, but as I worked my way from back to front, he must have heard me because he came trotting over and sat on the sidewalk waiting for me to finish the alley side of the house. It seems he had learned the alley wasn't a good place for cats. When I finished, I had a 30 minute wait for my next appointment, which was a block away. He jumped up on the porch where I'd met him and looked at me. Well, I can't not scratch. After about 10 minutes, a guy came out of his house. This was a collection of four townhomes to which my inspection had been attached. Looking at the rear of the home, it appears the townhomes had, originally, been an apartment building which had been converted. He looked at me, looked at Charlie and burst out laughing. "I see you've met Charlie. He's a lover, he is. He snookers everyone in the neighborhood for scratches. Come on up here and sit down. He'll jump in your lap. Just don't pick him up. He doesn't like that." So, I went up on this guy's section of the porch, sat down in this small iron settee he had and sure enough, Charlie hopped up into my lap. I sat there for a good 15 minutes until I really had to go. Although the others in the office did inspections in the area, no one but me saw Charlie. I wonder how he's doing.

This is such a mutually beneficial program for cats. I know, in some areas, cats are taken to farms to help with rodent populations. The farm agrees to provide food, water and a warm area of the barn. The farmer gets reduced vet bills or the organization which placed the cats assumes vet bills for a time, to get the colony established. All cats are spayed and neutered so there are no kittens.

Yes, I was yelled at when I got home, but I'll take that when I see outdoor cats being loved and cared for.