How Was Your Summer, Part 4

So, I'm home, going on 6 months now, with a new-to-me car. Yes, it's 5 years old, but it was not driven very much and was well-maintained. These two things made the price more, but also contributed to the attractiveness of the vehicle.

I got asked, quite a bit, that first week, what was the difference between the Jeep and the Malibu.


I lost one of my bumper stickers.

This had been on the Jeep for a very, very long time. I removed it and it just crumbled. One of the problems of the Malibu is that the bumpers are heavy gauge plastic. I don't want to adhere stickers to the bumper and not be able to change my sentiments. My bumper stickers were on these magnetized strips which I would remove and replace, sticking the old ones on the side of the fridge. On the way to Virginia, the only sticker I had was an Iowa Hawkeyes sticker on a magnet, stuck to the trunk.

I had been given a minion decal a couple years ago but really didn't want to put it on the Jeep. It was perfect on the Malibu. 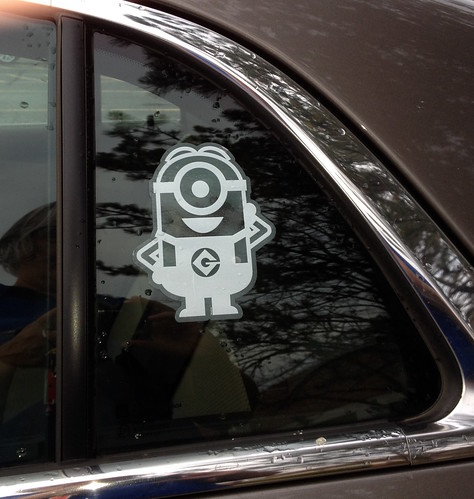 Then, probably when I stopped for a potty break in Indiana, someone peeled off the minion decal and swiped the Hawkeye bumper sticker. I didn't notice until the day after Thanksgiving when I was outside at Carole's helping with Christmas lights. 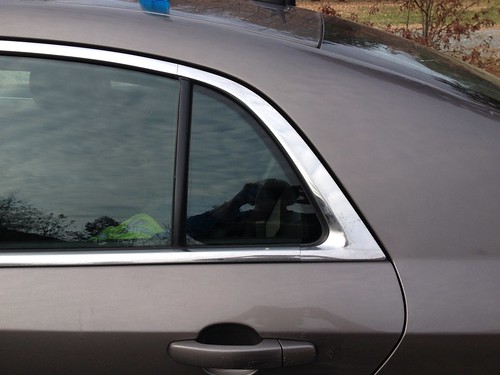 Seriously. Who does stuff like this? I was really angry. Nothing I can do about it, however. Ironically, I put the bumper sticker on the car at the beginning of football season. It had lasted through a number of trips into Chicago where you'd think sticky fingers would abound. It took a rest stop in Indiana to have it stolen. I replaced the minion decal with a decal supporting Ocearch a non-profit which does research into sharks off the east coast. 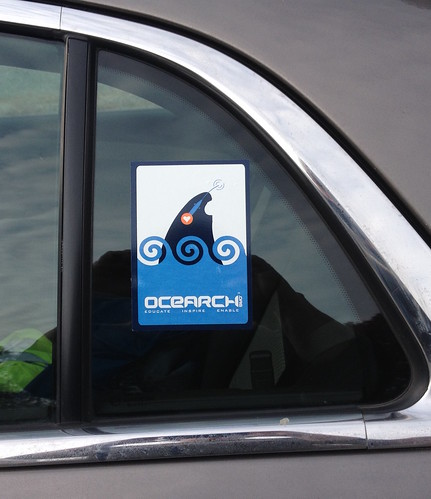 I also added, in the rear window, a Cubs decal. 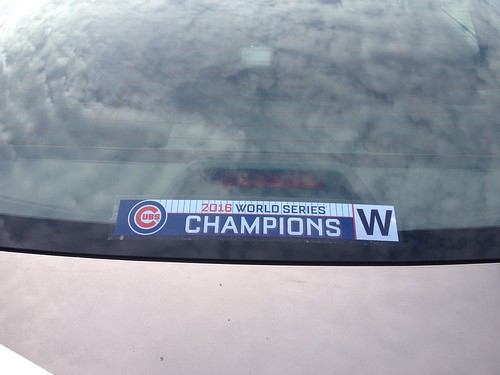 That will be its own post. Unfortunately, it popped off with the first snow so I have to figure out how to attach it to the window so it stays. The sticky side is on the back side of the decal. If I stick it to the inside of the window, the decal will be backwards. Right now, it's stuck to the side of the fridge where I won't lose it. 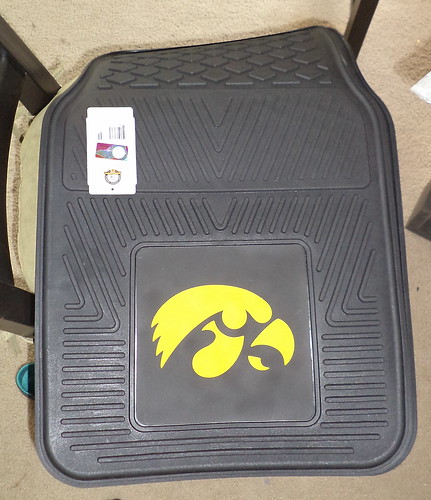 They are doing their job because the back yard, thanks to an abundance of rain, is a swamp and extremely muddy. I will need to hose these off once the air temperature gets and stays, above 60.

Larry also helped me put Jack Skellington back on the car. The Malibu does not have an antenna. What's there is compact and the antenna topper I bought in 2015, was not going to work. I hit upon the idea of attaching the topper to one of those 3M easy hang picture hangers. They had one with a metal hook, just the right size for the topper. But the adhesive on the hanger would not stick to the plastic of the dash where I wanted to put it. 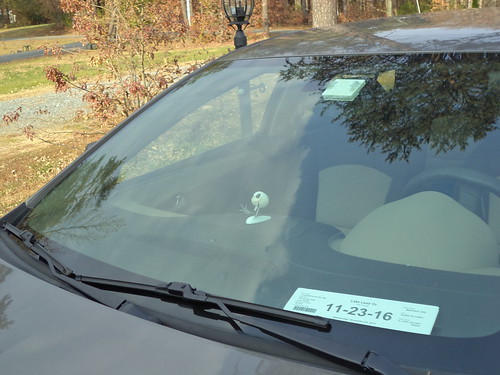 I tried Elmer's glue, but, when it got hot inside the car, the glue melted and popped off. Larry had a tube of brand new super glue. If I feel I'm going to be anywhere the topper could attract unwanted attention, I can pop it off the hanger and stick it in the center storage well.

It took until mid-September to get the license plates all squared away. It took a bit for the DMV to understand I wanted to transfer the title and get completely new plates, but with my personalization. It was expensive, another cost I had not factored in when I bought the car. 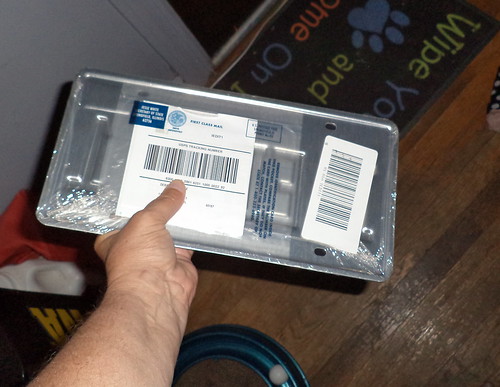 I was so excited when they finally came.

So, it's all mine. Everything has sorted itself out. I've gone to Virginia twice in it and the trips have been comfortable. I see Jeeps on the road and it's hard to remember what it was like to drive the Jeep, although I loved that car. It was time to move on.