During the summer, I tried to keep this bird feeder filled. But I got busy and couldn't find the seed I'd purchased and stored away where it wasn't in the way. My bad memory. I hid it too well, at least from myself. When I found it in early December, it was three-quarters gone; gone to mice which I was sure I'd eradicated and prohibited from getting into the house. One bag had been completely emptied and the other bag was half full. I dumped it on top of the stump where I put the squirrel blocks.

There was an after-Christmas sale at Ace Hardware so I bought another bag to attempt a refill. There was reasonably nice weather right after Christmas so I didn't need a lot of heavy clothing to refill the feeder. It took 3 days for the vermin to figure out it was filled. 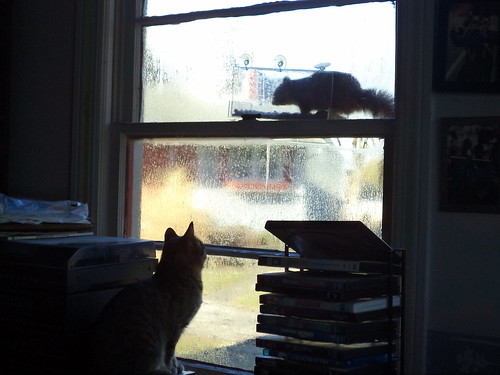 Now the reason the windows are foggy is because the guy who does my lawn is also studying to be an HVAC technician as well as lawn maintenance and landscaping. He offered to clean the furnace because it's something he's studying. He noticed the humidifier part; which was why I bought the furnace in the first place; wasn't working. No, it hasn't but the quote to fix it was hundreds of dollars and I was kind of okay without it. He had his instructor come look and diagnose the problem. Then, he bought the part and fixed the furnace for minimal mark-up. He's going to use me as a reference, which I'm happy to provide because this guy is great.

The humidifier part works great, but points out just how bad my ancient windows are. At the time of this photo, I hadn't covered this window with an insulator kit. Still, this provided the kitten with amusement.

The squirrels haven't completely cleaned out the seed, but I don't think they like all of it. The birds haven't discovered this and you can see one of the suction cups on the right side came loose. I will be filling this again. I fully expect to come home some time this winter and find the thing on the ground. I have another suction cup feeder which just doesn't survive squirrels landing on it. I need to get a step ladder so I can put it where I think they won't get to it; where it's visible to the cats; and where it's not a chore to fill.

Squirrel TV is the best.