In a previous post, a talked about the planter box I bought last March. I have a few photos taken over the summer to show how it worked with the peppers and sunflowers I planted in it. In this post, I'm going to discuss an accouterment to the box which I had hopes for.

It could be argued that I'm not going to be in this house that much longer so why am I making some changes. Well, I want the house to be useful to me as long as I live here. I'm tired of coming home and not being happy with how things look; vis-a-vis; the dead ash and the trash on the north side. I need to not spend my evenings and weekends in front of the computer. I need to be outside and enjoying the sun and breeze. That means I need to look at what gives me pleasure. The planting box certainly did. I like the idea of fresh off-the-plant peppers. And I want to be a part of keeping monarch butterflies alive.

Toward that end, I found, in one of the myriad of garden catalogues I get, these swaying metal stylized poppies. The premise of these is that the cupped flower will hold just enough water for butterflies to land and drink. They need a water source as well as a bird does. Having water in your garden, in addition to attractive plants, means more butterflies.

They came in four colors. I chose orange red because, eventually, I want to plant poppies on the opposite side of the downspout where the box sits. When the box came, I was more than a little nonplussed. These were not what I expected at all. It was interesting that they are made in India. You get a long box with flowers in a plastic bag. 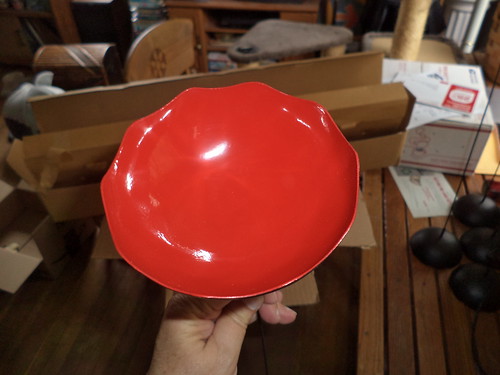 You can see the box in the background. These flowers are anodized and they just sit on the end of the long metal stake which is inserted in the ground. In an enclosed space, where there isn't much wind, this might be fine, but the product description clearly stated these were for garden use. All it would take would be a heavy rain and I'd be out picking up the flowers off the ground. No mention in any product description that this was a two piece item. 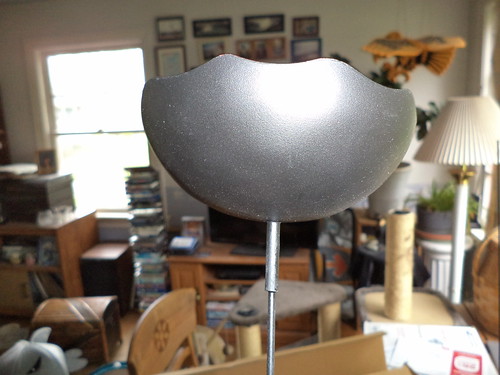 Well, although I was very disappointed, I realized I could "fix" these. I grabbed the bottle of super glue. I put a couple drops of glue in the stem where the stake is inserted, smeared more glue on the stake and inserted the stake into the stem. 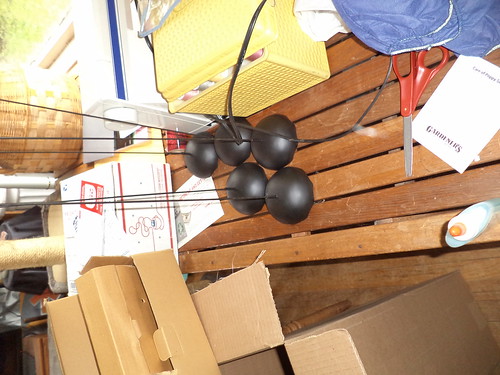 I left the flowers sit for 48 hours, to give the glue time to set and cure. Then I took them outside and inserted them in the planter box, which, you see has been planted with sunflowers at the yellow markers, and three peppers; yellow and two orange varieties. 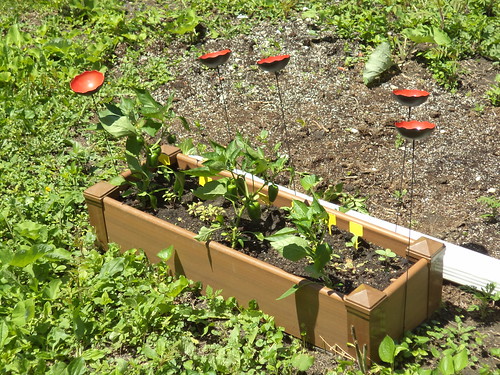 It looks cool. If you put them as a cluster, they bang together to make a "light metallic sound", the description said. Um...no. I wanted them as a decoration around the box edges and then as a receptacle for water for butterflies. I knew they wouldn't attract birds. The orange is supposedly a wavelength butterflies see.

Was it successful? Not really. I never saw a butterfly land on a flower. We had some very heavy rains throughout the summer and I am convinced if I had not glued the flower to the stake, I'd have lost some of them. They did fill nicely with rain or when I watered the peppers with the hose. But as a means of providing water to butterflies, I don't think this works. It's also possible that the sunflowers did for that what they did for the peppers, block out access. I won't be putting sunflowers in this box this year. It's strictly for peppers. We'll see if that changes use.

I wouldn't recommend these for garden use simply because the flower just rests on the stake. That isn't, for me, enough of a seal to prevent the flowers from falling off, particularly in midwest thunderstorms.