How Was Your Summer, Part 6

I might have had a lot on my mind at the end of June, beginning of July. But helping Becky find a forever home for the waif in the bathroom was never far away. I posted and reposted the photos. I sent inquiries to no-kill shelters in the east and southeast Virginia area. All were full of kittens. They empathized, but no one was willing to take a kitten. Then a co-worker of Becky's came forward.

She would provide the kitten with a home. Her son had seen the photos and was in love. They would come get the girl the week before I was slated to come to Virginia on vacation. I was thrilled. Then it all fell apart.

I'm not privy to why it fell apart; it just did. We were back to square one. Becky was devastated. "I don't know what to do. It can't live in my bathroom. At some point, Zia (one of her dogs), is going to figure out how to get the door open and I fear Zia will kill her. And there's the whole allergy thing." I looked around my house. I have two girls I adore. Was my house and my heart and life big enough for a kitten? I decided it was and I offered to take the kitten if no one came forward.

Becky pushed everyone at the hospital where she worked. She showed countless people the photos. No one wanted her. So, the day after I arrived, she and Jon came to Carole and Larry's to play games and to bring this little gal, who I was taking home with me. I couldn't come up with a girl's name. I struggled and struggled. I always told myself that if I ever got to name a female cat again, she would be called "Rosalind", after the main character in Shakespeare's As You Like It, one of my favorite plays. But, as I drove east, it just didn't sit right. I finally settled on "Esme", for "Esme Weatherwax", a character in Terry Pratchett's Discworld series. I don't really like Esme, but nothing seemed quite right.

"The naming of cats is a difficult matter. It isn't just one of your holiday games." --T.S. Eliot; Old Possum's Book of Practical Cats.

We put the kitten in my bedroom with food, water and her litter box. The bedroom was about twice the size of the bathroom, plus, there were windows she could look out. She warmed up to me almost instantly and spent half of the night sleeping either on or next to me. We let her come out of the room, supervised, the next day. Carole's cats were unimpressed, except for Jacen and Jaina. Jaina was upset and hissed, growled and spit at the kitten when it came out of the room. Jacen, on the other hand, was really excited to meet Esme and the two of them chased each other, tumbling around on the carpet under the bed. Becky had done a very good job of socialization. There was one problem. This was not a girl. This was a boy.

We had a huge laugh. In Becky's defense, she'd never cared for kittens so had no idea what to look for, shall we say. Well, that changes the naming convention, doesn't it. Esme Weatherwax went right out the window. Immediately, I knew what his name would be, "Hamlet". I don't know why; I just knew. My first cat had been named "Shakespeare". This felt right.

On Monday, July 18th, I left Virginia at 5 in the morning with a kitten under the passenger seat of the car. That's where he stayed the entire trip home, coming out only to use the litter box and to have food and water. When I stopped for food myself, I would check on him. He was quite the trooper. The next day, he went to the vet. 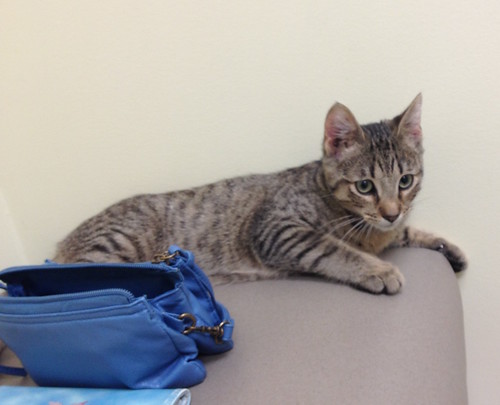 Becky had mentioned she supplemented the wet and dry food with milk supplement for kittens for the first couple of weeks he lived with her. My vet was impressed. He seemed healthy. She felt he was around 4 months old which would be consistent with his size and needing milk supplement when Becky found him. We drew blood to check for feline leukemia. He had ear mites, which was to be expected and he also had fleas. I wound up having to treat everyone for fleas from July through last month. But other than those issues, he's a healthy kitten. 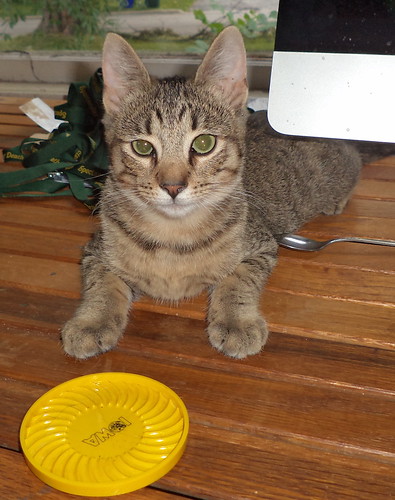 He spent the rest of July and most of August living in the office. I would go in and play with him but contact with the girls was minimal. I would put him in my bedroom and leave the door open so the girls could go into that room and smell his scent. After being in the office for a month, I let him out when I was home. Over Labor Day, I let him out at night, too. No one was allowed into the basement through the month of September, something Pilchard was not pleased with. My rationale was that he needed to learn his name and to come when I called. There are so many hiding places in the basement. One step at a time. He was spayed in September, getting the rest of his shots at that time, too. 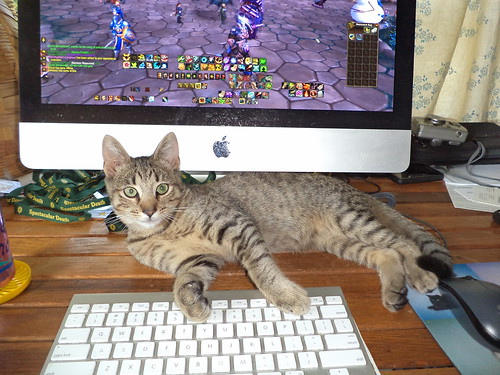 There was a lot of hissing, yowling and growling. I opened the basement up in mid-October and allowed Hamlet to go outside during the end of October, when we had some wonderfully warm afternoons and weekends. 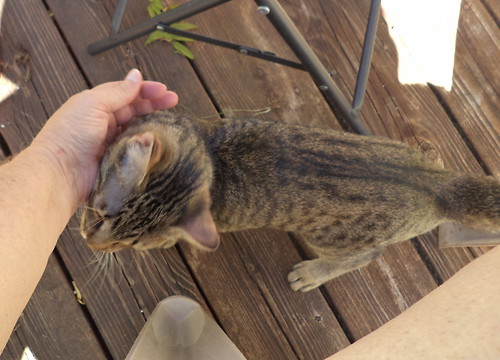 But have I made the right decision? Mija and Pilchard are not happy.