How Was Your Summer, Part 1

2016 was eventful on a couple of fronts. I had already planned to take a serious look at replacing the Jeep. Built in 1997, it was entering the end of its life. I said, back in 2002, when I bought it, I would probably drive it until it died. I'd saved and I had my budget ready. September is when cars are, historically, priced lowest because the new year's models are coming and dealers have inventory they want to move. I would start the process then.

I didn't spend much time looking at cars when I bought the Jeep. There wasn't much, in 2002, to find on the Internet. I had done some research, but all I knew is that I wouldn't be buying new. That new car smell makes me physically ill. I picked a street where I knew there were a huge number of car dealers and just drove along. The Jeep was parked by the street in a Volkswagon dealer's lot. My mechanic gave it a green light and it was right in my price range. The whole thing took 3 hours from start to finish.

Buying a car is just not fun. In spite of all the "helps" from various sites, like Carmax, it's still not a fun experience. But I knew I would have to do it. It was in the back of my mind every time I took the Jeep on an excursion. I headed west, to Bangor, Wisconsin, at the end of June. Things were going fine, until they weren't. The Jeep died as I was getting off Interstate 90 at the Bangor exit.

Now, you have to know this area of Wisconsin is a cell phone nightmare. There are so many hills that dead spots for cell phone service are everywhere. I couldn't raise my towing service but I remembered, from the day previous when I'd come this way, there was a car dealer, Wehr's Truck and Auto, a walk down the road. I headed that way.

I explained my problem. They arranged for the Jeep to be towed to a mechanic with whom they worked because they had no room in their repair shop to even look at it. I could hang out in their show room until he'd had a chance to look at the car. They overheard me talking to the homeowner whose house I was to inspect. They knew him and loaned me a car so I could get his inspection and an adjacent one done. I had an inspection for later in the day and they were fine with me just hanging out.

So, I got the inspections done and came back to the show room. There was still no word on the Jeep and it was now 11:15. The dealer called the mechanic and was told there were "issues" but they would have an answer in an hour. They called an hour later and said the best they could diagnose was the fuel pump. I should come talk to them about the problem.

The dealer said a fuel pump is an $800-$1,000 repair. "In a Jeep of your age, they have to pull off the gas tank to get to the pump. In later models, the pump is off to the side to make it easier to repair. Then, they would need to test it to make sure it's the pump. He's tested your electrical system and the battery, but they cannot get the Jeep to start." I was crestfallen. "I don't know what to do," I said. "If it were me, I'd say put that money toward a new car. Of course, that's going to sound like I'm itching for a sale, but I'm being honest. You don't have to buy from me. You can go back to Chicago, but, really, get a new car. We'll take the Jeep, as is, for $150 toward a car off the lot. Go talk to Jason and have him walk you through the process."

I took their rental and went to the shop. Jason was nice and he showed me what they had done and what they had and had not been able to determine. "It's an $800 job, assuming the fuel pump is what's wrong. Also, I can't get to it for a week." He gestured around his shop which was full with three cars sitting outside. I thanked him and went to get lunch, to think.

On a napkin, I wrote out my budget. I had leeway, but I was secretly hoping to get the Jeep through to September, so I'd have more money for a down payment, to cut the amount I'd need to borrow. I could afford car payments of a certain amount. My credit is still not very good, thank you Fifth Third Bank, but I would be able to get a loan through my bank. I called them and waited. I was approved for a loan. I just needed to tell them how much and give them the VIN of the car I would buy.

I went back to the dealer. "I've done the budget and let's see what you have." There were several used cars from which to choose. He suggested a 2011 Jeep Compass. I took it out for a test drive and loved it. Room. The SUV part would be great for the few times I am on construction jobs or have to go into a quarry. I didn't drive anything else. "Sold."

There was an issue with paperwork. My bank does not have a branch close to Bangor, Wisconsin. The dealer handed me the keys and my copies of the paperwork. "Take this to your bank tomorrow. Get your loan and have them send everything back to us. Include the title of the Jeep. I don't think you're going to welch out on us. I'm sorry you're in this predicament in the first place, but this will be a very good car for you. We'll probably wind up scrapping the Jeep and you'll not have to worry about it anymore."

So, I drove back to the mechanic to clean it out. 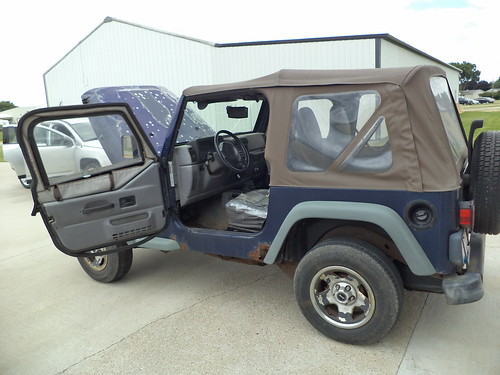 So many things were wrong with it. I was on borrowed time. There was body rust. The windshield had cracked due to rusting of the frame around it. In order to fix the windshield, I'd have to replace that frame. The U joints holding the chassis to the frame were rusting. Sometimes, there was a small shudder if I had to stop suddenly. I'd had the U joints replaced once before. If they rust through. The chassis will stop but the frame won't. It will be a Flinstones car.

The heater fan didn't work except on medium and then only about 65% of the time. When I got heat, it was a lot but this fan issue meant the defrosters took a long time to clear the window. The front seats were all cracked and I'd covered them with duct tape for the third time. The rubber cap around the stick shift was so old, it froze when the temps got below 15 so I had simply popped it out. You could look down the shift well and see the ground.

The back bumper was loose on the right side although my mechanic had bolted that to the frame. The top was still good, although the windows were getting cloudy as plastic windows do. I only took off the windows now because it was just too hard for me to remove the top only to have to put it back on in 24 hours. You can see the seal below the driver's door had come loose. You can put it back into the track using a spoon. I knew there were better things to do with my time. I would need new tires if I kept the Jeep beyond September, if I couldn't find a new car.

I cleaned everything out. 14 years. It's been my friend. I've gone everywhere with it. I remembered driving through a corn field in September, mowing down the stalks. Driving out of my drive when there was 6 inches of snow? Pffft. Engaging 4-wheel drive and making it through icy roads and running topless in the summer. I ran my hand over the side. I knew I was doing the right thing.

This is the last photo I have of the Jeep. 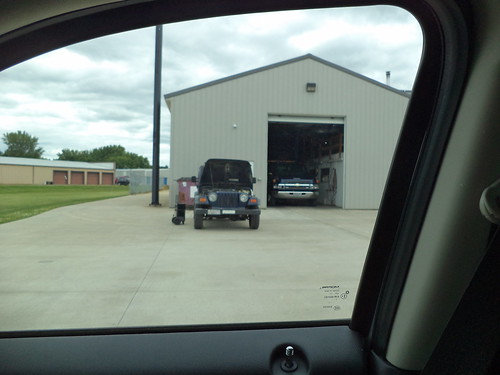 We tried to get the license plates off it. The back one was rusted to the bumper. The front one, which would come off, was longer than the bumper so it had been bent backwards from all the years of driving over and through things. "I'll just get brand new plates," I said.

I felt sad as I was emptying everything from the Jeep. It wasn't until I was on my way home that I realized I'd forgotten the Hawkeye car mats. But they had seen better days, too, so I put them on my birthday/Christmas list. The sadness didn't stay long. 14 years is a long time, but I think I had made my peace with getting rid of the Jeep. I drove away in a Jeep Compass with a huge amount of space. I could afford this. It was a good car. Things were going to be okay.