It's become something of a meme, the tagline, "For Science!" I believe you can credit the former "Mythbusters"; Jamie Hyneman and Adam Savage; for making science popular. Bill Nye, the Science Guy, was just a name and Mythbusters made the scientific method center stage in crazy and enlightening ways.

It's wonderful, really. I was blessed to have science teachers in high school who felt we were better people by applying scientific analysis to life. And I feel growing up during the active space race, made science extend into all areas of life. "What happens if..." was the way we lived. We never yelled, "For Science!" when we tossed something crazy into the burn barrel, but we loved the pretty colors when we burned the Sunday comics. We now know the resulting colors were not so good but it was cool. Kids who chose chemistry or biology were just as revered as kids who were athletic. It seems like a different time and place.

I find myself curious about the world around me and during the frigid temperatures of two weeks ago, decided to conduct an experiment. I wanted to see if I could make Dr Pepper slush. Now, let's set aside the slush mugs you can buy on the Internet. Yeah, yeah, yeah. Turns any beverage into slush. I wanted to see, with the below zero temperatures at night, if I could freeze Dr Pepper cold enough that it slushed, not frozen completely.

There are also several YouTube instruction videos for making soda in a plastic bottle instant slush. I've tried the instructions, several times, and have failed every time. I'm not sure what I'm doing wrong, but if I really want slush, I'm going to have to get a mug. Here is the record of my experiment.

First of all, all I had was Dr Pepper in cans. If you have ever, ever, frozen soda in cans or attempted to freeze soda in cans, you know this is not the proper container for that experiment. I believe I have cleaned up only 3 explosions in the freezer. I know better and always set a timer. I wasn't sure I would achieve slushiness so I emptied the soda into this plastic cup. 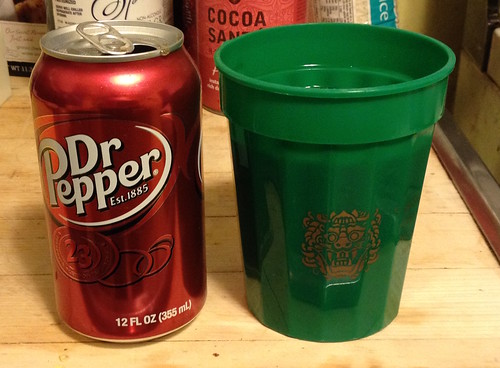 There is more than enough room for the soda to expand. If you don't know, liquid will expand when frozen and in a closed can, it will explode the can because the energy of expansion exceeds the walls of containment. (Science, you see. 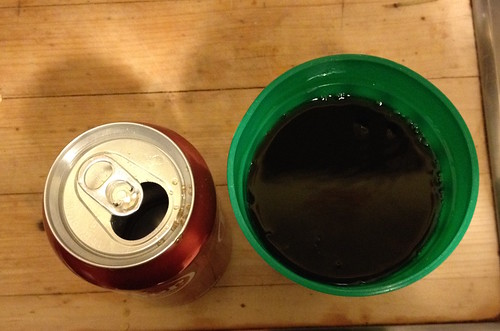 Ample room in this cup for expansion. I thought about a glass glass, but I had grave concerns about temperature differentials. If I am able to partially freeze the Dr Pepper and then bring the glass into the house, will the sudden warmth of the kitchen, even putting this in the well of the sink, crack the glass? I looked in the cupboard. I have a few glasses I'm not that attached to, but cleaning up a broken glass was not something I wanted to do. Therefore, I decided to go with a plastic cup which would be able to withstand the temperature differential better. That cup is decorated with my World of Warcraft guild's emblem. It's a great cup. 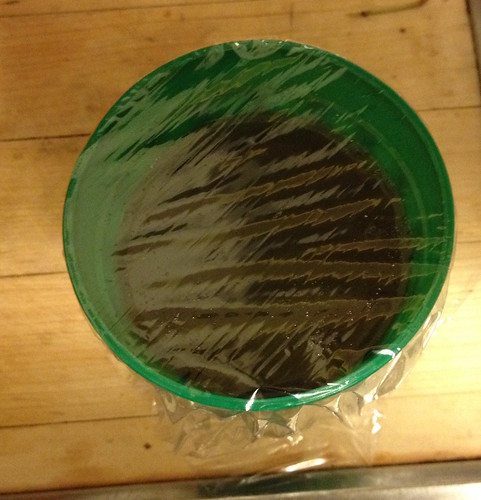 I realized, as I poured this out, that the Dr Pepper was going to lose its fizz, if left uncovered. That's the whole reason it's vacuum sealed. I covered it immediately with plastic wrap, sealed as tight at possible around the edges.

Ideally, I wanted to sit the cup on the deck railing but I can't get the back door open. It was, at that point, frozen to the threshold. I had a rug shoved up against the bottom and that had frozen to the bottom of the door. On the outside, you could see the ice. The back door needs to be removed from its hinges, the whole frame readjusted and the door rehung. It's definitely a spring project. So, I looked at the front door. 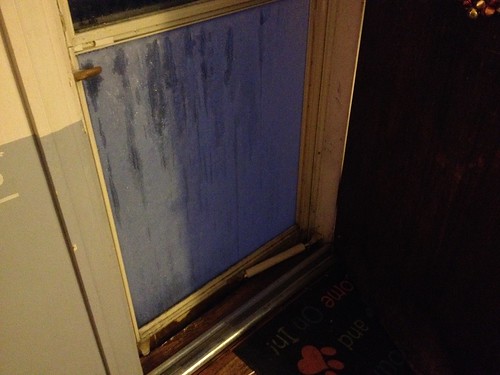 I probably should have put the cup on the milk box outside but I thought I'd see if I could get the soda to freeze just between the doors. The threshold of the house door is very good and there is little cold air coming under the door when it is closed. It was cold here, but was it cold enough? 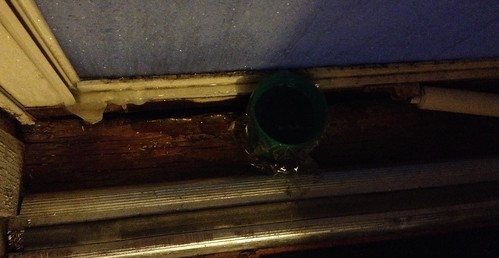 I set the timer for an hour. It took 3 hours between the door before I got any kind of freezing. Between hours 2 and 3, it started to freeze and I got this when I pulled it in. It wasn't slush. It was ice and was freezing. The top 2 inches was large ice crystals of Dr Pepper. Below that was very cold soda. 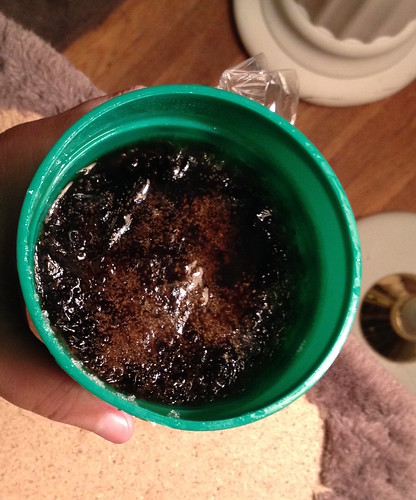 Unfortunately, it was flat. I think that was partially due to my checking on the process every hour and removing the plastic. I also think that's part of the nature of freezing soda. The "carbonation" doesn't last. When you consume slushed soda, you're not interested in the carbonation. The flavor and the texture make up for that lack.

But when you're doing an experiment like this and I remembered the times I got nearly frozen Dr Pepper by forgetting a can in the freezer, it seemed like the carbonation was gone or nearly gone from that, too. I'm thinking you can't freeze fizz. If you, like me, like the fizz, freezing soda isn't going to give you that tickle. The Dr Pepper actually tasted rather foul and I wound up pitching it. That is, perhaps, an experiment for another day. Would it be foul tasting if I partially froze it in the can or bottle?

I'd also like to find out how long it would take to freeze a can or bottle at negative temperatures. I know it's kind of akin to just sticking it in the freezer part of the fridge, but I'm curious simply about air temperature. And yes, there are probably reams of information somewhere in the vastness of the Internet which would answer these questions, but I like to conduct the experiments myself.

The weather has turned mild now, for January, which I do not mind in the least. So, answers to these and any other experiments involving cold and soda will have to wait. Plus, I'm not buying any more soda until maybe the first weekend in February when that one sportsball event takes place and every junk food and soda on the planet is on sale.