How Was Your Summer, Part 7

Mija and Pilchard were very unhappy through August and into September, as Hamlet learned the house. I've talked about how I know when I'm being "yelled at". The tone of the meow changes. I heard that alot.

The three of us were not prepared for a kitten's energy. He ran everywhere. He pounced. He jumped. He attacked. I felt, on some days, that all I did was break up fights. Pilchard, especially, was not happy. 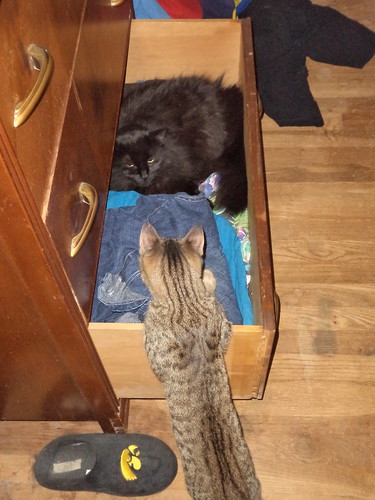 I spent a lot of time saying, "Hamlet! No!" Sometimes I wonder if he thinks that's his full name. He took over Mija's spot in the recliner...

...which angered her to the point that she followed me around one day, for a full hour, meowing angrily. I sometimes felt I wasn't giving the girls enough attention. It's hard to spread myself equally when I see a belly just ripe for rubbing. 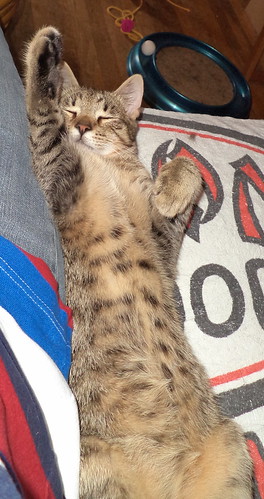 We had an issue with sneezing at the beginning of fall. The girls didn't catch anything so we considered he had some kind of allergic reaction to something.

He learned, by the end of September, what time I came home and I would see him in the window of the office, waiting. 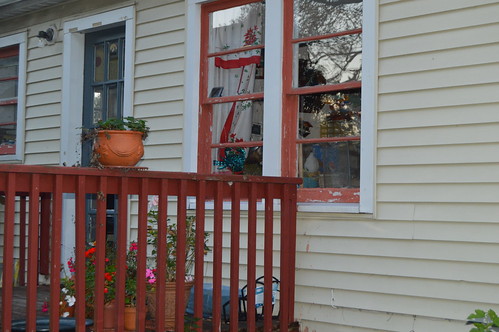 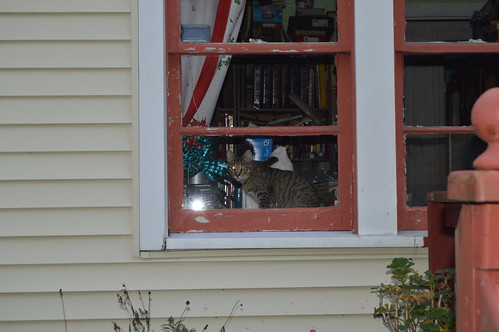 Or he'd be by the back door. 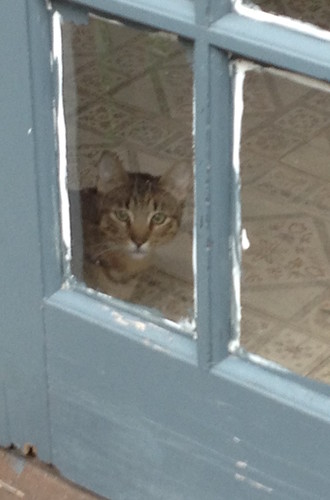 This was very poignant for me because Rascal, who looks a lot like Hamlet, used to do this, too. Having been outside, he tends to try to sneak out, but he knows his name and he goes inside after my getting really mad at him for leaving the deck.

He follows me downstairs when I do the laundry, but when I say, "Hamlet, upstairs," he goes. He discovered the laundry chute and that's the best thing in the world. He goes down the chute and onto the top of the furnace where it's warm. He follows me into the bathroom and will come running from anywhere in the house if he hears me go into the bathroom. He likes to sit on the edge of the tub when I shower which can result, as it did yesterday, in him falling into the tub during the shower. I had to get another toothbrush because he chewed on the one in the holder. That's now his and I keep mine in the medicine chest.

Any food, ANY food, I have, he needs to see, smell, taste, touch. 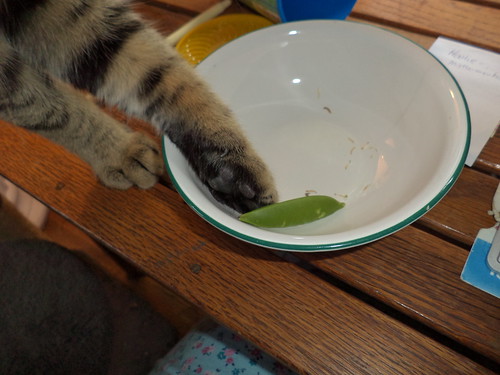 I was worried because I caught him lapping down some of my room temperature tea. The vet said that's okay. He's also stuck his nose in my Godiva liqueur-laced hot cocoa, which is less good than tea. He doesn't get that cats don't eat a lot of things people do. If I'm eating it, kitten needs to investigate.

Things have slowly, slowly, settled down. During football season, when I'm streaming games on the computer or watching them on TV, he learned that mom gets excited and the best place was not the living room. It was really quiet one afternoon so I went into the bedroom at half-time and found this. 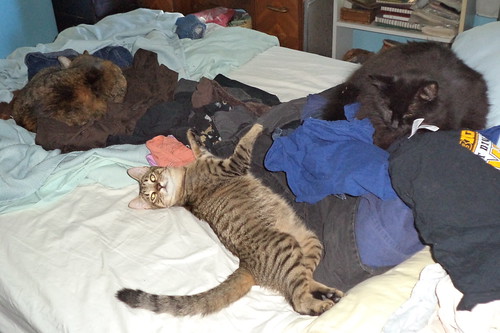 I was shocked as the girls appeared to not want anything to do with Hamlet. Two weeks later, I caught them doing the same thing. It's not all the time and usually when there are clean clothes, but this is still done. 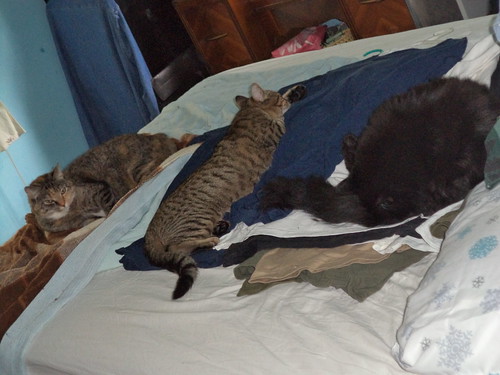 And we all co-existed when we were all outside on the deck in those last warm days of fall. 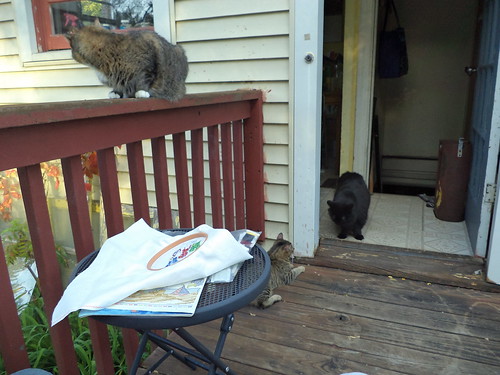 He sleeps with me, usually next to my legs. Sometimes, he will climb on me, lie down and start purring. That lasts for about 20 minutes and he wanders away. He will also lick my chin which isn't all that appreciated at 2:30 in the morning.

We have made our peace. He recognizes Pilchard is top cat. He has a tendency to jump Mija, something I am trying very hard to break him of. I have caught both girls chasing him, Pilchard moreso than Mija. We've reached the point where he will see Pilchard in the hall and I'll hear that little trill cats make to communicate with each other. He'll lie down and the two will wrestle.

It's been trying. There is no question about that. I was unprepared for kitten energy. His nickname is "Kitten Britches" or "Britches" for short, but mostly I use "Hamlet" as I don't want him confused. My house looks like a pet store's toy department exploded. He started to bring balls back when I tossed them, but he hasn't in some time. I guess I need to work with him. They all did well when I went to Virginia in November. The guy I hired said they all came out to see him when he came to feed them. Hamlet is into big cat food now. I have to feed him in the bedroom because he will shove the girls off their dishes. I'm hoping he'll grow out of that. 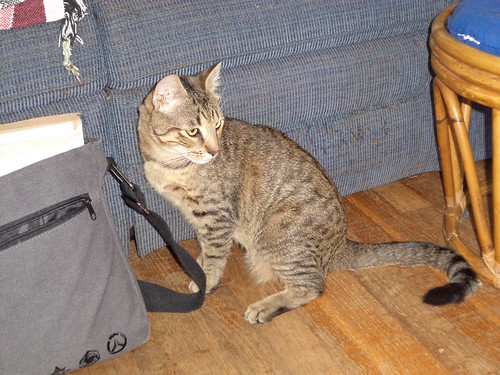 I know I did right by this guy. For all the "Hamlet! No!", the boops on the nose, the chasing, the growling, the extra expense for food and vet bills, my life is much more with him in it. Thanks go to Becky for recognizing a plaintive meow and rescuing him. When he wants to snuggle, which the girls have never wanted to do, any and all stress I could have melts. 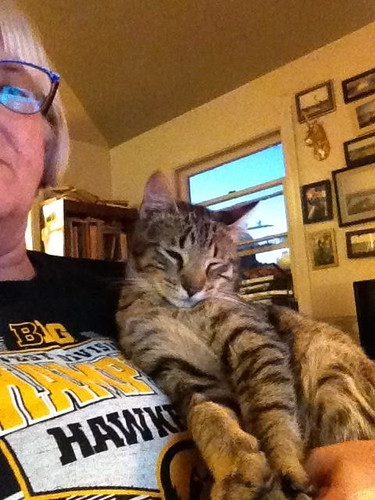 He's something of a celebrity within my World of Warcraft guild, too. "ARG! Life with kitten britches!" "What did he do now?" How could anyone resist that face? I sure couldn't.