When computers were just taking off, the Minnesota Educational Computing Consortium (MECC), created one game which, above all others from that era, gets looked back on with incredible fondness. It was called "Oregon Trail". It was based on the Oregon Trail, the route settlers took from Independence, Missouri, to the Willamette Valley in Oregon. You could join the westward migration from many different points but Missouri to Oregon was the most popular and, given the privations of that time, there was safety and security in numbers.

If you had a computer in the 1990's, you probably had Oregon Trail. The premise was to get your wagon and family to the valley. Along the way, you had to ford rivers, deal with cholera, measles, dysentery, food shortages. You would restock at towns and forts along the way. In real life, if you left too early, your wagon and oxen were bogged down by spring rains. If you left too late, you'd have to cross the Rocky Mountains in snow storms. The infamous Donner party headed along the trail but turned, as some did, to head southwest toward California.

I know we had Oregon Trail on our first computer. The graphics were pixels, square boxes which depicted everything. There was a mini-game where, if you had bullets, and you could run out of those, you could go hunting when you would stop. It was such a fun game and the insidious "learning" that came with it made the game even more special. I know the computer lab at Carole's grade and middle schools had Oregon Trail for kids to play who did not own computers. I spent hours playing it, trying different times of the year to leave, and how long can I go without hunting before someone starves. 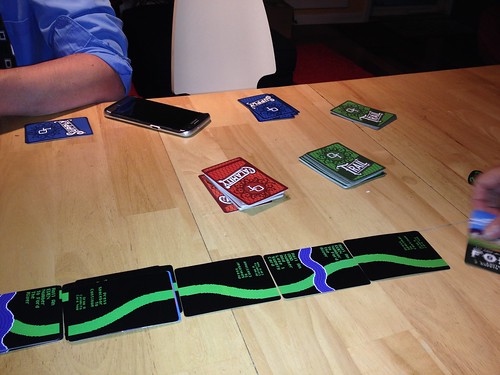 The graphics on the card are pixelated and are fairly close to what you remember from the game. The challenge is the same; stay alive and get your party from Independence to Oregon. Along the way, you encounter the same challenges as the computer game gave you. The difference here is that you are working together to get at least one member of the party to Oregon. You lose if everyone dies.

Everyone gets "Supply" cards. These are the various things, like food, clothing, medicine, you'd need to ameliorate the "Calamity" from those red cards. The trail is the green snaky line and look. There are rivers to ford. You do that with a roll of the dice. When someone has to draw a calamity, the group pitches in to, you hope, stave off death for another few rounds.

Ah yes, death. Some things, like measles or cholera, can be fought with supply cards; medicine and clean water. But there are something things you have no hope to survive.

Some of the instructions are a bit hazy. The game lends itself to "house rules" and can be played by any age from 10 up. It's for 6 people and does not work very well with 3 or less. The best hands were with 5 and 6 people.

It's also not very expensive. Target was, for a time, the only retail outlet carrying it. When released, last September, there was a rush to get it and, for a month, you couldn't find it anywhere. By Christmas, it was in ample supply. I think Target is still the cheapest place for purchase. I gave it to Carole for her birthday and to April and Perry for Christmas. I don't have a copy. I should get one.

If your kids don't know about the Oregon Trail, this would be a good way to start the conversation. Ruts from the wagons are still to be seen in Kansas and Nebraska. We have no concept of what it took to move a family of 4 across a country people knew nothing about. It's a fun game and, just like the old computer game, educational. *Gasp