How Was Your Summer, Part 2

In my new-to-me Jeep Compass, I drove away from my old Jeep, full of excitement and happiness. I could afford this car. This was going to be okay. I was stressed; it had been a horrible day; but people had been kind and helpful and it was all going to work out in the end.

There was a 3:30 inspection to perform in the same area as the morning inspections. The road on which these inspections occurred was being rebuilt. Beyond this last house, it was impassible unless you were on an ATV, because they were widening it and that involved some blasting of the rock face of the hill. It was quite the mess. Before this area, the road was being resurfaced, with new guard rails and signage. It was, in places, single lane.

Since I'd driven this the day before, I knew where they were, in terms of resurfacing. I knew where the two-lanes went down to one. I fell in behind a tree service pulling a trailer. From the dealership, it would be a 5 mile twisty-turny drive to my 3:30 appointment. I would be getting there a bit early, but we are trained to be early to a job, never late, if we can help it. The homeowner had said to just park in the drive if I got there before 3. I had a book. I was good.

We came to a "y" intersection. One road went to the left, up a hill. The road I needed to travel went straight. Up ahead, there was a small bridge and the resurfacing had reached just beyond the bridge. There was a small incline down toward the bridge and there was a flagger. To my right, a guy was on a roller, compressing the asphalt. The truck in front of me stopped. I stopped a car's length behind him. I knew we might have as much as a 5 minute wait, but I was good. I had a book.

Suddenly, the truck in front of me started backing up. I laid on the horn. The gal flagging the road to the left, threw down her sign and started screaming. The guy operating the roller, stopped and started yelling. There was impact. 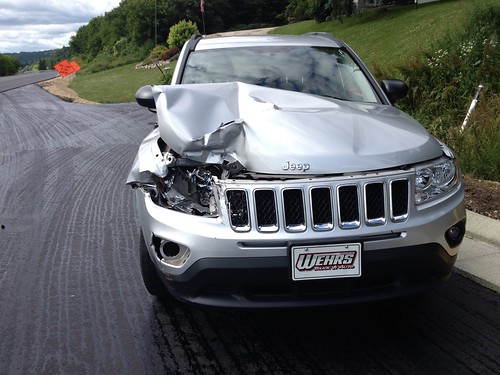 The trailer was just the right height to go into the headlight and crunch up the hood. 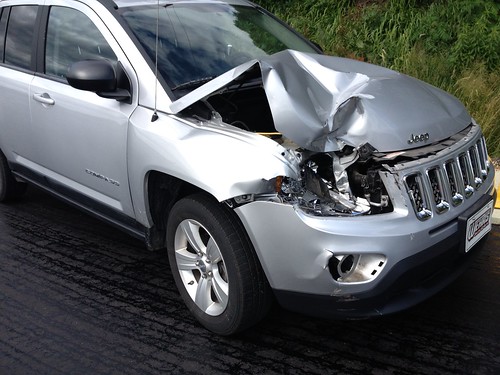 The motor died immediately. The hood folded like a piece of paper. I thought, for sure, the guy was going to keep backing into me, but he stopped after 10 seconds. The guy on the roller yelled at the gal to call someone's name and tell them to close the road and get the sheriff out here. She came running down the incline to ask if I was okay. I was so shocked. I got out of the car, as she radioed back to whomever was the job site superintendent. The driver of the truck got out and walked back towards me. I opened the door and slowly got out.

The guy from the roller looked at him. "What the fuck were you thinking? How the hell can you drive down a road under construction, pulling a goddamn trailer and not know who the fuck is behind you? You are either the biggest asshole on this planet or the stupidest. I don't know which." (I can hear his voice in my head as I type this. I'll probably never, ever forget how loudly he screamed.)

The driver was a mid 20-something who had a friend or maybe co-worker with him. He looked remorseful. "I take full responsibility for this. This is completely my fault." I just stood there and looked at him. "Where can I call the sheriff? My phone isn't picking up a signal." The gal pointed up the left road. "You'll have to walk up that way to get a signal." He and his buddy headed that way.

"Are you sure you're okay? You look shocked."

"I am in shock. I just bought this car. I have to take paperwork to my bank to get the loan fully signed. How could this happen to me?"

"Oh my god. I am so sorry," she said and gave me a hug. The guy from the roller said, "Look, we saw the whole thing. It is clearly his fault and I'll tell the sheriff that."

Given where the accident occurred, it took the sheriff 20 minutes to get there. I sat in the car and read. The crew chief showed up and went over what happened, asked if I was okay and radioed for a tow truck. I heard him say the tow truck takes priority over any other vehicle so the road could be reopened since you couldn't drive on the right, on the new asphalt.

The sheriff who responded was very nice. He explained, after talking with everyone, but not me, which I thought was strange, the driver would be cited for failure to securely back-up and one other road infraction which escapes me, at this time. He hung around until the tow truck came. We took the car back to Wehr's. He said I was the calmest person he has ever met in an accident. I told him there was no point in screaming at the guy. It's clear what he did. Screaming won't make the car any better. I said I knew he was going to get cited and it might cost him dearly. My focus was on getting the car taken car of and being upset wasn't going to help that. He looked at me and said I was the smartest person he'd ever met under these circumstances. I had a hard time processing that because, to me, it seemed clear what I needed to do.

The driver of the tow truck was very nice; a good ol' boy from these parts. He knew the Wehr's "real well. Good people, them." Wehr's was aghast when we pulled in, but we agreed they would take responsibility for the car since it, technically, wasn't mine until the bank had signed off on it. They drove me to the LaCrosse airport where I rented a car and drove home. It wasn't until I got home that I burst into tears.

Renting a car was going to be an expense I had not counted on in the budget, but then, I hadn't counted on needing to buy a new car. I had already made reservations for a rental car to take me to Virginia in mid-July. It was a lot to process. The good thing now was I was home. My boss had said to come in when I got the car handled in the morning. I would make a follow-up appointment with the 3:30 pm homeowner for the following week, since July 4th was looming and this would get straightened out. It was this guy's fault and I was positive the dealership was going to go to bat for fixing the car. I still wanted it, even with the accident, because it was a good car for me. I just had to trust things would be okay.