How Was Your Summer, Part 3

It was a, mercifully, quiet July 4th. I was terrified of driving anywhere in the rental car so I think I drove to the grocery and a couple other errands and drove home. The insurance company of the truck driver had called to make sure I was okay and to go over the steps to getting the car fixed.

"We're going to make this right," the gal said. I asked her to put things in an email, so, if my insurance company asked about anything, since the sheriff had taken my information, I would have it all in writing. That was done. All that was left was to wait on the inspection of the Jeep.

On July 6th, Wehr's called. The appraiser had totaled the car. He said there was engine damage, something I wouldn't have been able to determine since I don't know cars. They would give the dealer the full value of the car as it had been on the lot, or they would pay him the scrap value for him to fix it. He told me, when a car is "scrapped", even fixed, I would have a tough time convincing the bank there wasn't something dreadfully wrong with it.

I was heartbroken. I had pinned my hopes on that car. It was so perfect. Now, I felt real rage at that kid. My mind echoed the words of the roller guy. "How the hell do you not know who is following you?" Your driver's license should be shredded and your momma should drive you around for 6 YEARS, yes, YEARS, so you learn how to drive, you sniveling piece of humanity. I was crushed. There was more to come. His insurance emailed, not called, the news that because I didn't own the car, they would not pay for the rental. I would have needed to get a rental because my original car had died. Because the dealer owned the car, he would be reimbursed. I sent them a copy of the email where they had agreed to pay the rental. I was told that was not official and was pending review. My insurance told me a claim for rental would increase my rates (which is probably not true and was their way of getting out of the claim) because I would be seen as having caused the accident even though I could get proof it was not me.

That night, I cried for a couple hours. I've always felt a little snake bit, if you will, by life. This was yet another example of kicking me while I was down. It hurt so much. I would have to find a car. I stumbled into the office the next day, keeping my personal issues silent. Mike asked if I was okay. I simply said, "They totaled the car. I have to find another." He said, "Take all the time you need."

About mid-morning, Wehr's called the office and said the paperwork to scrap the Jeep had arrived. They knew that was heartbreaking for me. They did have, on the lot, two other cars I'd maybe like to consider. They were cars, not SUVs, so they didn't know if I had my heart set on another SUV. I called Carole and apprised her of the situation and she pounced on car research. She looked at both of the cars Wehr's suggested and looked at cars within a 50 mile radius of me. She found some, but one of the big issues was, what to do with the Jeep. I'd have to find someone to tow it back here to be scrapped or find someone out there willing to pay me $150 for it. Wehr's was still willing to take the Jeep.

I talked to the bank. They approved me for a higher amount if I wanted to buy either of the cars Wehr's had. I thought about it; really thought about it; and talked it over with Carole. I decided to test drive a 2011 Chevy Malibu Wehr's had on the lot. It was low mileage and nothing wrong with it. It was $3,000 more than the Compass, but the low mileage was attractive to me. I drove to Bangor on the day I was to do the final inspection to give it a test drive.

I loved it. Carole said the other car they suggested, a 2013 Chevy Impala, might be better because it was bigger. It was the same price, but it had double the mileage of the Malibu. I called my bank and they talked with Wehr's and we agreed to do the same thing as before. I signed everything I could there. They faxed everything to my bank. The next day, I would come in, finish the paperwork and they would next day everything back to Wehr's. We joked about how I probably needed to stay 4 or 5 car lengths behind "kids" pulling trailers. I dropped off the rental car and came back for the keys to my new-to-me car. 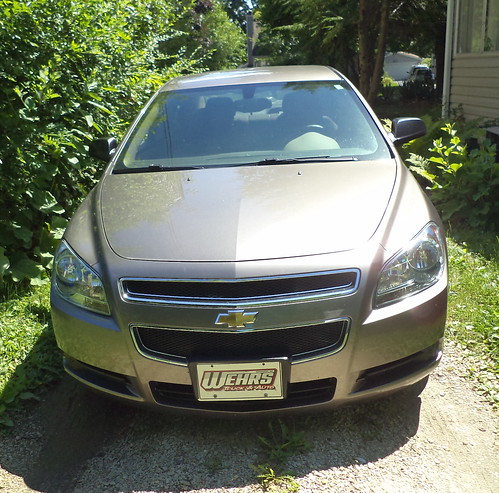 I finished the inspection, which had been rescheduled, and headed home. It was weird, sort of. I've been renting cars so much that I'm kind of used to a car, but there was a difference. This was mine. 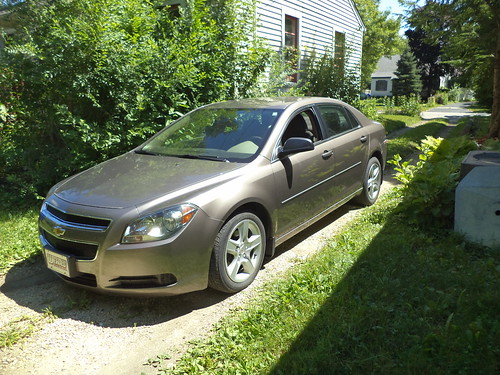 All the way home, I let that sink in. This was mine.