How to Trap A Cat, or Two

It's that time of year when the papers fly and you dread the application of time and math skills or your lack thereof. It's tax time. The last piece of major paper I needed arrived on Saturday so I spent last night sorting papers into piles to make sure I have all my documentation to do taxes this weekend. I use Tax Act which I found to be easier for me to process than TurboTax. Both still require that I have everything in order before I sit down. I have a tendency to use the "piling" system instead of a "filing system" which means I have to sort and then file the ream of paper generated from the last time I filed everything.

I was rather proud of myself. Although it appeared to be a huge pile, once sorted into the various categories, it didn't turn out to be that much, at least in comparison to some years. I also found a couple of pieces of paper I need for other things and discovered I could recycle some papers I no longer need to keep. The actual act of pitching stuff into the recycling bin is very cathartic.

I went to make tea to have as I actually filed stuff, not piled it back where it came from. When I returned to the bedroom, I found this. 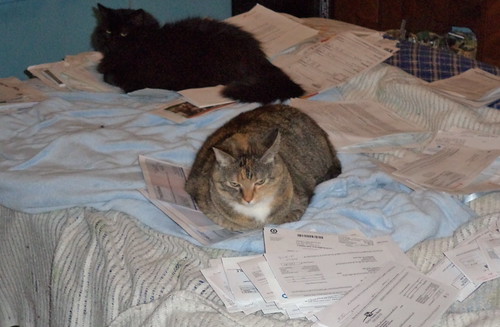 Put out paper of any sort and you've got an instant cat trap. They've been rather argumentative with each other lately. I'm not sure why. There have been some rather nasty growling and hissing episodes of late so to see them resting calmly in proximity to each other is gratifying. I can file this stuff later.