What a Stack and What a Gift

We arrived in Iowa in the late afternoon of Tuesday, December 23rd. Once we arrived, we unloaded all our gifts. My sister, who had arrived first, asked if we could help bring in gifts she'd picked up from my niece. Why sure.

It became clear that many of the gifts were in the same size box. So, for kicks and giggles, we stacked them. It came out to be quite the stack. Larry posed with it first. 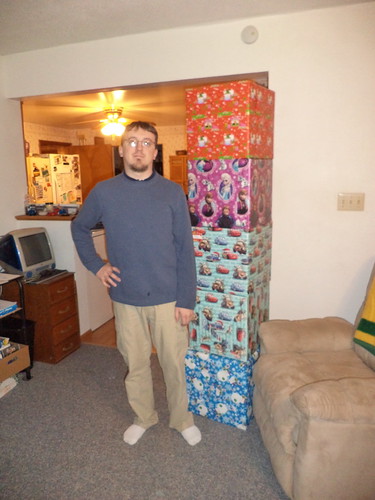 The next day, we added a couple more to the top and I had the three oldest great-grand kids pose by the boxes. This is Makayla.

I was surprised to see that the very bottom box was for me. We handed out presents "slowly" in an attempt to make sure the giver was thanked once the gift was opened. Yeah, right. With 5 kids under the age of 8, that idea was lost. We adults waited and let the kids shred the paper to get at the gift inside. Then, when there was a break in the action, so to speak, an adult would open a gift, show it off and thank the giver.

My niece, Christina, insisted that everyone watch as I opened my gift from her and her family, which includes the kids shown above. It just so happened that the blue paper box on the bottom of the stack was for me so the kids had opened their gifts way before me. You know it was the concept of "bigger box means bigger present". A future post will show the contents of the square boxes as it's a cute photo.

My niece told me to hold the box with the arrows pointing up. Well, when we stacked the boxes, we didn't notice the arrows. I mentioned how we just shoved the box into place and piled the other ones on top. She sort of winced. I couldn't imagine what would be in the box, which was quite light, that would cause her to wince. She made everyone watch. I ripped off the paper, popped the box open and was astounded by what I saw. 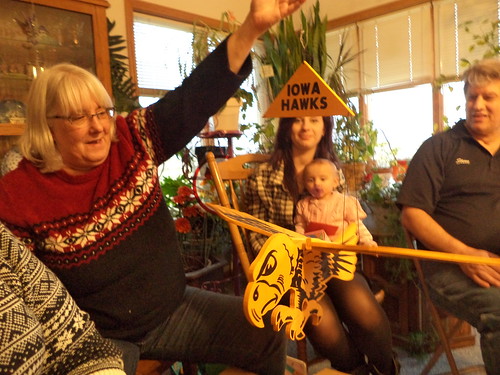 It's an Iowa Hawkeyes mobile. Christina said she found it in an antique store. It's huge. It looks homemade. This is the Iowa Hawkeye mascot that I grew up with. The current "Tiger Hawk" logo was introduced in 1979. She said it was one of those "aha" moments. "I saw it and knew it had to be yours." I couldn't wait to hang it up once we got back home. 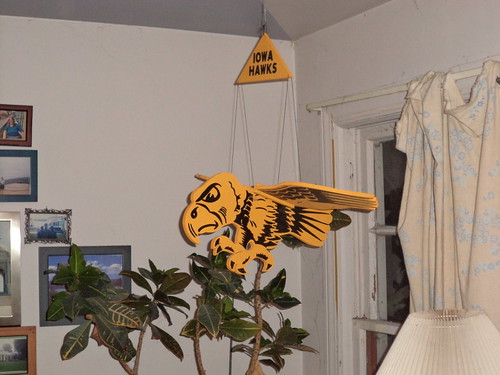 There used to be a faded paper star in this spot. I'd had the star for a long time. It had crossed my mind that changing the star to something else might be a good idea, that it was, perhaps, time for something else.

I wonder about the creator of this. Who was he or she? Where did this come from; an estate sale or did someone walk in off the street with it and sell it? I'm so thrilled with it.

Now that it's been up for over a week, I need to rearrange the plants under it. The zebra plant is so tall that the mobile rests against it. There is a spider plant, which you can't see, to the right below the lamp. I could swap places between it and the zebra plant. I need to assess the odds of a cat knocking the zebra plant over. I might, also, be able to rotate the hook in the ceiling, which would turn the mobile to face into the room. Then the feet wouldn't rest on leaves. Options. Options.

I'm so happy with this gift. It's a one-of-a-kind gift, made with all the love of a Hawkeye fan. Can't ask for a better gift than that.