I've lived long enough to watch computers go from something only a research institution or college had to something we carry around in our pockets. We've reached the age where everyone has some computer with them and it's uncommon to go into a restaurant, for instance, and see a group of people talking where not one is on their cell phone. Connectivity is demanded. Computer capability is taken for granted. But I still marvel at what is out there.

I get asked what I want for Christmas and long after the list has gone out, there are "oh crap, I should have added this" moments. In this case, I realized I could actually use a thumb drive, an inexpensive external storage device that I would use to store photos. 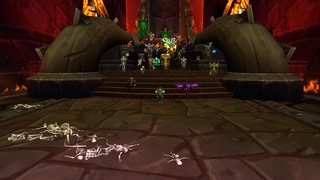 I take so many screenshots from my World of Warcraft's guild adventures. At any given time, there are a couple dozen raw photos which need to be cropped. I dedicate an afternoon to uploading the cropped photos to our guild web site and find that I haven't made much of a dent in them. I admit that I screenshot everything, but we have a record of the years this guild has been in existence and all the crazy things we've done. That leads to thousands of photos.

And this doesn't count the personal photos. I document so much. There are thousands of photos in iPhoto on my computer. I've always taken photos but digital cameras make taking them more easy and cheap. After the fiasco in December 2012, when my hard drive died and I lost thousands of photos of the guild and my life, I've been even more aware of the need to have my photos backed up somewhere. In my mind's eye, a thumb drive would have ample storage for a minimal amount of money, but I didn't think to ask for one. Enter the after Christmas sales.

Years ago, I bought a small external hard drive to back things up. At the time, I think I paid around $100 for it. It was the size of what is called a "trade paperback" book. Those are the larger paperback books. Gradually, technology left that kind of storage behind and I never got around to replacing it with anything as I didn't need more storage than what was on my computer. I still have it and would like to try to access it as it probably has old photos on it I'd like to keep. At the office, we have an external hard drive for all our photos. It's a bit bigger than a deck of cards.

Because I bought my Blu Ray player and my TV from Best Buy, I had "Best Buy bucks" to use up. I figured I'd just get a thumb drive and that would be it, but my son-in-law pointed out the best bang for my real and imaginary bucks would be an external storage device. After plowing through pages of offerings and reading reviews on Apple sites, I chose this one. 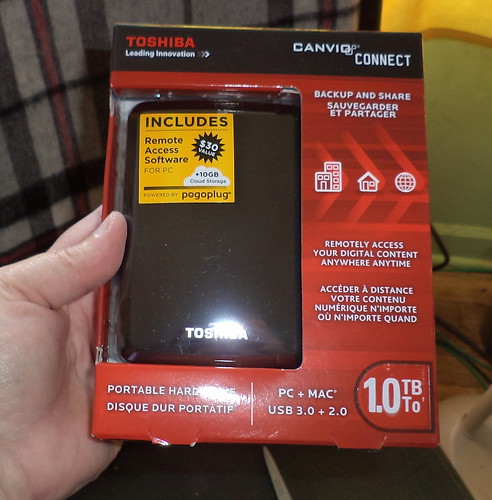 This is a terrabyte of storage and was less than half what I paid for my first external hard drive. This size was unthinkable when I bought the first one. I wasn't quite prepared for the small size. 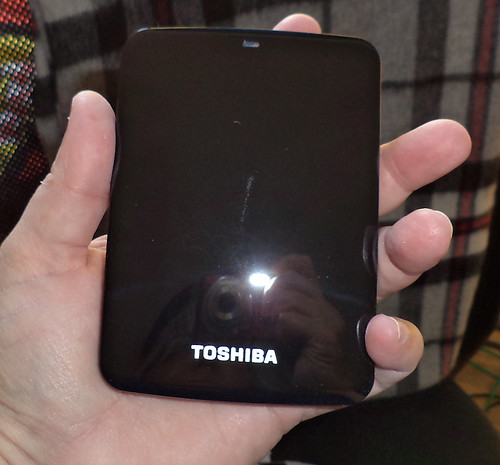 It's easily the same size as my cell phone. I opened up the instructions which were "Plug the cord into the drive and the other end into your computer". A couple years ago, I bought a hub, which has 4 slots. I wound up not needing it until now. My mouse and my camera's downloading cord are plugging into the 2 UBS slots in the Mac. I needed the hub to plug in the hard drive. The second I did that, the thing whirred to life. Instantly, up popped "Time Machine", Apple's automated software that backs up your entire computer, including the operating system. It provides a date and time stamp on every back up so, if you created something at noon on Friday, you can go back to that date and time and find the back up. Instant. I didn't even have to think about how to do it. My computer recognized the hard drive and started the system back up instantly. It takes no time at all to back up, now that the initial one has been done. Magic, I tell you.

I moved the folder containing processed guild photos to the external drive and then deleted it from my computer. In doing a system clean with the deletion, I regained 1.3 gigabytes of room. I haven't dented the storage capacity of the external hard drive.

When I talk to the 20 to 30-somethings in my guild about how marvelous this is, they give me a verbal pat on the head and send me on my way. I suppose, for them, the generation who has grown up with this sort of thing, my wonder is hilarious.

I think back to when our first home computer showed up. It wasn't very big and didn't have the processing speed of my cell phone, yet we were amazed that we could do all sorts of things with it. A lot is made about how we went to the moon with less computing power than people have in their cars. I held a terrabyte's worth of data storage in the palm of my hand and I wonder what I will be storing my photos on in 20 years. And also, what's the exponential term we'll be using for that kind of storage, quintillion-byte?