It's taken me some time to push myself toward my next sewing project. I'm going to try to use up the fabric I have in the boxes in the closet. There's such a low motivation to sew, though. It's this danged being tired all the time business. But, I broke down cleaning off the living room table into small steps and, every day, did one thing. I also told myself that dealing with the stuff I had piled on the table did not mean just moving it from point "A" to point "B".  I had to actually deal with the stuff. By Tuesday, I had cleared off the table and pulled out the new project.

My goal is to use up my Iowa Hawkeye fabric. Initially, I pulled this hunk out. 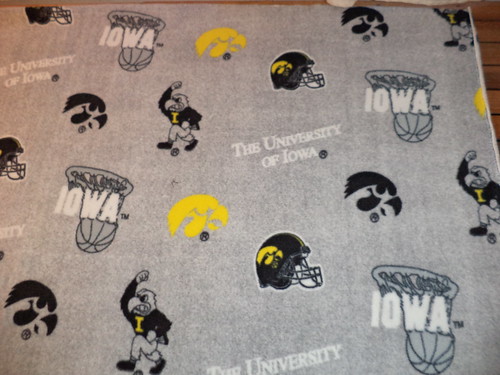 It's fleece. I have several pieces of Hawkeye fleece I've picked up over the past few years. This would be the first one I'd sew with. I'm going to use this vest pattern. 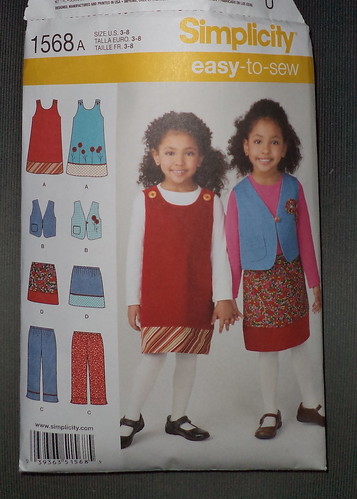 It's extremely simple; a front, a back and a pocket piece. It shouldn't take me very long to whip out 5 vests for the great nieces and nephews, all from Hawkeye fabric. While the child on the front of the pattern is female, I think the pattern could be considered unisex. The front is held together with a button put through a self-fabric loop. Instead of the loop, I'm going to attach elastic to the front. I think that will be easier for the kids to dress themselves then; much more give to the loop than fabric, even fleece. Plus, the idea of turning fleece was not appealing. When you've sewn as long as I have, you recognize what things are liable to give you more headaches than they are worth. Making a 3 inch long loop is one of those things.

So, I pull out the pieces for the vest. I'm not going to line them with a different color fabric. I'm gong to use the same fabric. All the pieces are 60 inches wide so there should be ample material to cut double of what I need, except for this first vest. This one has to be the biggest. After that, I'll come back to the pattern and make the next sizes down. I remember, when multi-size patterns were introduced, cutting the a middle size and then having to get another pattern to cut the larger size. You can always cut things off, but you can't attach them back on.

It turns out the gray fabric doesn't have enough to cut double the largest size vest from. I would have had to do some seriously measuring and replacement, things I don't want to do because I don't really need to do. Just change the fabric. I pulled this hunk out of the bag. 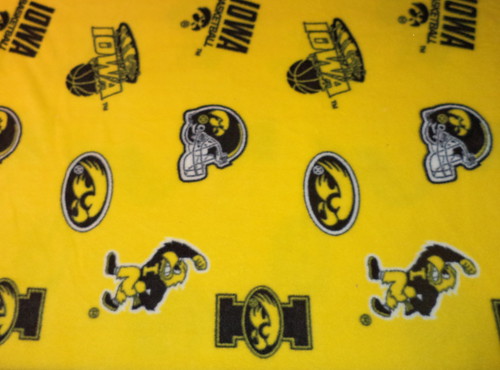 There's more than enough of this to make the first vest AND to have some left over. My goal is to not have any left over because I know how hard it is for me to toss material which may have some potential use down the line. The gray fabric will meet that criteria for a smaller size vest, but the yellow yielded a strip which has potential for something else. I trimmed off the excess and added the strip to the project box.

Tonight, I'm pulling out the sewing machine and getting that set up. The vests don't need interfacing so it will be about sewing the pieces together, turning them and doing some hand stitching. Maybe I can get one done and the next one cut out this weekend.

I think these will be fun for the kids. At the very least, the adults should appreciate them.

And, by popular request, here is the pattern I used to make Larry's shirt. 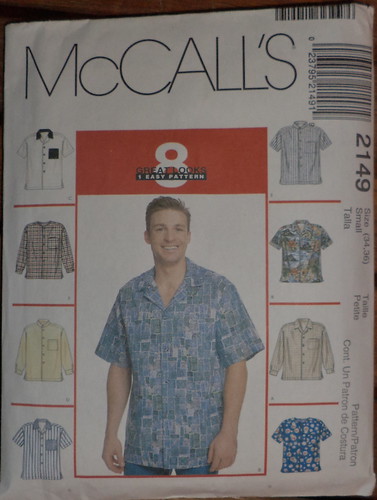 I like the style. I have some material which would lend itself to this pattern.