As if I needed proof that the cat house was being used, I got up on Sunday and looked out the office windows. 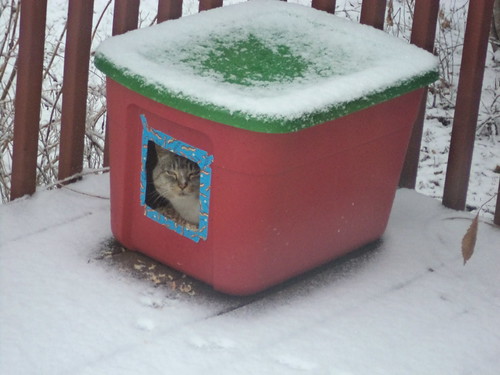 Although I wish I could convince her that I'm essentially harmless, except when giving wots of wuvs, it filled me with joy to know she was warm and dry. I fixed her food in one of the small Kentucky Fried Chicken side dish containers and took it out to her, putting it in the house. My hope was that she'd go inside to eat. 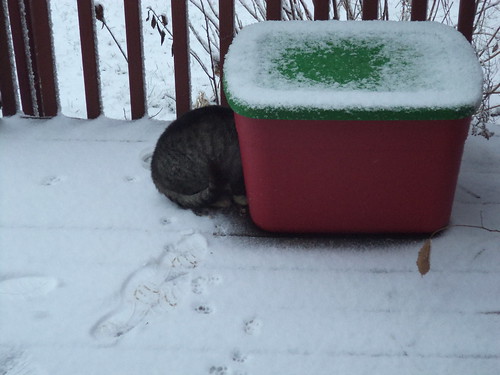 Well, at least her head is dry. She hung around for a bit after eating and then disappeared. We were to get a measurable amount of snow on Monday night. After reading about how people handled keeping the snow away from the door of the house, I came up with this simple solution. 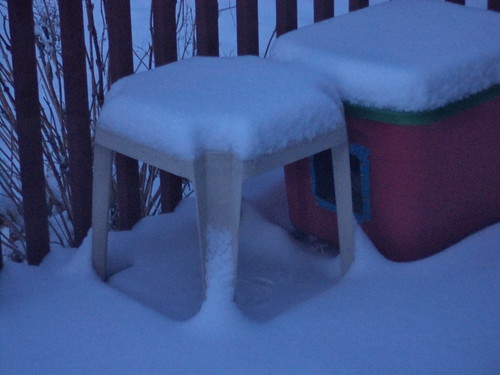 I didn't get the 7 inches predicted, for which I'm grateful, in more ways than one. It occurred to me that I have some old storm windows in the basement, I think. I could put one on top of the house, with it extending over the edge. Another one could be sandwiched between the house and the deck rails. That set up would definitely keep all but the heaviest snow away from the front AND provide something of a wind break to keep the house warmer once she gets inside. That's a task for the weekend.

There was no sign of her although there were a few foot prints in the snow. I cleared the snow away from the house and moved the table away a bit, setting down the food and water dish where it usually goes. 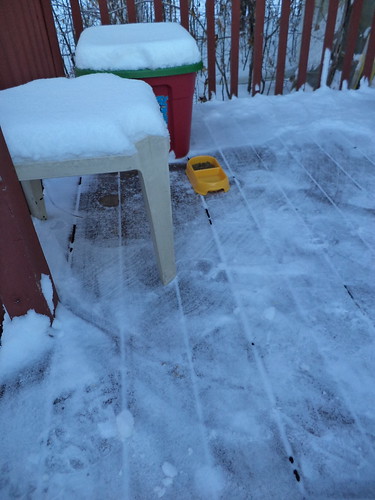 When I came home Monday night, the food had not been touched. There was no evidence she'd even been around on Monday. I put food out on Tuesday but, again, there was no evidence she'd been by. I'm trying to not worry that something is wrong. I'm trying to trust that she has a place where she's warm, dry and fed. My hope is that she really is someone's cat; someone who has the stupid, misguided idea that you put family cats outside at night, but has had an epiphany and has brought her inside. I'm going to go with that hope. I did not put food out this morning. I'll just watch and see if there's evidence she's come around.

There's a fund raiser on Sunday the 18th for a local feral cat group. It's actually close to me. I'm considering going. Making connections is always good.