Did You Have Something to Do With the Boxes on My Front Step? Maaaayyybeee.

The title is a quote from text messages sent between myself and a Canadian friend, Chris. On Wednesday morning, he asked if I happened to be home. 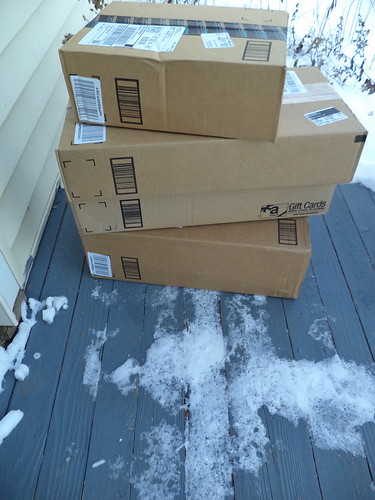 "Oh nothing. Nothing. Just looking at a UPS tracking number."

I let the conversation slide because things got busy. I didn't give the idea that he might actually be up to something until I pulled in the driveway after work and saw these boxes on the front porch. For a moment, I wracked my brain trying to think of something I had ordered, but I hadn't ordered anything other than the hard drive and I had that already. Wait Chris was tracking UPS, but that's four boxes, four! What on earth could he have done?

I brought the boxes inside and left them on the floor as I had to make a phone call. Then I tossed a load of wash in the machine and came back to the living room, hoping the girls were giving them a good sniff. It makes for the perfect photo, you know. Chris is allergic to cats so he has to live vicariously through the photos I send him. Alas, they were sitting in their respective usual spots. I had left the camera on the ottoman and they just know now. There's that flashy box. Run. I couldn't find the scissors either, which annoyed me. I have spots for things so I can find them. I need to give myself some latitude when I don't always remember to put things back where they "belong".

Upon finding the scissors (What were they doing in the bathroom?), I started opening boxes. The girls watched from afar. The small box contained M&M's. 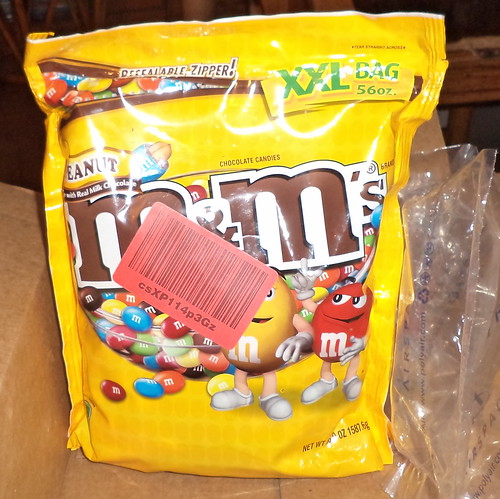 Fifty-six ounces of M&M's. Do you realize how much that is? I could hurt someone, seriously, if I hit them, on purpose, with a bag of these.

The next box was hilariously packed. This is what I saw when I opened it. 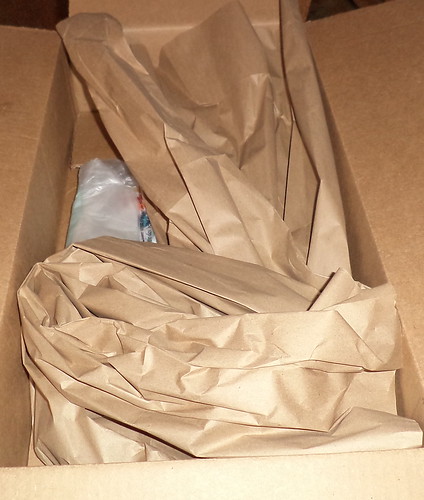 Removing the paper, I found this. 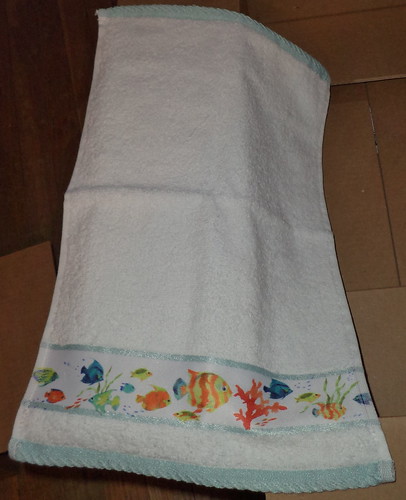 It's a wash cloth. The whole box, which was perfectly Pilchard-size, was given to shipping me a wash cloth. But I was intrigued. I really liked the design. What else was coming? 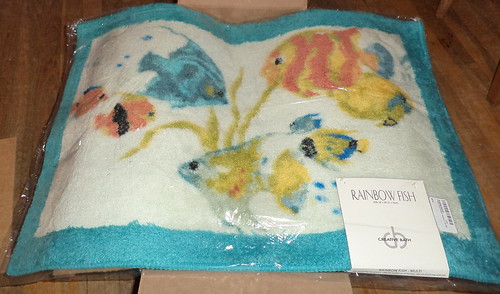 Wow. What colors! Bright and cheerful! This is slightly suspicious, though. I can use a new bath mat. How could he have known.

The last box was the largest and heaviest. 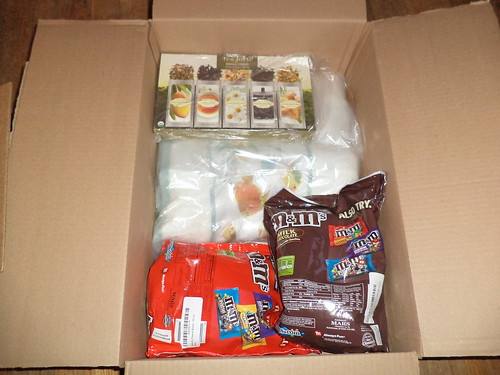 First of all, there's more tea. 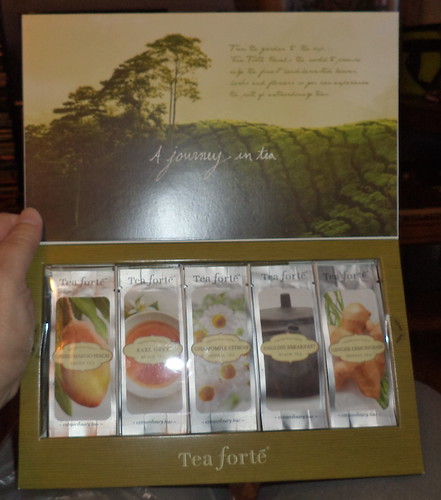 These are single use packets. I told myself, with the purchase of a 12-pack of Dr. Pepper at New Year's, that I was going to wean myself off soda. That can be really hard, when you're used to one or more a day. Well, thanks to Christmas, I don't need soda. I have more than enough tea and hot cocoa to last me until at least fall, and yes, I will drink hot cocoa when it's 85 degrees in the shade. 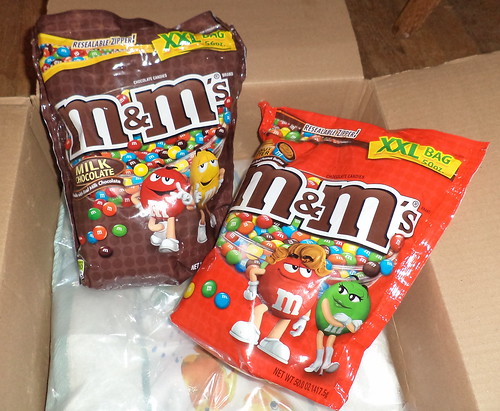 I had no idea M&M's came in such large bags. When I combine these with what I got from Meredith for Christmas, I don't need M&M's probably through my birthday this fall. The only problem is that the M&M's I really like, the ones with the cherry center, are out now. I can get them at the pharmacy when I pick up my monthly meds. Well, I can save those and enjoy them in the heat of the summer.

Finally, there was a bath towel in this fish design. 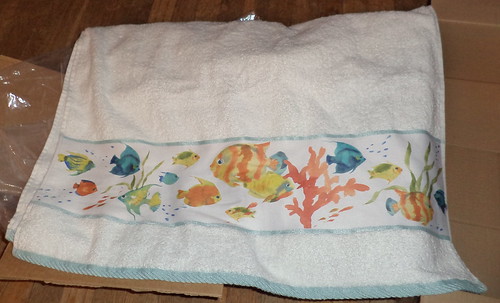 So now you're wondering how this set looks in the bathroom. This is the mat the new one replaced. 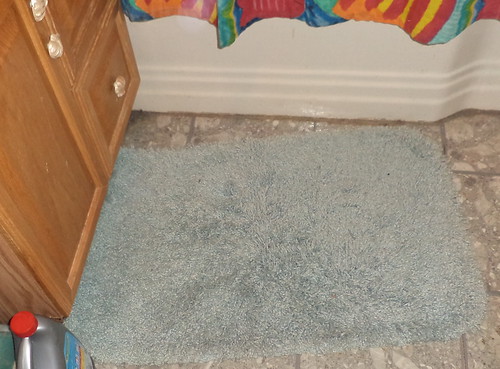 I have an undersea theme going on in the bathroom, so the mats have fish on them or are blue. This particular mat has been in use for a very long time. It has no rubber surface on the back of it. I do have a container of goop you can spread on the back of mats which have lost their backing, but it's not something you should be doing in the closed environs of your house. And I never think to do it in the summer when I could do that on the deck and let it sit. So, I just have to be careful when I get out of the tub. 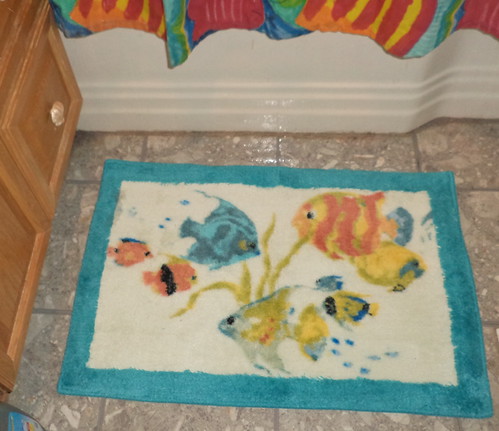 Much improved, don't you think? I'll wash the old one and stick it in a give away bag.

This is one of the three sets of towels I have which go with the shower curtain. 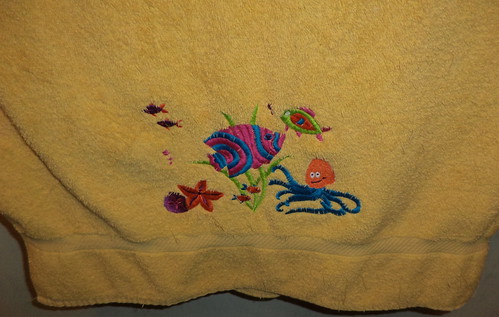 I have this design on yellow, white and blue towels. They have worn like cast iron. I have no idea where I got them or how much I paid but they have proven to be a great value. 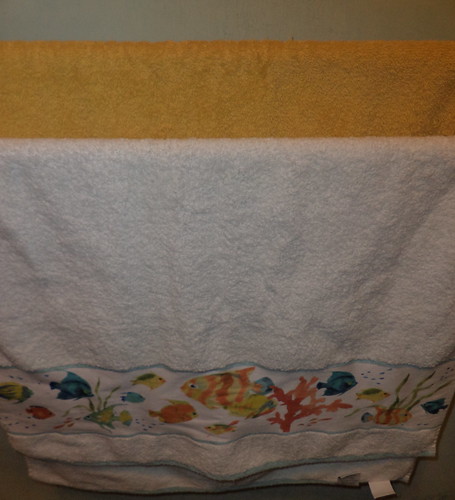 I think this will match nicely, not that I need my bathroom towels to match. I'll look through the very ancient towels that I have and pick one or two out that I can retire.

Finally, there is the wash cloth. 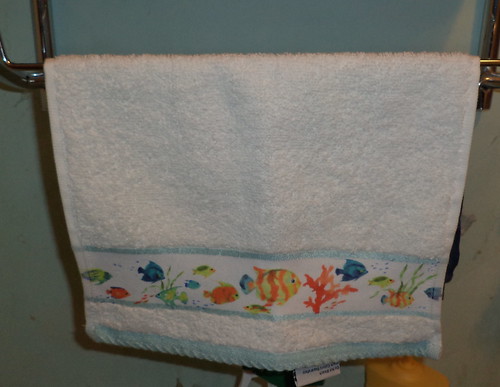 This is on the rod next to the sink. I kind of don't want to use it. It's so pretty where it hangs.

I was dumbfounded. Chris had contacted Carole and she gave him ideas for items I would like. "She's been using these bath towels and mats since kind of the dawn of time." That's only a slight exaggeration. Plus, she kept the secret. I'm sure she enjoyed knowing something that I didn't know. I'm kind of surprised she didn't tease me, but that would have, possibly, because I can be a bit dense, given away the secret. I'm thrilled. This was totally unexpected and I giggled and giggled. It made me so very happy. I have great friends who surprise me like this.

Finally, Pilchard was thrilled with the boxes. She's settled on this one as her own. 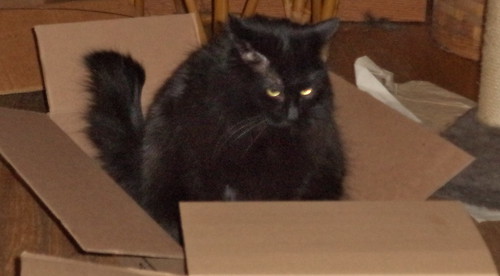 The rest went into the recycling can.