We all do this. It's kind of a default setting for New Year's. "I resolve to lose weight." "I resolve to get my financial house in order." "I resolve to give more to charity." [insert topical resolution here] You do it. I do it. And long about now, we discover whether our resolutions actually stick. Generally, they don't and you give yourself 40 mental lashes for failing. (Strike overly dramatic pose of defeat.)

When you've got a disease in which chronic fatigue is a major part, resolving to "be more active" or "lose weight" or even "get one project done at night after work" is wholly tied to whether you even have the energy to eat when you get home. Making resolutions is almost surely guaranteed to lead to self-bashing because you can't do what you've resolved to do. Even breaking a resolution, such as "exercise every day", down to simply adding 20 more steps and going in the front door instead of the back, can be fatal to keep if I am exhausted because of an RA flare. I knew I was setting myself up for failure. I know me. Calling them "resolutions" doesn't make these ideas better than any other idea I've ever cooked up. Give them a title and I'll feel that much worse when I can't keep them.

So, I'm trying something different this year. I looked over the span of last year and picked something I really want to improve on, eating better. I spent the last week of 2014 thinking about my diet. How can I improve it? Well, I could be cooking dinner when I get home. What is the reality of that? I'm often too tired to cook. That leads to skipping dinner altogether or eating something just because it's fast. I spent a week in December eating a peanut butter sandwich for dinner. That was it because I was too tired to cook. I spend way too much money on eating lunch out because I'm too tired to cook to make left overs of things that I enjoy eating. It's faster to just run over to Subway. What can I, realistically, do to eat better?

Step 1 was to go over the budget. Gad I hate this. I hate going backwards through the previous year and seeing, in black and yellow (since I was doing the tallying on a legal pad), what I already knew but had refused to acknowledge. Too much of my meager funds went into eating lunch out because I was too tired to cook. I decided that had to change. There are a lot of things I can't change in my budget, but that's one thing that could.

Step 2 was to decide what to add or take away from my diet. I decided to simplify lunch and add a fruit to every day's meals. 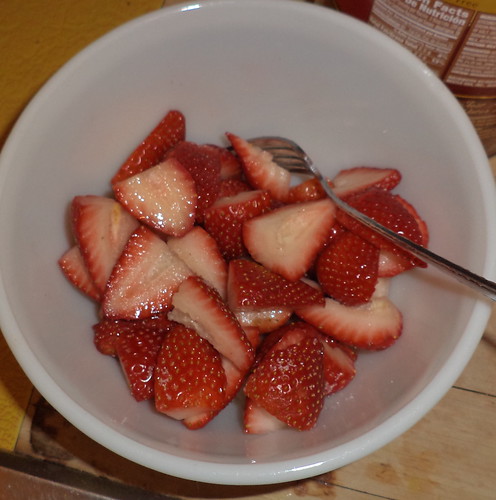 Step 3 was to divide the month in half. My company pays monthly. I realize some of you will go, "How can you live like that?" After 3-4 months, you get used to it. I, generally, buy all my groceries at the beginning of the month. The problem is that fresh fruits and vegetables don't keep for a month. You're lucky if you can keep them 2 weeks. We always joked that we don't have vegetable and fruit bins in the fridge. We have compost bins. I can, twice a month, go to the store for fresh produce and frozen dinners. I have wrapped meats and frozen veggies in the freezer. If I get ambitious and have the energy, I can make meals from scratch. But, lunches would be frozen dinners. The cost is the same, less, actually, than going out. Plus, I'm shouldn't be tossing as much moldy produce into the compost bins which equates to dollars thrown away.

Step 4. Stop calling them "resolutions" and call them "goals".

Step 5 Tic off, on the kitchen calendar, the days I don't eat lunch out and the days I add a fruit to what I eat.

How am I doing? So far, so good. Only one lunch out, so far, this month and that was because I was going to be out in the field at lunch without the opportunity to eat home prepared. Breakfast is a thornier issue as I can spring out of bed one day, full of vim and vigor and then next day sleep completely through the alarm and wake up with an hour to dress, feed the cats, eat breakfast and get to the office. I'm giving myself permission to not worry about breakfast so long as I eat it. No skipping. I am making a Dunkin' run only once per week and Panera every other week, circling the dates I visit each on the calendar so I am not tempted to go more than I can.

I'm told it takes a month of work to make something a habit or to change a behavior. This is all I'm doing right now, trying to change eating habits. I've tried some new to me frozen dinners, things I probably wouldn't have tried had I not set the goal of reducing money outlays for lunch. Some are clear winners. Some are, "Well, not eating that ever again." Today, I have the last banana and the last yogurt in addition to a shrimp alfredo that looked good on the box. Monday will be a new fruit, maybe apples, and there are still a week's worth of frozen dinners behind the bread.

I'll revisit this on February 1st and see how I've done.