A Case of the Thaws

It's been lovely the last two days. 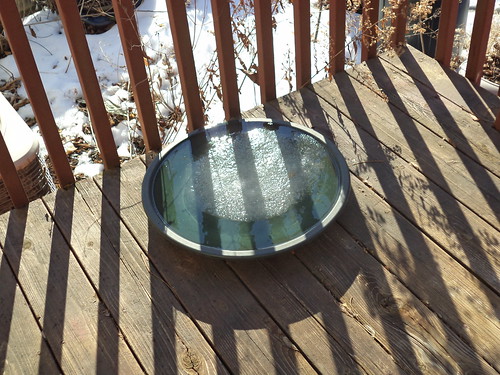 There's been a whole lotta melting going on. Almost all the ice in the birdbath is gone. There's usually a January thaw and we've had it.

Given that last year, at this time, we had received close to 2 feet of snow, I enjoyed the nice weather. Mija and I went out on the deck for a few minutes, rather, she followed me out while I took out the garbage and the recycling. Our deck visitor hasn't been seen in over a week. There is no sign that she's been anywhere near the house. I'm trusting that she's got a family who loves her. The house will stay on the deck until mid-spring, just in case.

I've started new RA meds. The Enbrel, started before Thanksgiving, just didn't seem to work. I've been given samples of Humira to try. This is an every other week shot. I can't say that there was an immediate change to my life. When the weather is bright and sunny and cheerful and mild, I don't notice that I have aches and pains. My biggest complaint is the chronic fatigue, not swelling of or pain in my joints. I'm supposed to get some relief, some energy back.

Sitting on the top deck stair in the warmth of a mid-January sun made my RA seem a million miles away. I'll take it. I still don't get as much done as I'd like, I wear out too quickly, but mild January days make that aspect much easier to bear.