There Was a Wedding - Part 9 - Cleaning Up and Going Home

On Sunday, there was a luncheon hosted by Carole and Larry for their attendants and family. I have a guild member who lives in Roanoke. He can't travel the distance to the guild meet ups owing to a very bad back, so Doo and I decided we were going to Roanoke to meet him. It was a wonderful day to make a 3 hour, one way, drive. Mom was picked up at the house, by Larry and Donna and they dropped off all the gifts before heading to the luncheon. Mom said the meal at the restaurant was fantastic. The kids brought her back to the house so she could sit in the sofa and watch her NASCAR race. Plus, she could have 'bonding' time with her great-grand kitties. 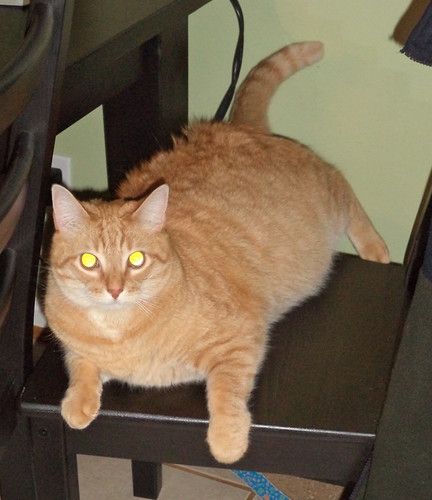 Tobey, while exceedingly mellow, is Carole's cat, 100%. He allowed us to pet him, but he wouldn't get that close. He doesn't like to be picked up, even by Carole, but he sits next to her wherever she happens to me. Sunday evening was a case in point. 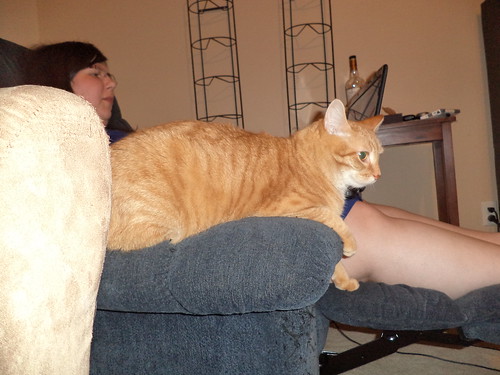 Faux is Faux. He liked to be in the hallway. 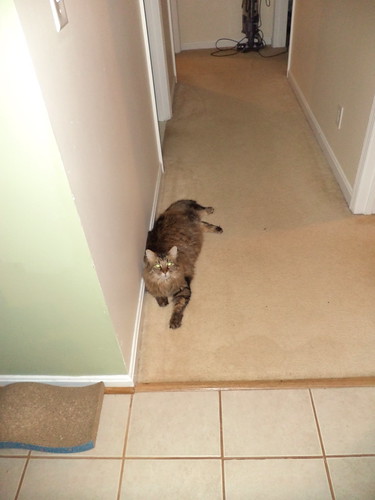 He knows he won't get stepped on, that you'll step around him. This was his supervisor position for all the activity in the house. 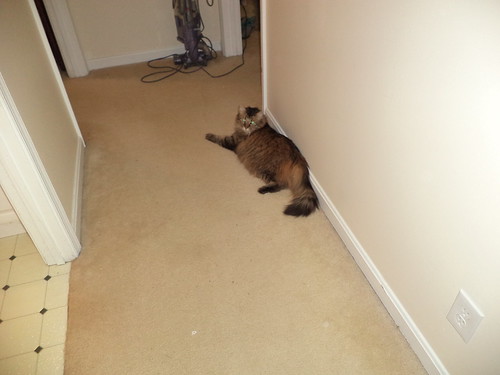 He tolerates, up to a point, being petted, but he's become Larry's cat. When Larry comes home from work, Faux runs to him. Larry scoops him up and flips him over and they would wander about the house. The two boys have twice as much space now to explore but I'm told they are enjoying having all sorts of places to go.

When I got back from Roanoke, the kids were opening gifts. Mom and I enjoyed seeing all the wonderful items. We had leftover cake. 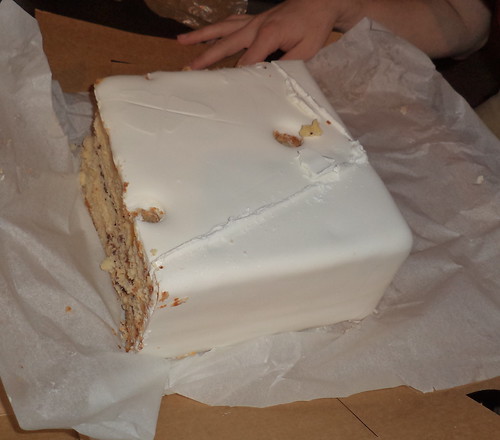 This was the bottom layer and was the Boston Cream Pie layer. We took our cake pieces and watched Iowa lose, badly, to Gonzaga in the NCAA men's basketball tournament while Carole wrote out 'Thank you' notes for wedding gifts. Larry signed and addressed them. Mom and I had to laugh when we received our notes 10 days after we'd returned home. Carole was waiting for the new address labels before mailing them out. That was good because I needed to update my address book.

When that game was over, we watched University of Northern Iowa's game before flipping to Wisconsin-Oregon. This is one of Faux's favorite places to be. 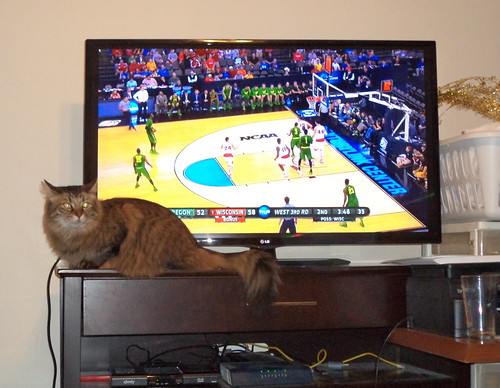 He won't be able to do this in the new house as the TV is going in the basement media room and will be hung on the wall. We didn't finish watching the game as we were all tired and everyone had places to be in the morning.

6 a.m. is early, regardless of which time zone you're in. Mom and I got up, had breakfast, finished packing the car and left. This was the last time to see the house Larry had purchased a couple years before meeting Carole. 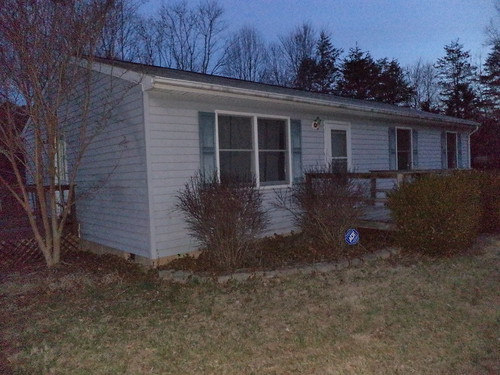 The next time I visit, I will be learning a new place to travel to.

Sunrise is pretty regardless of where you are, like in Warrenton, Virginia. 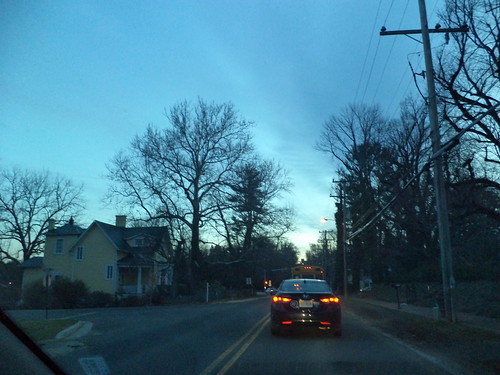 We headed west into a beautiful day. 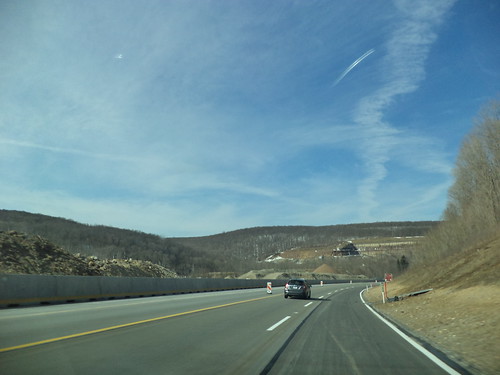 There was still snow in the mountain ridges and the temperature was cooler than the weekend. It wasn't until we got into western Ohio that the weather took a noticeable turn. 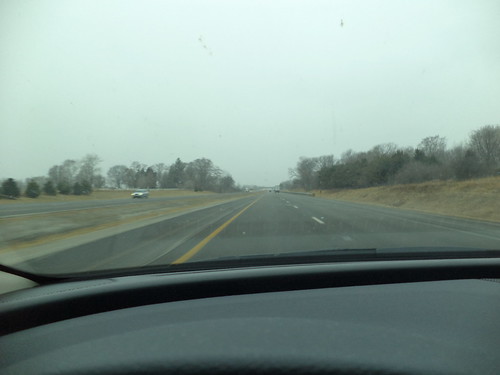 The clouds got really think. It seemed like we were driving into snow. Wait, it had just been 70. Snow? As we passed into Indiana, it was clear. This was snow. 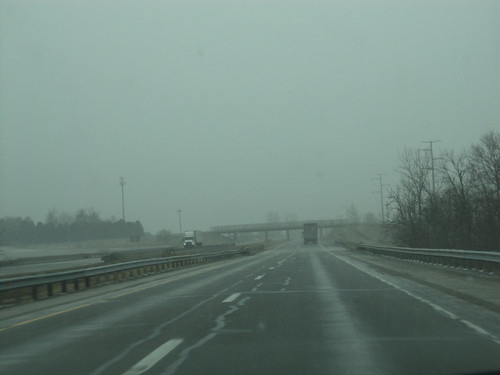 Mom and I looked at each other when I stopped for gas, to make sure we made it back to the house without having to stop in a snowstorm. Snow? Oh yeah, the closer we got to Chicago, the heavier and wetter the snow became. 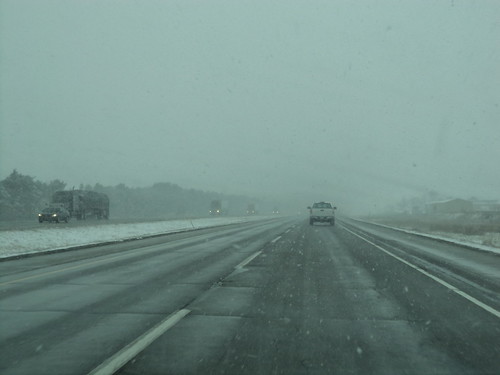 You can see that the Interstate is wet, but it was never slippery. It was also never not clear so we made decent time as we drove into and out of the snow bands. In Indiana, we passed a UPS truck that had been towing 3 trailers. He had lost control and flipped one trailer over the shoulder guard rail and onto its side. People were emptying that trailer into a larger one. The middle trailer of the three, was standing upright although its hitches were mangled and the first trailer was still attached to the cab. Traffic was slowed to a crawl for several miles before passing the wreck. Otherwise, there was nothing awry, other than snow, to keep us from making time to get to my house. 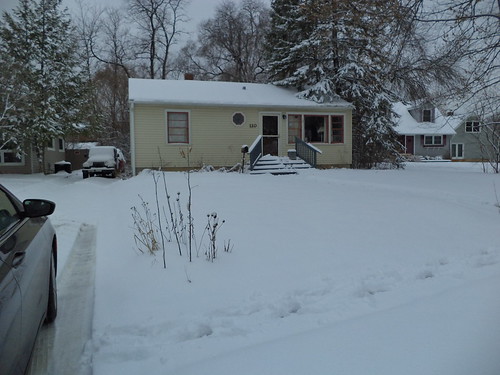 Whose crazy idea was this? 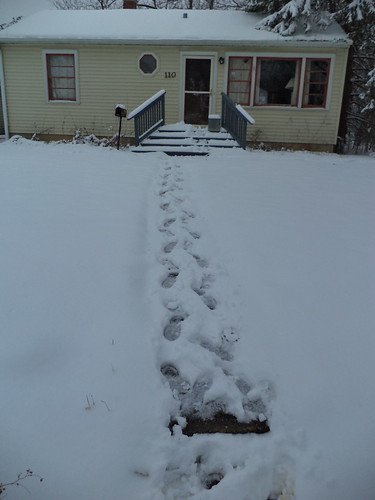 It was six inches of sloppy snow. It was still 70 degrees in Virginia. Mom and I shoveled the front steps and walk and unpacked the car. We went to bed early that night.

In the morning, we had a lovely brunch at a local Wheaton restaurant. 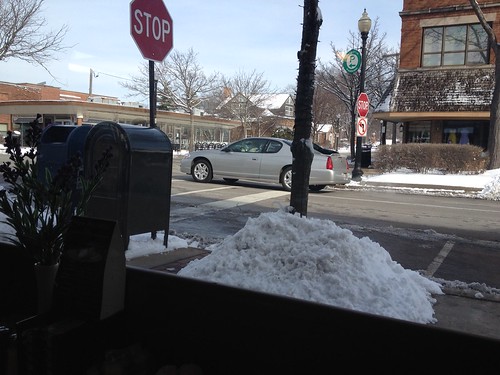 The melting had started but there were heaps of snow everywhere. After brunch, mom packed up her car and headed back to Iowa. 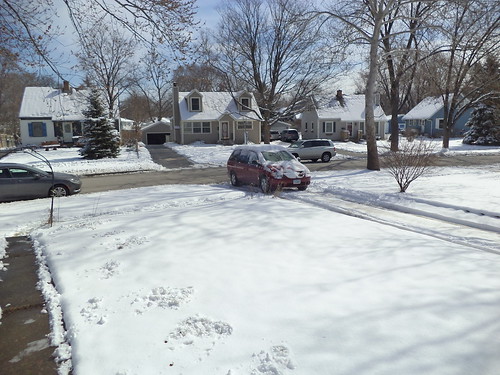 By the time she left, all the roads were clear and it was sunshine all the way home for her. I returned the rental and started the process of doing wash, dealing with mail and loving up two cats who were very happy to see me. We haven't had a measurable snow since this date.

We packed a lot into 6 days, from travel to and from to buying a house to food and friends. It was a wonderful, wonderful wedding. It went off without a major hitch. Carole and Larry got exactly what they deserved, a perfect day on which to build a forever life together. 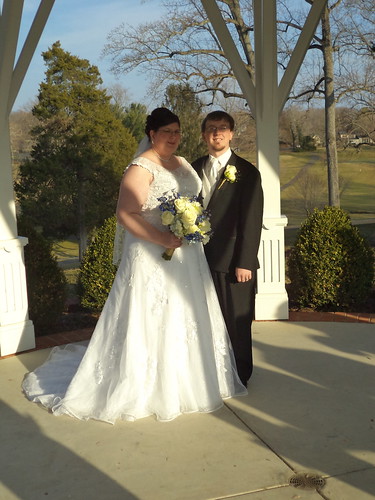