I've been traveling again. This is getting quite old, but the past weekend was to attend my mother's 80th birthday party. The weather was nice for driving and I got to see cousins I hadn't seen in years.

There would be down time so what to do during that time. I debated taking my next read or one of the two magazines I have on the ottoman. After thinking it over, I decided the cross-stitch project was the best choice.

I arrived in the middle of the afternoon on Friday. After making cheesecake, I sat down to stitch. We had supper and then went to visit my niece, who had given birth earlier in the day. Upon returning home, I watched the PBS series, "Great Performance" because it was Annie Lennox singing songs from her "Nostalgia" album. That reminds me that I need to review this album. I stitched while watching that and for an hour afterwards. This was how the design looked on Saturday morning. 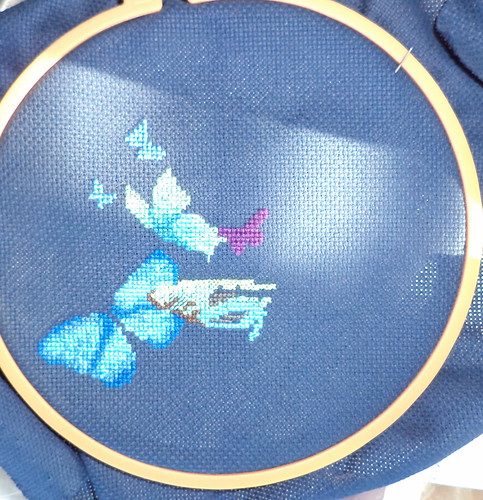 Saturday was the party/open house for family. There wasn't much stitching in the morning. I did a lot once we came home from clean up. Listening to the NCAA men's basketball semi-finals is a great way to get quite a bit done. Here's what I accomplished on Saturday night. 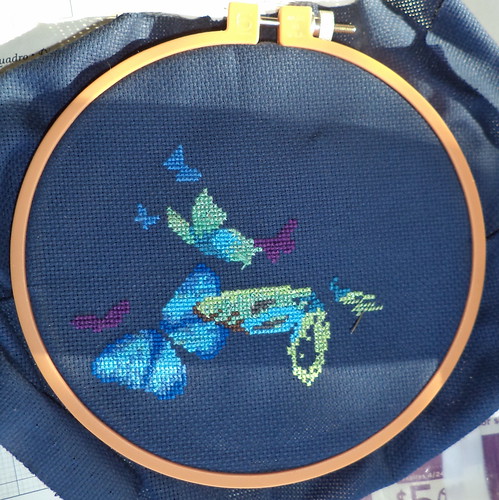 This is a bit more complicated than the first project of the year. There is a blending filament which is used with some of the floss colors. I'm not a fan of this because these filaments can be tough to keep unknotted. Plus, they tend to fray because they aren't exactly thread, like floss is. But, they do add a sparkle to the design, which you can't see, even though the yellow green color has blending filament in it.

As spring progresses, what could be more fun than cross stitching butterflies?