Back in 2012, I started the process to use up the cologne I have accumulated over the years. First was the small cologne saturated squares Avon used to give out. Next came the small one inch glass tubes with cologne in them. I'm now up to the small jars of cologne. I lined them all up; there were 10 small bottles; and started with the fragrance at the left end. It was a bottle of 5th Avenue. I have no idea where I got it. I wore that, pretty much exclusively, when I wore cologne. This started in July of 2013 and I just finished it last week. Admittedly, I don't wear cologne every day, but that still is a long time.

In that time the "line" on the dresser had been smushed together so I formed it up again and Clinique's "Happy" came up next. 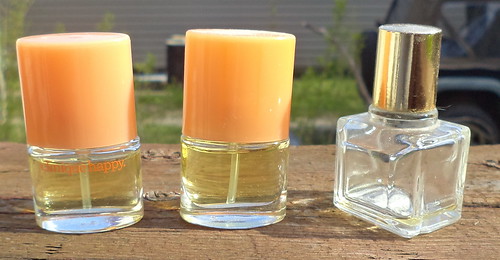 I had 3 small spray bottle samples of it. I figured I'd just lump all three bottle together and wear this until I was out of it. The sprayer on the first bottle would not work so I dumped it into a give away bag. They can deal with it. I grabbed the next bottle. I didn't like the smell. I thought perhaps it was the fact that I was so used to 5th Avenue that the change was startling. I would give Happy a week to grow on me.

Nope. I couldn't do it. I really didn't like the smell. It's too spicy for me. It did not make me happy. So, I dumped these two bottles in the give away bag and grabbed the next one in line. 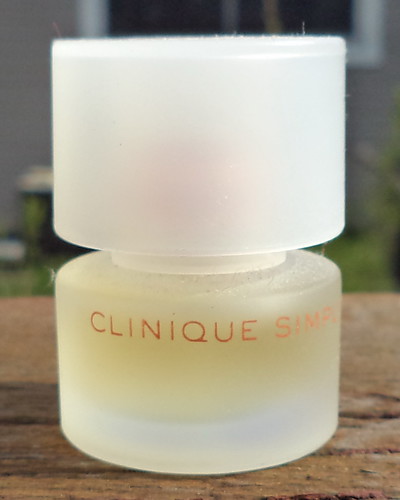 I like this one much better. Ironically, checking the Clinique web site, they don't make it anymore. When I mentioned this to a friend, she said there is a lot of money to be made in discontinued fragrances. I should put this on eBay. I admit to thinking about it and, if a reader of this blog makes me a decent offer, I would sell it to you. But I don't have time to do a whole eBay selling research and learn session. So, it's just going to get worn.

I like the bottle design. Some fragrances spent as much to create a work of art for the bottle as they did for the contents. Given the two fragrances at the top, this bottle is very distinctive.

After this is gone, I have some very retro fragrances, Charlie and Jessica McClintock. Charlie has seen a resurgence of interest and you can buy it at CVS. I was rather surprised to see it when I walked through the fragrance aisle on my way to the pharmacy. "Oh wow! I wore that." My grandfather gave me a set one year for my birthday that contained a big and a little bottle. I still have the little bottle.

I got the Jessica McClintock in a bag of freebies from Carson Pirie Scott. I remember it with much fondness. It is a fragrance that I always meant to get a bigger bottle of because I liked it so well, but which I never did. So, I squirreled away the small sample bottle and here it is on top of the dresser. It used to be a very exclusive scent, sold only in "finer department stores". You can get it now at Walgreens. Nothing's rare about these two scents. I don't remember what comes after these two.

It's going to be interesting to see how quickly these are used up. I don't wear cologne on the weekend unless I'm going out. I don't wear cologne during the spring, summer and fall, if I'm out on a job site. I've had enough bees try to find the source of the floral smell that it's not worth it. I wonder if spray bottles are consumed faster than a bottle where you have to apply using your finger. I'll just be going by how long it takes to use them up.