There Was a Wedding - Part 2 - Rehearsal and What Are You Doing?

When the kids were here in December for Christmas, Carole mentioned they were going to start the often arduous process of buying a new home. They reasoned that if they got started after the first of the year, it would be a drawn out process and they could find a home just right for them by late spring, after all the wedding and honeymoon stuff was over. "It would be nice to have it happen earlier, but I don't see that," she said. We'll just file this under "be careful what you wish for".

After looking through over 100 listings, in early February, they thought they had found "the" home. They dashed over to see it. It was perfect. They put in an offer, only to find out they were 2nd. This started week after week of out to look, offer, rejected offer. As the date for the wedding crept closer, Carole was feeling more and more stressed about the process.

But at the end of February, they looked at a house which had been on the market for 4 months. The floor plan was similar to ones they had looked at before and was in the same subdivision as other homes they had seen and made offers on. They walked through it and knew, just knew, this was their home.

There were issues, as there invariably are. The house didn't have a radon remediation system and that's a slightly pricy thing which was required, based on radon tests. There was an issue with the electrical in the downstairs bathroom and there was no hot water in the upstairs guest bathroom. There were back and forth negotiations. It seemed the current owners weren't going to budge so the kids went looking again, but nothing seemed to be what they wanted.

Add to this, needing to put Larry's house on the market. Their realtor said she could sell Larry's house within a week. Carole said, "I thought, 'Yeah, you're just saying that to get our business.'" There was a snowstorm in early March which dumped a foot of snow on Virginia, the day after the house went on the market. Larry didn't go to work and Carole opted to work from home. Larry had just shoveled the drive when there came a knock on the front door. It was a realtor with a prospective buyer. They had driven by, in that lousy weather, and decided to look at the home. Three days later, that person made them an offer at their asking price.

Meanwhile, the appraisal of the other home came in and it was less than what Carole and Larry offered. The bank said they would not grant a loan for more than the appraisal. When presented with this information, the owners realized that the kids were serious about buying the place and the owners lowered the price and installed the radon remediation system. The house was now Carole and Larry's. (The electrical issue was a simple replacing of the outlet in the bathroom and the reason the upstairs bathroom didn't have any hot water was because they turned on all the water spigots to test for water pressure and drained all the hot water in the tank.)

So, a flurry of paperwork ensued and, on Friday, the day before the wedding, we drove to Alexandria, Virginia where Larry's cousin owns a title company. The kids bought a house. They signed the papers  to sell Larry's house on March 31st, after moving completely into the new house the weekend before. 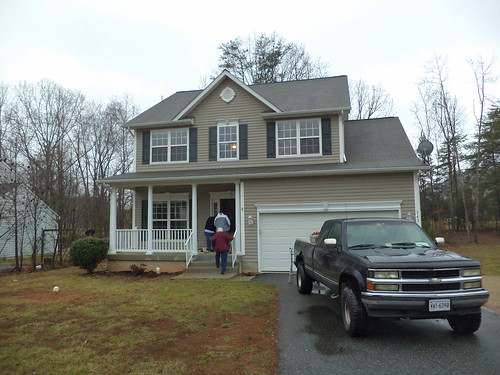 This wasn't really in the plans for the weekend. When they started looking, Carole and I joked about going out to look at homes on Friday, not to walk through the house they had just purchased. But it made perfect sense, in the grand karma of the way their lives have gone. They were starting a new life on Saturday; marrying their best friend. It was going to be a most wonderful wedding in every way. And now, they had a house, a home, where they will spend probably decades of happiness. The truck belongs to the painters they hired to paint the interior.

Although the addition of signing paperwork to buy a house and then the drive to the house, which is 3 hours south of Alexandria, added to the stress of the day, the fact that my mom was there and could see the house made the driving worth it. She was thrilled.

The day here is overcast. Remember the nice weather of driving to Virginia? Well, um, yeah. That disappeared. 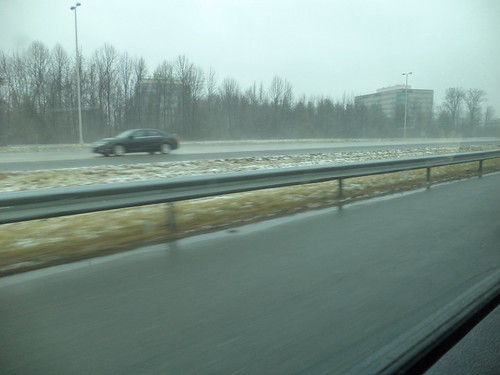 This was on the way to Alexandria. That stuff in the middle of the Interstate is snow. Yup, it snowed the day before the wedding. By the time we got to Alexandria, it had changed to sloppy snow-infused rain. No one said anything but we were all thinking it, "What a downer from yesterday. This better not stick around for Saturday."

After we got a tour of the new house, we dashed back to the old house, freshened up and drove the 2 miles down the road to the country club where the wedding was going to be held. The car was loaded with material for decorations which were dropped off at the office. We walked into the main room of the country club to see there was a Mardi Gras-themed event happening that evening. Still, we were able to rehearse. 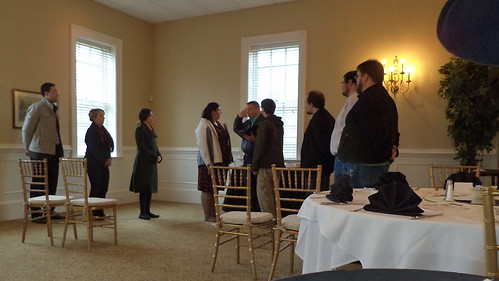 We made sure to put anything back that we moved even though staff directed us where to sit while we watched. Again, no one really spoke about how cold and chilled we all were, how bad the weather had been on that day. Really, however, it was March and we all know it's fraught with rain, cold and snow, even in Virginia.

From here, we went to Murphy's in Warrenton for the rehearsal dinner. I didn't take any photos there, something I should have. Murphy's is a grand Irish pub and the food is really good. I had a shepherd's pie that was outstanding. After a good meal, we went back to Carole and Larry's and watched the Hawkeyes destroy their first round opponent in the NCAA men's basketball tournament. Next up. wedding day preparations, or "I haven't done THAT in years".