This year, for the first time in roughly 8 years, I have to handle my own lawn mowing. My neighbor, Zeke, has retired and as soon as his house sells, he and his wife are moving. I contacted a few lawn services, but they never returned my call. Therefore, I decided I would mow my own lawn. This is a huge decision because it means I'm feeling reasonably decent enough to take that kind of step. It won't take a long time to mow and it's good exercise. Lord knows I need that.

So the first step was to research lawn mowers. Several people pointed out I need self-propelled. If I have to do the physical work of pushing, I will overdo it which leads to an RA flare up. I'm trying to avoid that. Next, I needed big rear wheels to facilitate moving the mower over rough terrain or through taller than usual grass. I also needed it not to cost an arm, leg and spleen.

As if the universe was looking out for me, Ace Hardware had a mower on sale over the weekend. I checked it out and decided it was the right mower for me. They had one on the floor that I could have and they put it in the Jeep for me.

The next step was to clean out the shed. Since I don't have a garage, the mower has to fit in the shed. But in order to get it in there, I had to clean it out. 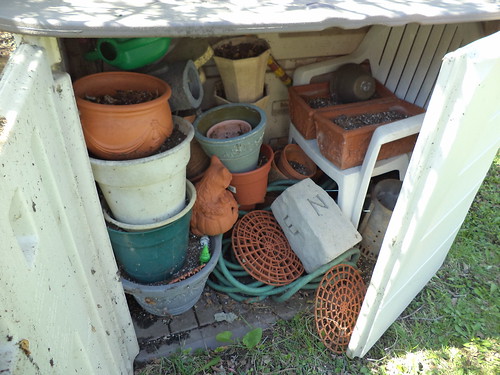 This has long been on my "to do" list. I have so many flower pots. It's not organized. I can't find the things I actually use. Needing to buy a lawn mower fit right in with the tidying I'm doing gradually around the house. On Sunday, when the clouds cleared and the sun came out, I jumped into cleaning the shed. I would make a pile of 'save' and a pile of 'pitch'.

Two years ago, when I was getting pots out for planting, I saw a mouse. I never saw any last year, but there was the unmistakable odor of mouse urine in the shed. Donning gloves, I slowly started pulling pots out, hoping not to see anything gray scurry away. I didn't, but I found the source of the smell. 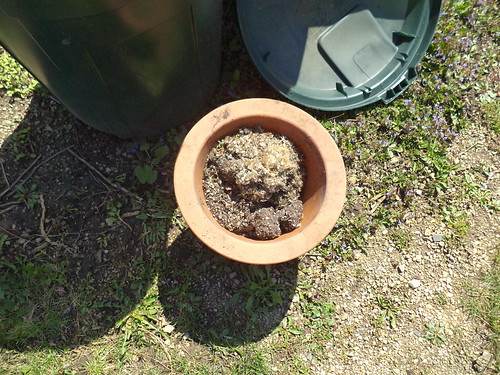 They had made a nest in this pot. I actually like this pot. It's heavy-duty plastic. So, I'm going to dump everything in the pot into a garbage bag, rinse out the pot and I should be able to use it. There were no other pots with mice nests in them.

I found this guy on the floor of the shed. 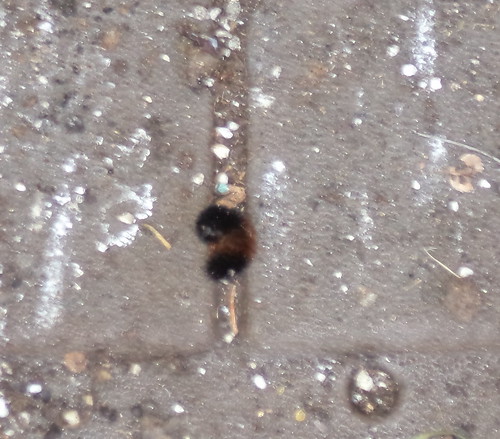 I wonder how long he's been in the shed.

After some work, everything had been removed and I saw the floor was covered in potting soil. 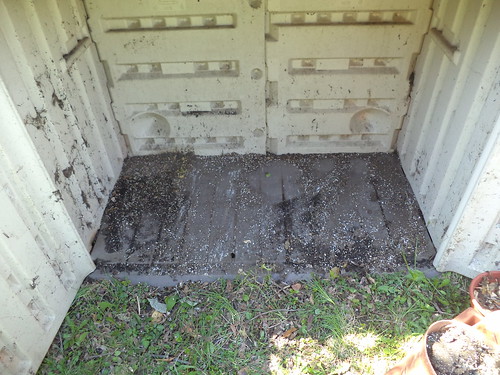 What a mess. I really can't tell you how old this shed is. I'm thinking I got it in 2000 or 2001. Carole and I assembled it ourselves. I'm fairly certain the dirt on the floor of the shed hasn't been there all that time, but I do know I haven't bothered to clear out old dirt when it spilled. So, I took the broom and swept it out. 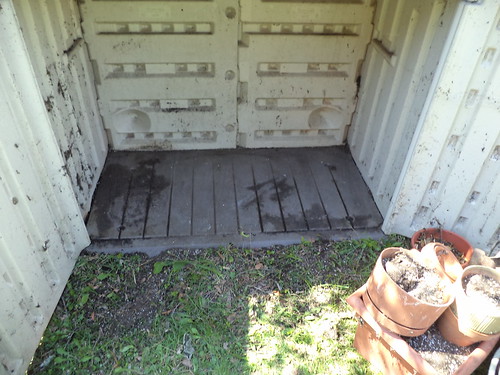 Now it was time to get the mower out of the Jeep. The guy at Ace said he thought the mower weighed about 50 pounds. That seemed kind of heavy to me, but if the salesman could get it into the Jeep, I could get it out. 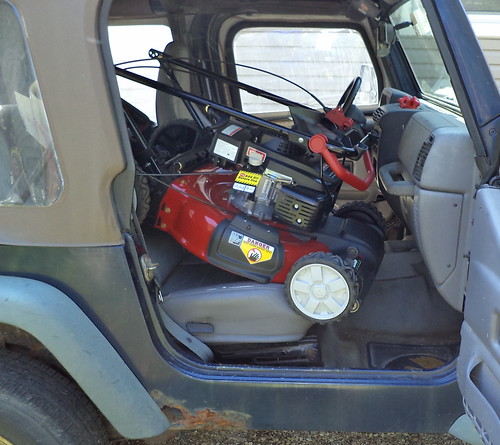 Turns out, it's not 50 pounds. It's more like 30 so it was easy for me to maneuver sideways and lower to the ground. That alone made me feel really good.

I rolled it over to the shed. From a distance, it appeared the mower was 2-3 inches too wide. What would I do then? I shouldn't have worried. 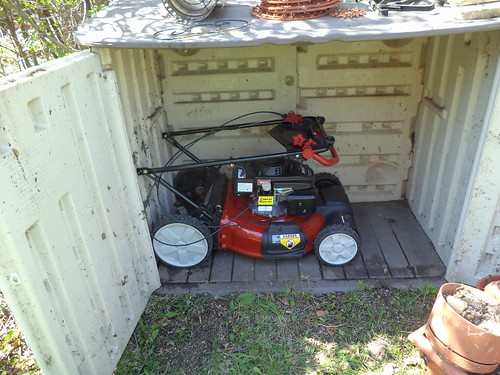 It fits perfectly. The handle folds down. It comes with a rear bag but I won't ever use that. The manipulation of the bag is not something I really want to do. It comes with a side discharge and I'm very happy with that. 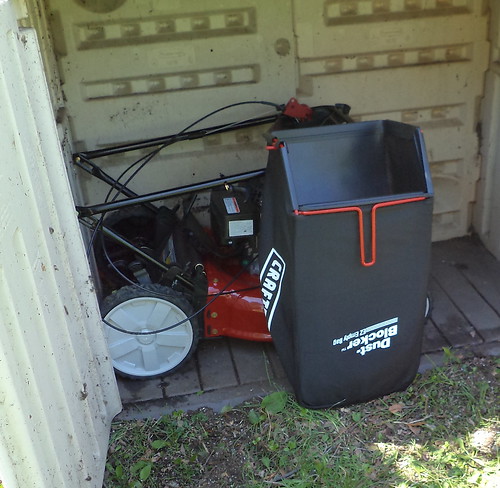 The bag will go into the basement for storage. They filled the tank with the gas oil mixture I need and gave me the bottle of oil so I can make sure to buy the same kind for the next fill-up. I need to read the owner's manual this week.

Once this was done, it was time to finish sorting my flower pots and other stuff in the shed.

I don't have a grill so I have no need of the charcoal starter. There is a small wire piece that's off the front arbor. I keep meaning to super glue it back on. The brown things are pot trivets. They keep flower pots off the deck proper and allow air to circulate under the pots. Half of these were used continually. I thought I had more, but could never find them. Funny how things show up when you're cleaning. The brackets are for the deck pots and the yellow sponge things are kneelers. I probably could give those away as I don't kneel while gardening anymore. But I hung onto them, figuring that I probably will need them when I stain the deck next month. All this stuff stays although I would be happy to sell the charcoal starter since I don't use it. 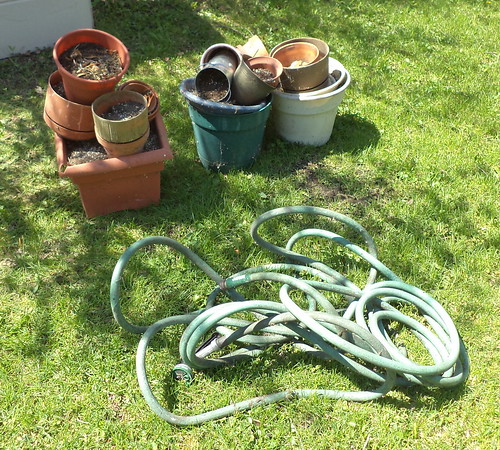 All of this is going. This year, instead of going to the nursery and buying plants, I ordered plants from a catalogue. The company sells heirloom flowers and vegetables and I thought I would give some of their plants a try. Some of these pots are cracked and broken. I just don't use most of them. A lot of the plastic ones I can probably recycle. I'm going to dump out all the dirt and get rid of these. Yes, the hose is going too. It's cracked on one end so it won't hook up to the outside spigot. It's also about twice as long as I realistically can use. I'll drag it to the street on Wednesday and see if one of the scavengers who drives around on garbage day takes it. Otherwise, it will go into the garbage can.

This is what's left. 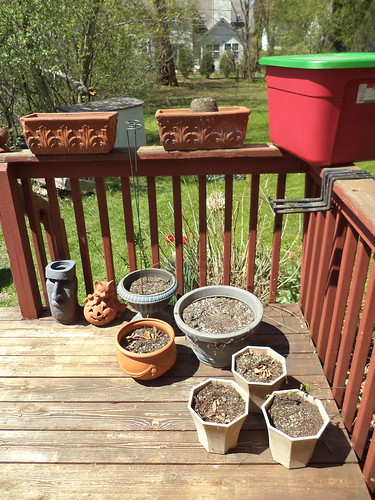 I have my art pieces, which includes the plinth with the cardinal directions. The three at the bottom are the ones I put on the front porch. I have the two that hang off the deck and 4 bigger pots, including the one that needs to be scrubbed. I also have all my geraniums which I overwinter. There is also one large pot at the base of the deck. I think this is plenty. I'll go to the nursery next month and get begonias for the front. Impatiens did not do well on the front last year. They were eaten to stalks by some bug. The begonias filled out the pots very nicely. I anticipate delivery of the plants soon and then, if I need another pot, I have it before getting rid of the others. The cat house will be emptied of bedding and put in the basement. I hope I don't have to use it again this year.

I noticed my Easter Island head is cracked. 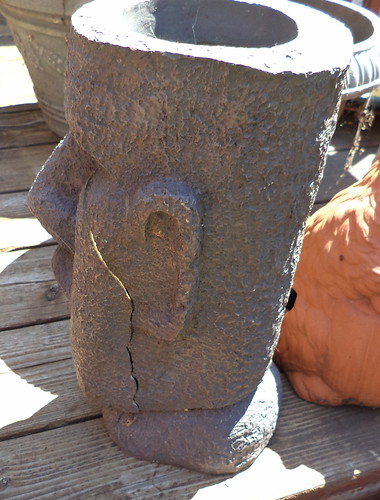 I'm unsure if I should try to fill this crack with something. There is no drainage hole in the bottom so water and debris accumulate over the course of a summer. You plop a gazing globe in the head but I've just left him as he is. He looks kind of funny with a translucent blue globe in his head.

There are two of these in the shed. These are citronella torches. I have a bunch in the basement in various stages of use. All of them are cracked, horizontally, between some of the rings.

You jammed these in the ground and sat "near" them and they warded off mosquitos. We would put them around the perimeter of the deck or in a circle and then we'd sit inside the circle. I think the optimum distance between each was 6 feet. That was more than enough room to get through the circle of torches if you needed to go inside.

I don't remember how well they worked. They looked cool when lit, like typical torches, and burned fairly slowly. The hard part was getting them into the ground, particularly if the ground was hard. I should see if the shortest of these two will still burn. If it does, then perhaps I should take these to Virginia for the next guild meet up. We like to sit outside, even in screened porches, so warding off bugs would be a good thing. If it doesn't light up and stay lit, there's the garbage can and I won't feel guilty about chucking them. They've been in the basement for years. It's time to use them or pitch them.

Finally, I was moving stuff about and suddenly had a feeling I was being watched. It took me a bit to spot her. 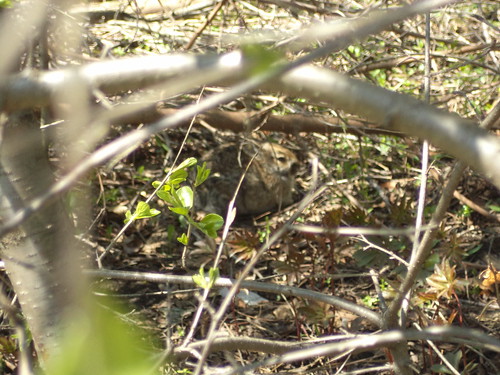 She never moved, even when I spotted her. Could this be a nest? I thought they liked more cover than this, not that she's in real danger in my yard. She was there yesterday when I got home from work. Part of me wonders, because she hasn't moved, could she be sick? Oh that would be lovely, in a not so great way. I'll keep an eye on her.

After asking about, my cousin is going to take all of the pots I want to give away. The cracked ones I won't send her, but I'm happy to be rid of everything else. "Don't spend a lot to ship them," she said. It is worth it to me to spend $20 to get them off my hands. Now to set about emptying all the dirt.