My friend, Chris, mentioned in passing that he still had some money left on an Amazon gift card he was given at Christmas. He lives in Canada and his employer gives everyone an Amazon gift card at Christmas. It's usually from Amazon Canada but last year, someone goofed and got them from Amazon US. Well you could order from the US, but the duty taxes to import stuff are pretty steep. So, Chris got me the bathroom set and all the M&Ms back in January. The little bit he had left was mine if I wanted it because he had nothing else to spend it on.

I always wrestle with that kind of offer. I never, ever want to appear greedy. Does accepting something like that make me look greedy? After thinking it over, however, I sent him a list of things which I would like if he really wanted to spend the money. I didn't want to know if he did or if he found something else to do with it. I would be surprised if something came. 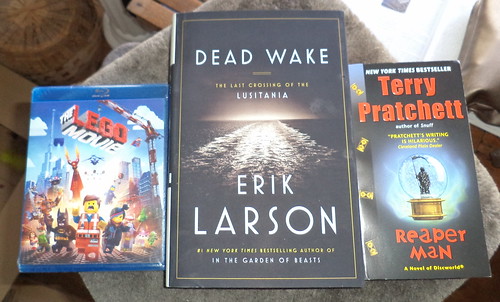 I have my late spring and early summer reading taken care of. Larson's book is brand new, coming out in March. And I haven't read that Pratchett book. I found out there are 40 books in the Discworld saga. I'm pretty sure I haven't read even half of them. (I still can't find my copies of Going Postal and Hogfather. It's driving me nuts as I want to reread Going Postal.) It's supposed to be a wonderfully warm weekend so I probably won't get to watching the movie, but I'm really excited to watch it.

So, I'm thrilled to be the recipient of Chris' company's error. I need to get the deck stained and sealed and the flowers planted and I'm good for this year's summer relaxing. Ah the simple joy of falling into a book.