Yesterday was "Tabletop Game Day". You can be forgiven for not knowing about this. I didn't until a number of Facebook friends announced it. I'm not sure who decided it would be April 11th, either. It's a day designed to highlight the games we play on our dining room table. This is the stash in my closet. 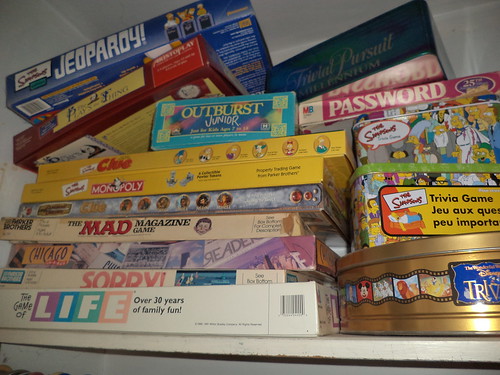 I have more on top of the wardrobe. I've mentioned how my mother loved to play games when we were growing up. "Life", "Sorry", "Monopoly", "Candyland", "Chutes and Ladders", "Scrabble" and I think even "Clue" were games I grew up on. It was natural that, as Carole grew into game playing age, we'd get games and spread that love to her.

As she grew, what was a small market, exploded. I think "Trivial Pursuit" is what started it. Companies saw there was money to be made from designing interesting, intriguing and engaging games played not on a computer, but on your kitchen table, where the cat can interrupt play just by hopping up onto the board, and snacks and soda are the evening meal. Games are released with astounding frequency and, if you type "games" into Kickstarter or indiegogo or any crowd-funding site, the list of who has a game idea they want to make is very long. Some stuff isn't worth your time, but some games are very intriguing.

When mom and I went to Carole and Larry's wedding, once we unloaded the car and got settled, we grabbed some chili and sat down to play games. First up was "Scattergories". 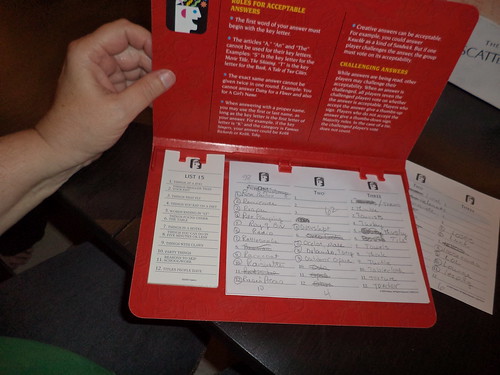 If you've never played it, it's a word association game based on a dice roll. You have to think of a word or name that goes with the category on the left. All these words have to begin with the same letter. Both the card and the letter chosen are based on rolls of dice. Some letters were easy to find words, like "R". But some, like "O", were hard. You get points based on uniqueness of your word. If someone else has the same thing, you don't get a point. Carole's really good at this.

Then, we played the newest version of Trivial Pursuit. 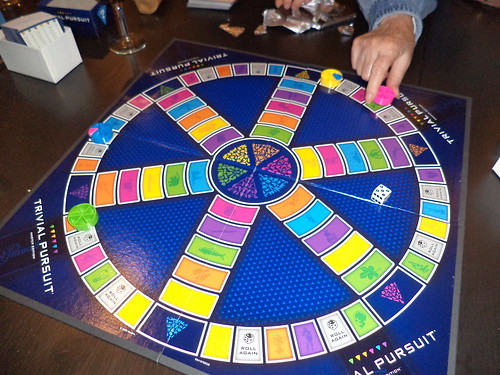 What I really wished, yesterday, was that I had a group of people with whom to play these games. I love to play World of Warcraft, but it's a solitary pursuit, even with the emphasis on groups. I sit at home, alone, and log on with others who are at their homes, alone, playing. As much as we work together to accomplish goals, we aren't trying to figure out if Jon has Colonel Mustard or if that card killed Mr. Body. Does that laugh mean he doesn't have Colonel Mustard but has the wrench? When I could stop and see April and Perry on my travels east, it was as important to time the travel to be there for their game night. I played so many games I never would have experienced by doing that.

Game nights are as much about camaraderie as they are about knowing the star of "Flashdance". And don't forget, tabletop gaming extends to marathon sessions of "Go Fish" with a bunch of giggling great nieces and nephews as it is about "Settlers of Cataan" with wine, cheese and crackers and friends.

That's what I miss.