Why is it that when you get a positive response from customer service, you are surprised, really surprised? And it's particularly surprising when you're not really angry about something, just a bit vexed. Have we become so used to being rebuffed when we complain that we just don't expect to received any kind of response? Or, if we do get a response it's snarky or implies that you're just a whiner.

I bring this up because I got a response, in less than 12 hours, to a not flattering observation of the grocery where I do my shopping. 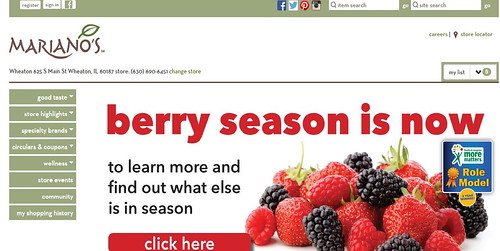 I hadn't really shopped since early March because I just haven't been home, so yesterday's shopping trip was of the "I'm out of this and this and this and this" variety. I take a small cart which, when filled with my bags and my purse and groceries, makes me consider the impulse purchase more strongly. "I don't have room for a bag of chips," I can say, and pass the enticing display right by. (I did get the vanilla ice cream because there is an NPR brownie recipe to try.)

I get to the check-out and we're moving along swimmingly. The clerk asks if I want my meat (pre-made hamburger patties which I'm more likely to cook when I don't have to make the burger. I know that sounds weird, but when you must cook as you have energy, you look for short cuts.) in a plastic bag. I said, "No, thanks. It will be fine." I didn't watch the bagger.

When I get home and start unpacking, I find the bagger has put my meat, the cat treats, the dish soap and the toothpaste and cough syrup into plastic bags. I have four plastic bags. I stood in my kitchen shaking my head. It's not the bagger's fault, necessarily. She was doing what she is trained to do. I know the rationale behind putting dish soap in a plastic bag. If the top pops open unexpectedly, the bag contains the soap that might squirt out. But the chances of that are remote if you handle your bags carefully. And the cat treats and the toothpaste and cough syrup? Those were completely lost on me why they would be separately bagged.

At first I wasn't going to say anything. It's just a bag. But the ability to easily recycle plastic bags is gone. Mariano's had has to replace their small plastic recycling bin with 2 large ones and both are usually full to overflowing when I attempt to recycle bags. I guess I just don't hit the right time for a clean bag.

As I put groceries away, however, I got to thinking. I bring my own bags. I have a hard time recycling plastic bags. The clerk asked if I wanted the meat in plastic. I said, "No." She didn't ask about anything else. Was she supposed to? I don't want plastic bags. If this is how baggers are trained, then I need to express to Mariano's that some of us just don't want plastic, that we bring our own bags from home for a reason. So, I logged into my account and sent them a comment with that sentiment. I also expressed the feeling that it must be hard to provide bag recycling but if we reduce the need to use plastic bags in the first place, Mariano's bottom line is increased by having to buy less of the things.

Not 4 hours later, there was a reply in my in box apologizing for the less than stellar service. The store manager, himself, wrote the email. "I will speak with our Front End leadership to touch base with the baggers to be sure they are asking each customer that uses reuseable bags if they would like plastic bags." It's not a criticism of the bagger herself. She didn't squash my bread, In fact, I really liked how efficient she was in packing things. It's just that she put stuff in plastic bags that didn't need to be in plastic. The acknowledgement of this and the decision to talk to the bagging leadership is impressive, as is the fact that he wrote back within 4 hours of my sending the email. They have offered me a gift card "for my trouble".

So, the bottom line is, a well-reasoned, calm expression of a concern is appreciated. It always has been. My reaction to the acknowledgement that I had a legitimate concern is something which struck me. I wasn't expecting a gift card, far from it. I wasn't even expecting a reply. I just wanted to point out something they, maybe, hadn't considered. I assumed they would read it and chuck it into the digital equivalent of the "circular file". I'm grateful they responded how they did. Good customer service makes strong bonds with customers.