The past two weeks were filled with a project in Rock Island, Illinois. It's "merely" a 2 1/2 hour drive from the house to the project so I could drive out and back in a day. Of course, when a day starts at 7 a.m. and doesn't end until 9 p.m., and the next day I am riddled with exhaustion, I have to question what the heck I'm doing to myself.

But, I got up and drove, several days running, to Rock Island. You get to know the road when you're on it so much. I came to know where I could turn to avoid some things and I finally saw the campus of Augustana College.

If you don't know Rock Island, it's part of what's called the "Quad Cities". This encompasses Rock Island and Moline on the Illinois side and Davenport and Bettendorf on the Iowa side. The cities have spread so East Moline and Silvas, on the Illinois side, meld together with Moline. As I traveled through each city, the ancient nature of these river towns became apparent. There are buildings and homes that date from the late 1800's. Manufacturing, because the Mississippi River made it easy to procure goods and ship them out, was huge in the area. John Deere's corporate headquarters and manufacturing facilities are still in Moline.

So, it shouldn't have come as a surprise that I passed by a rather old graveyard. The highway, Illinois 92, splits to become one way in either direction around this graveyard, which is attached to a park. When I first passed by, it was Spring Break, and there were people fishing in the pond in the park. There are picnic facilities and what looks like an historical building on the property. It looks to be a very nice public park.

The thing that bothered me about this was one lone gravestone I saw as I headed south. You can't see it in the debris of the shoulder. 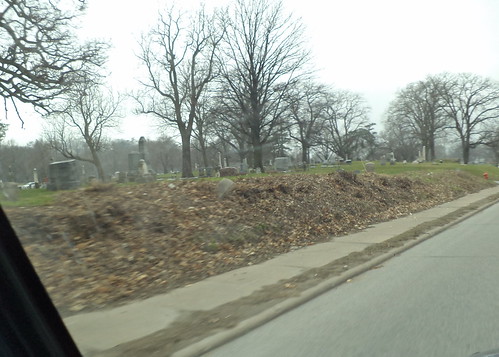 There are a lot of old stones in this graveyard and this stone appears to be old as well. Here's a photo with the marker highlighted. 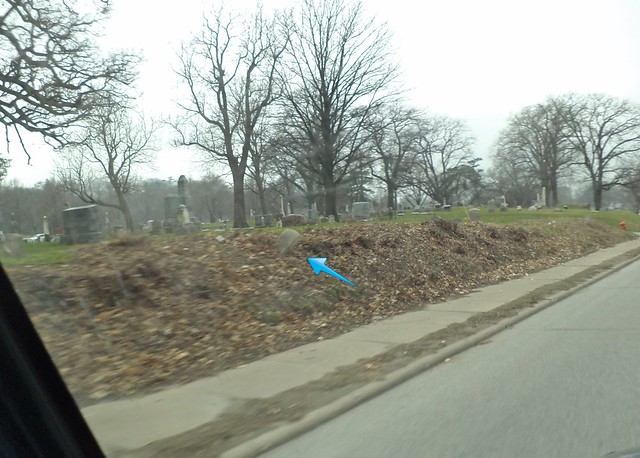 I discovered, in chatting with people on the job, that the Quad Cities had a Civil War prisoner of war camp. It was located on ground where the Rock Island Arsenal is. There is a marker to the camp on the arsenal grounds. Many black families in the Quad Cities can trace their ancestors to men who came to the camp as workers or guards. I didn't know any of this.

The gravestone in question doesn't appear to be of pre-1920's vintage, but it's possible it is. In any case, I wonder if there is a vault or, at the very least, a casket attached to the parcel where the stone is. It seems more than a little disrespectful that this stone is askew. It's also probable, given the stone's tilting with the erosion of the shoulder, that there is no family left to care whether it remains upright or tilts farther to the right.

I can't find, in the City of Moline's web site or on Google, a list for the name of the park or the cemetery. This could be a case of not having sufficient funds to move the grave so further erosion doesn't reveal more than just plant roots. Still, I'm kind of surprised it's left like this. I hope there are plans to fix it.