On Saturday, March 28th, I met a guild member from my World of Warcraft guild, in Chicago. Ken and I were trying to remember how long he's been in the guild. His son is 5 and I remember when he was born. Ken played with one hand while cradling his newborn in the other. That's the thing about this game. I feel as if the people who have stayed in my World of Warcraft guild for over 2 years are people I can consider friends, so when they say they are bringing their 5 y ear-old to Chicago to see the Shedd Aquarium and Field Museum and would I like to get together for dinner, I am there.

We struggled with finding a reasonably inexpensive place to eat that had a nice vegetarian menu as Ken and his wife are vegetarians. His son twisted his ankle on Friday and decided he was too tired to come eat with us. In reality, what adult conversation is going to appeal to a 5 year-old? So it wound up being Ken and I. That was okay. I found a place, Park Grill, which is located in Millennium Park. Easy to get to and reasonable prices. We parked in the Millennium Park parking garage which was within a very easy walk.

The restaurant is located under one of Chicago's best known landmarks, The Cloud Gate. 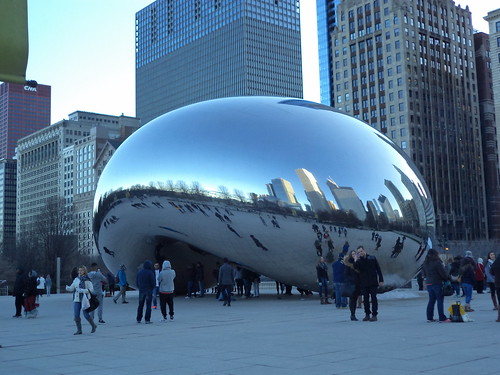 Everyone calls it "the bean". You can see why. The highly polished surface reflects the city in exceptionally beautiful ways. It was a bit of a brisk evening, but clear and cloudless. This is approaching the bean from the northeast.

When you live somewhere for a long time, you can possibly be forgiven for taking some things for granted. Ken's excitement at seeing this made me realize that I like it too. I like living in this area, having these types of places to go. The park is free. "Meet me at the bean" is a common landmark for concerts or Taste of Chicago or to watch the parades or running races held on Columbus Drive to the east of where we were. As we approached from the west to go up the steps to the bean's location, it reflected the setting sun. I should come down here some time in the summer before sunrise and capture that moment when the morning sunlight hits the surface.

The other neat thing about the bean, something I had totally forgotten, was the "interior". 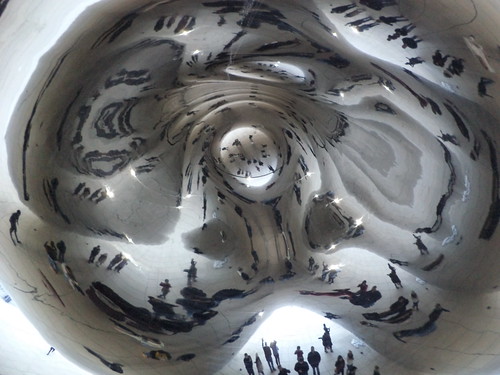 Isn't this cool? The undulating surfaces of the interior create an Escher-esque image. Those spots of stars are my camera's flash so you can see how the reflections flow into and around each other. I'd forgotten just how amazing this is because I don't come down here and look as a tourist would. I drive by on my way from point A to point B.

Ken's giddy exultation at this work of art was infectious. We had a great meal, too. As we were leaving the restaurant for me to take him back to his hotel, we heard applause and cheers. It's well known that the bean is one of the hot spots for marriage proposals. Congratulations to whomever it was.