Every year since 1980, I have purchased the "365 Word-a-day Calendar". Some words, when I rip off the new day, I know. Some I'll never add to my vocabulary and some have found their way into my lingo. Some words have special meaning. I saved them. I found three when I was cleaning in the basement in preparation for a new washer.

Thankfully, I wrote on the page what happened so, when I cleaned years in the future, I could remember exactly why I saved that word from that date. 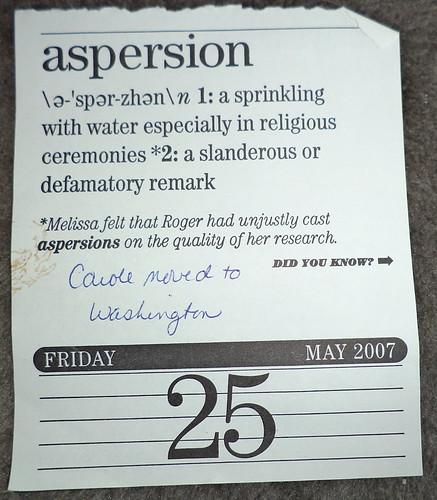 This was the last day Carole lived in Wheaton. Since this date, she's lived in Connecticut before moving to her current, and final, home in Virginia. We didn't have any kind of religious ceremony, but I do remember crying while sitting on the front steps watching her drive away knowing that this was a necessary part of raising a child. You give them wings and trust they paid attention to some of your instructions on how to use them.

Here are two more which also elicited tears. This word seemed particularly poignant on this date. 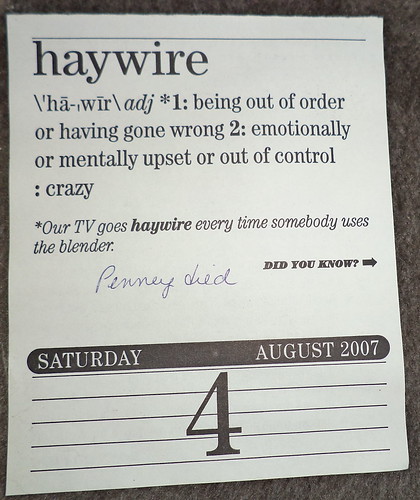 Penney was a gray cat we adopted in 1992, I believe. Kidney disease made her waste away and I finally couldn't stand watching her try to walk to the bathroom to get a drink of water. Pam drove me to the emergency vet my vet recommended and I said, "Goodbye". Even though it's one of the kindest things you can do when a beloved pet is suffering, it's still a heartbreak. That day, the world went haywire.

Finally, there is this word. 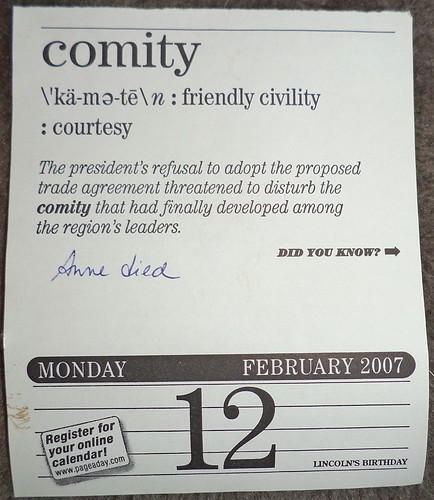 Anne was my English pen-pal. We had known each other 35 years at this point. We were the best of friends and confidants. We went through first crushes, high school, college, engagements and marriages. My ex-husband and I flew to England in 1982, while I was pregnant, to attend Anne's wedding. We had children within a month of each other. She had twin girls. We went back in 1996 so our children could meet. She was with me when my marriage crumbled and when Carole and I were on our own. We went through the raising of children and their lives.

Then liver cancer struck. She was diagnosed in 2004 but seemed to have it beaten to the point that, in April of 2005, I met Anne, her husband, Graham, and son, James, at Walt Disney World for a week of fun. She looked so healthy. We had a fantastic time.

But the cancer returned in early 2006. She never told me how bad it was. Her Christmas letter was filled with news about the family. We always talked at New Year's. She would call me at the stroke of midnight and hold up the phone to the TV so I could hear Big Ben ringing in the new year from England. She did the same thing as 2006 turned to 2007. She never told me she had been in bed since 5 that evening and had to be helped up to call me at midnight. She wrote a short, one-page letter, "from the couch in the living room, by the fire" as they called the gas furnace, in early January. I never heard from her again.

One of her daughters called me the above evening to tell me she had passed in her sleep. Her husband, Graham, had contacted me at the end of January, after receiving my reply to her early January letter. He realized she had not told me, in an effort to spare me worrying, how sick she was and that hospice had been arranged. They were just waiting. I have to admit that every phone call from January 28th onward brought dread. In a way, it was kind of a relief knowing she was not suffering and not trying to keep the British "stiff upper lip" anymore. Graham said he never told her that I knew what was going on.

I looked at these words as I paged through a stack of papers, invitations, mementos which were on a shelf. At the time, it was important to save these. Now, I have reached the point where I can let them go and be, simply, words of the day. I don't save words that have a special event occurring on that date anymore. I unconsciously decided they were just words. I miss Carole. I miss Penney. I miss Anne. Time has moved on but the memories stay with me in my heart where they belong.