So I have this itch to redo a section of the house. It can't be a very big section and it has to be a project that I can do over the course of a weekend. There are so many projects and potential projects when you own a house, it gets very daunting when contemplating them. Add my RA to the mix and any project has to be broken down to small pieces which can still fit into the total. Or I have to pick projects which are small in their own right.

When you enter the house from the back deck, you walk into a small cubicle. 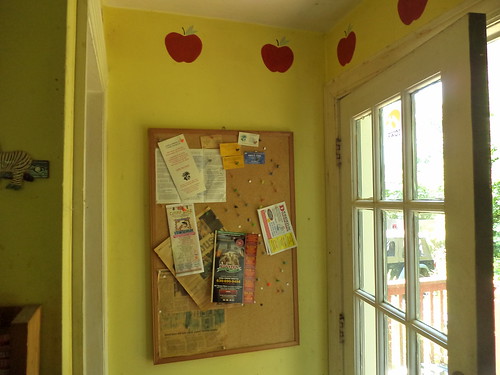 It's an extension of the kitchen, one of the first rooms we painted when we moved in. I wanted it a sunny yellow to reflect energy and happiness. The apples along the top, hand stenciled, came much later in the process. The ceiling, trim and back of the rear door are white. There has always been a cork board on that side of the wall. It's a place where menus and business cards and coupons go to die. About twice a year, sometimes more, sometimes a lot less, I clean it off. It used to be useful space. Now, it's just a cork board. I use the front of the fridge for things like this. 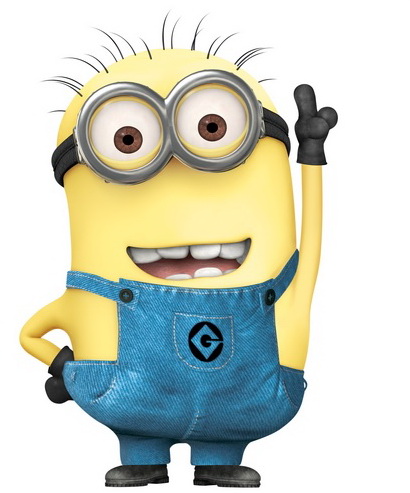 I saw the announcement and thought, "This would be a great color for part of the kitchen". I think it might be too overwhelming for the whole kitchen, although perhaps, with a white ceiling, it wouldn't be quite so bright. I like bright and sunny but think of the point in the first movie where two minions and Gru are in the air vent in Vector's building. It's dark so one of the minions gets shaken and turned on like a light bulb. I envisioned painting my kitchen minion yellow to have that kind of a result. That would be a bit too bright.

But then I had the thought, what if I just painted the entry? I could do that. I'd paint the whole entry minion yellow from the baseboards to the ceiling. The back of the door would be yellow, which might, the more I think about it, clash with the blue gray of the front, but, technically, you'd only see that strange color combination when the back door is open. I haven't put up the bug screen yet, something I need to do after having some big ol' flies come in the house over the weekend. This could work. I'll probably need to prime over the red of the apples although the way paint is made now, manufacturers advertise how you can paint a light color over a dark color without the dark color bleeding through.

When I bought the lawn mower, I inquired as to whether "Minion Yellow" had been released as a paint color. The press release implies it has, but it wasn't at my Ace Hardware. Ace has mixed paint colors for me before and the guy at the paint counter said to bring in a sample and they could match any color. On the last trip to the store, I scanned the paint chip offerings in the yellow section. It seems to me, there are yellow colors they can already make which are very, very close to "Minion Yellow".

Paint strips don't photograph very well. I'm leaning toward the lighter end of the strips, particularly as I'm going to coat the whole area in yellow. In the top strip, color 332 is labeled "banan-appeal". This might be a nod to minions. It's a nice color, too.

I have some peeling paint at the lower right of the cork board wall, where the wall abuts the back door. I would need to scrape that off. I'd need to wash the walls, the trim and the door before painting. And I'm on the fence about the cork board. The board that's there is too big. I just don't use it for anything other than storage. There is paint, called "Chalkboard Paint" which turns a section of wall into a chalkboard. You can write on it and wipe it off. I could put important numbers, such at the number for the emergency vet clinic, my doctors, etc, on a small section of chalkboard. Or I could get a smaller cork board, maybe a square would be better. There are so many more options now than there were when the kitchen was originally painted.

Last year, my friend, Meredith, sent me a minion stencil. Instead of apples, I'm thinking minions. I'm not sure what color they would be, but a few randomly placed minions in this space would be very fun.

I'd like your opinion. Which color is close to "Minion Yellow"? What should I do with the cork board area? It doesn't get sun except in the summer, when the sun sets to the northwest. I could put art work there. Decisions. Decisions.