I'm sure I've done this before in a blog post from years past. I mean, I have this poem memorized, the whole thing.

Two roads diverged in a yellow wood
And sorry I could not travel both
To be one traveler, long I stood
And looked down one as far as I could
To where it bent in the undergrowth

And took the other as just as fair
And having, perhaps, the better claim
Because it was grassy and wanted wear
Though as for that, the passing there
Had worn them nearly about the same.

And both that morning equally lay
In leaves no step had trodden black.
Oh! I kept the first for another day
But knowing how day leads on to day,
I doubted that I should ever come back.

I shall be telling this with a sigh
Somewhere ages and ages hence.
Two roads diverged in a wood, and I,
I took the one less traveled by
And that has made all the difference.

Setting aside the metaphor for our journey through this life, I often think about this poem when I am traveling to far-flung job. I took a vacation to Minnesota over Memorial Day weekend. Tacked onto the front of the vacation was an inspection job of 5 homes near Dickeyville, Wisconsin. I know that place. I know how to get there, but I didn't know where the homes were.

Now, Dickeyville is not a huge metropolis. There is a grotto there. (I didn't stop. I should have.) Since it's off the beaten path, it's not very crowded. There are a couple of large gas stations and a couple of restaurants, but the town is not very big. I probably could have driven around and found the place where the homes were. But, because I was on the clock and I wanted to be efficient with my time, I looked up the addresses in Google maps.

MapQuest, Bing Maps, Google Maps; all web sites where you can get driving directions from point A to point B. Plug directions into your smart phone and a somewhat comforting female voice will say, "Turn left at the next intersection, in 500 feet." You get where you're going, usually. Sometimes relying on that comforting female voice instead of map reading skills will get you in trouble.

I don't care for verbal directions unless they come from someone sitting next to me, reading where I have to go. I'm very much old school in that I want my directions printed out. I can read a map. I know how to use that information. Map reading was taught in school. It was deemed a necessary skill to have. If our entire GPS network were to crash, I could still find my way to a new location because I know how to read a map and follow directions.

We do complain about the directions given out by online map services. "I think I can get out of my neighborhood," we say when the directions tell you to "go south and then turn right onto Liberty. Go two blocks and turn left onto Blanchard. At the 'y' intersection, stay to the right and go onto Willow. At the next stop sign, turn left onto President." Yes, thanks. I know that. I go that route to the Dunkin' Donuts. Companies have amended their directions so you don't have to print what you don't need. Sometimes, you have an option for a scenic, as opposed to direct route. Still, the directions can be head-scratchingly strange.

Thanks to Google Map's directions, I found myself on this road while heading from my home to Dickeyville. 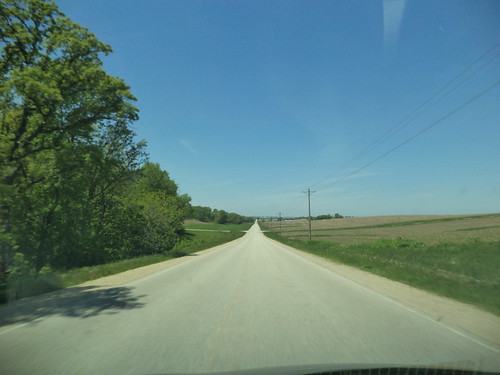 This is Wisconsin Highway W near Shullsburg. The most direct route took me down 2 lane highways in south and southwest Wisconsin, very nearly deserted of vehicles.

The same was true of driving home from Minnesota. Although the directions seemed clear and the roads recommended were among the more well-traveled, sometimes, the signage can leave a little to be desired. I missed a turn and found myself heading east on nearly deserted roads. 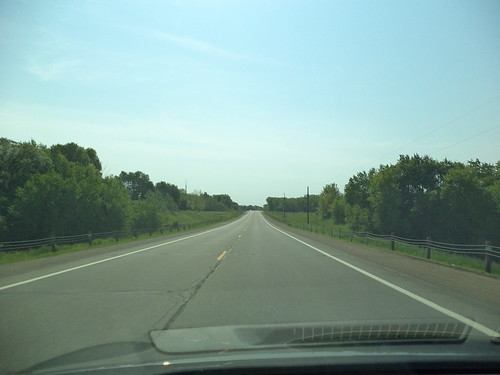 Unlike the trip to Dickeyville, where I was on a clock, coming home, I had time to wander. I did think about turning on my phone's GPS to figure out where I was but I knew the interstate was south of me. So if I headed south, eventually, I'd find it and I could continue east and home.

Still, I took the one less traveled by. Did it make any difference? Probably not, but I got to see sections of the country I wouldn't see if I hadn't relied on "the most direct" and then missed a sign. I think we can close ourselves off from the joy that comes in the road less traveled. If you have the time to wander, I think it revitalizes the soul.