It's been quite enlightening to clean off piles of stuff in the basement. There are things with meaning, but a lot of things, particularly of the paper goods category are just not necessary for me to keep anymore.

For instance, this was a big event in Iowa Hawkeye football. 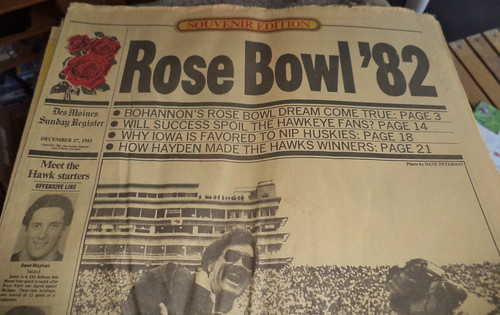 The last time Iowa won the Big 10 Conference Championship prior to the 1981 season was in 1960. This was huge, huge, huge. The state went black and gold. Iowa was favored to beat Washington in the Rose Bowl of 1982. 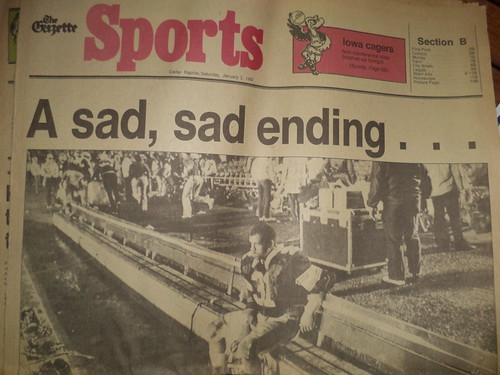 The photo says it all. We were demolished by Washington 28-0. There was controversy when it was reported a couple years later that our "star" running back had been contacted by a sports agent between Thanksgiving and Christmas. He supposedly told the guy that his draft spot in the NFL draft that spring would not be very high if he got injured, so supposedly, the guy didn't try as hard as he could have to score when we were close to the Washington goal line. I have no idea if the story turned out to be true, but, when the running back left college that spring before graduating, you had to wonder what was up. For the record, he was drafted way late and I'm not sure played with any pro football team.

The coach, Hayden Fry, was vilified, and I believe rightfully so, for the manner in which he coached the game. He made some very questionable substitutions, putting in guys who, although seniors, hadn't played in many games. You want the seniors to experience being on the field in a bowl game, but he didn't have the team on the field that had won the championship. Hawkeye fans were angry.

Also of no meaning to me is this paper. 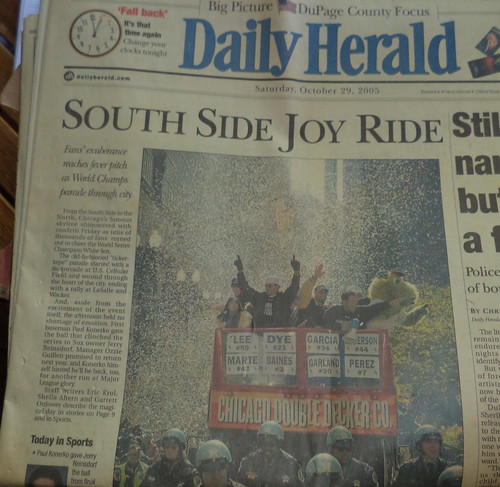 This is the last time a baseball world championship was in Chicago. The Chicago White Sox won that year. I remember I was downtown on a night job the night they clinched. Even though the job wasn't slated to wrap up until midnight, we were sent home, to get out of the city before the crowds took over downtown. I'm not a White Sox fan but I saved the paper because, well, it was important at the time.

Speaking of Chicago baseball, this paper marked a milestone on the north side. 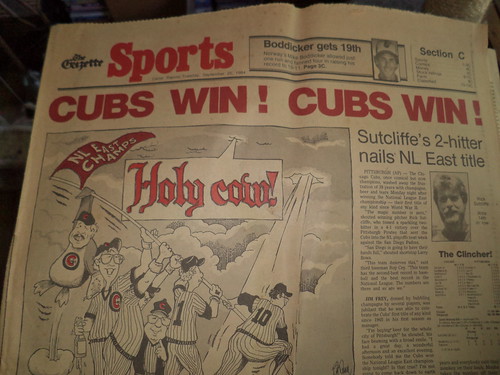 The Cubs hadn't won anything since 1945, when they lost the 1945 World Series. This was "merely" the National League Eastern Division Championship, but it could have been the World Series as much as the fans celebrated. My dad, an ardent Cubs fan, was jubilant. The Cubs lost to the San Diego Padres who went on to win the World Series. The Cubs have won a handful of division pennants since, but, so far, I've not found any newspapers saved from those wins. I think it was because this was so sweet to fans. Still, I'm not saving it. I just don't need newspapers I won't read.

Finally, I have this bin full of things. 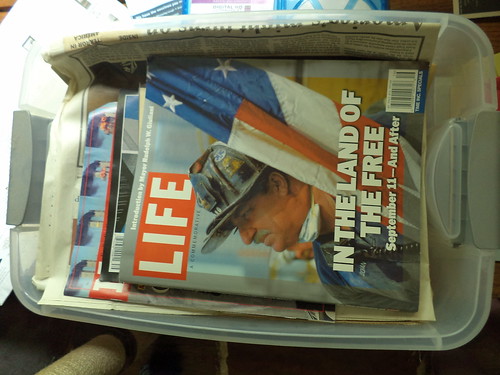 This is all the printed material I saved from 9/11. My pen pal, Anne, sent me The Times of London with its coverage of the attacks. I have looked through everything and, for me, it's not important to save this. I know precisely where I was when I heard the news of the initial hit on the towers and where I was when I heard of the towers' collapse. I was out in the field, 90 minutes, from the office. I remember looking up at the clear blue September sky and wondering what I would do if I saw an airplane. For me, the memories of those days are what I want to keep, not the printed materials.

I know there is probably a market for these items, possibly on eBay, so I'm going to look into selling them. There is value to someone in having these carefully preserved and not yellowed paper goods.

In a way, it seems harsh to give away things which remind you of major life events. But I'm whittling down things I've saved to what really has value to me. I don't denigrate the memory of those who died in 9/11, but these mementos would be better in someone else's hands. It's part of the process of tidying my life.