So You Really Don't Have To

Summer. The very idea screams ice cold beverages. I'm trying to wean myself from copious amounts of soda. It's no secret that the stuff rots your innards, but there really is nothing like an ice cold Dr Pepper after a day spent on my feet. But what's this? 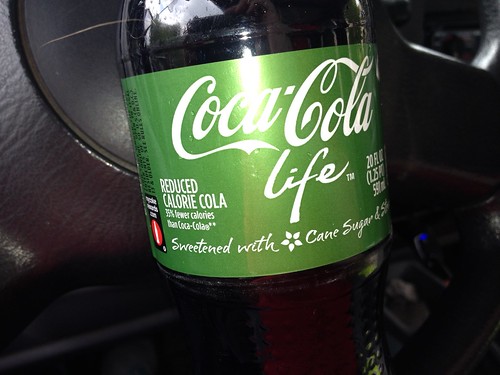 Of course it jumps out at you because the label is not the familiar red. I didn't know anything about this. Granted I don't watch TV where it might be advertised, but with all the product placement on the internet, surely I would have become aware this product existed.

What attracted me was the "sweetened with cane sugar" line. For you 'young-uns', that's how soda used to be sweetened. The sugar may have been from sugar beets but it wasn't the high fructose corn syrup we hate. It was sugar. Soda tasted a bit different. It was hot and I was tired, so I bought a bottle of Dr Pepper and this and headed home.

Traffic getting home was horrible. There was an accident on the Eisenhower expressway which closed the 2 left lanes AFTER I got onto the roadway. We sat for 45 minutes while it was investigated and cleared up. I was in one of the affected lanes and could only watch as traffic inched by me on the right. But, I was headed home so it was simply a matter, for me, of waiting until I could move. Besides, I have jazz on the radio and cold soda in the car.

This stuff is awful. 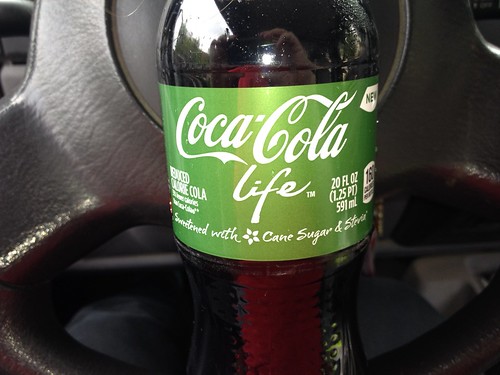 Oh heavens is it bad. It's not just sweetened with cane sugar. After I bought it, I noticed the "Stevia" on the label. Maybe it was worse because I had Dr Pepper before this. No, no. This is just bad. There is no familiar "Coke" taste here. It was all chemically and there was a horrid metallic aftertaste. The smell of the product wasn't the familiar "Coke" smell, either. Is that a product of the stevia? I can't remember that I've had anything with stevia in it; that I've been aware there's stevia in it, I should say. I just know this was terrible. I had a half-full bottle of water on the floor of the Jeep. It was over by the passenger door. The aftertaste was so awful I struggled, while parked, to reach it, to wash the taste of this out of my mouth. I didn't finish the Coke. Three-fourths of the bottle left was poured on the weeds in the back yard.

Bottom line is, don't, just don't, spend any pennies on this. Maybe that's why I hadn't heard of it. It's terrible, terribad, horrible, horribad, whatever appellation of awful you care to use.