The Things I See

I had a week of vacation and then work has been crazy. I've been in the city on a "we need it now" job. It's a lot of walking and a lot of photos, but people have been really nice and the weather was perfect for working outdoors.

As I was inspecting the exterior of a building, I happened to see this. 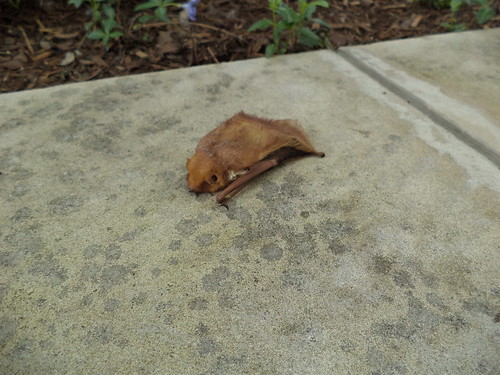 That's a little brown bat. It was quite deceased. My guess, given where it was, it hit the side of the building, although, with echolocation, you'd think bats would be able to avoid things like giant buildings.

But, what this says to me is that bats are alive in Chicago and that's a good thing for the ecosystem. Little brown bats eat insects, including mosquitos. We've had good conditions in Chicagoland for the mosquitos that carry West Nile Virus to live and reproduce. Bats will eat those. This project is not too far from the Chicago River so it's not all that surprising there are bats.

At one time, I was considering putting up a bat house in the yard. We need bats. They get a bad rap and I remember being scared of them while growing up on the farm. We had a colony living in the attic of the farmhouse. If you rattled the door to the attic, you could hear them squeaking. I remember a couple getting into the house, but dad and mom chased the intruder out. We didn't know that they are much better than bug spray for ridding an area of bugs. I hope, wherever this colony is, someone is watching over them.