In part of the space, on the south side of the extended downspout, I put a raised bed. In that bed, I decided to grow Mexican sunflowers and my usual peppers. I love fresh peppers from the garden. I don't buy ones which stay green. I buy "chocolate", yellow or, my absolute favorite, orange hued.

The sunflowers came as seeds. I bought these metal poppies and added them to the bed. 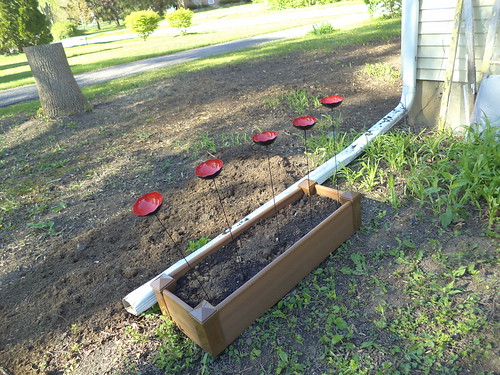 I found seed markers amongst all my garden supplies in the basement. 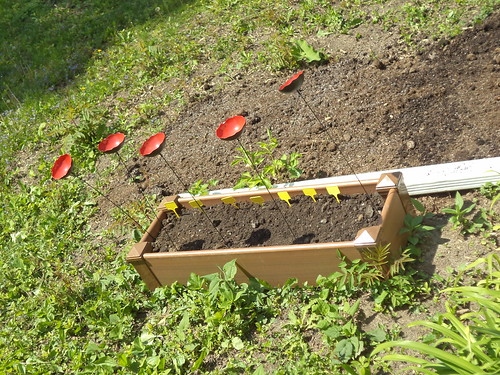 They marked the location of the sunflowers. I realized the poppies would get lost in the sunflowers so moved them to the front of the box.

The sunflowers took off. I swear they grew inches per day. The idea that the poppies cupped shape would hold rainwater did not account for the competition from growing and fully grown plants. If these are to do what it is claimed they do, provide spots of water to hummingbirds and butterflies, I can't plant something which easily eclipses their height. Pepper plants have the potential to interfere, but not like the sunflowers did.

When I bought the deck plants, I added 4 pepper plants to my cart. The sunflowers had just pushed through the dirt. Planters Palette puts out three-quarter size plants which have begun to blossom. You can stick these right in the ground or in pots and expect fresh peppers in about 2 weeks, assuming the bees aren't surprised there is something to pollinate. I had an orange pepper by the 3rd week of June. 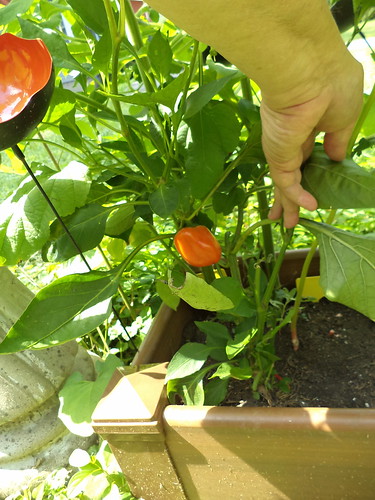 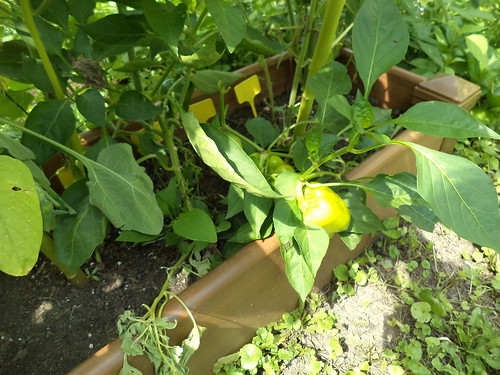 But they never got very big. I couldn't understand why. Then, while watering at the end of July, it hit me. Peppers love sunshine. You can see from the above photos, how the sunflowers shaded the pepper plants. I also seemed to have some issues with yard scamps making off with the small fruits, but, given their golfball size, I wasn't that upset. I got three whole peppers out of last year's crop.

So, this year, the sunflowers are going to the front of the house. This box is solely for peppers. I want to get poppies. I adore the look of poppies, and put them on the other side of the downspout. It would take a couple years for them to establish, but they would fill in that side so it doesn't look so bare. Or, I've contemplated getting a second raised bed. I don't know if poppies do well in raised beds. Something to read up on, for sure.

You spend years gardening and think, "I got this" and then, well, you don't quite have it. Learning as we go. That's the best part; that and fresh peppers.