I like plants indoors. I bring in my geraniums to overwinter. I have a zebra plant which I've had since my dad died in 1991. In my office, I have an aloe vera my sister gave me back in 2002 and a geranium I bought which I really didn't need on the deck. I might take that one home this spring. I'm not sure.

I also have an ancient spider plant. You know these; chlorophytum comosum. They have spindly leaves from a central hub and prefer to be pot bound. Eventually, they send out long branches on which is a small spider plant. This plant can be potted and grown. They also produce small white flowers.

The cats love to chew on it. In fact, this spring, when it's warm enough, I'm repotting this particular one into a smaller pot because the cats have chewed off one whole side. I have no idea how long I've had this plant, but it keeps going and going, enduring the chewing of its leaves. Hamlet is the worst.

Now cats eat grass. This is a known fact. It aids in digestion and a cat with an upset stomach will gravitate to grass as a means to sooth the tummy. That they turn around a couple hours later and regurgitate said grass onto the middle of the hallway floor is no matter. The tummy ache is gone. There are all sorts of grass products you can buy for this particular issue. The problem with additives to food is that I think there's a tactile pleasure derived from the chewing of grass and the leaves of my spider plant. Just providing "Greenies", for instance, a treat with grass in it, isn't going to solve the chew problem.

When I go get cat food, I have taken to buying a small container of oat grass. I got one over the weekend. Hamlet was beside himself. 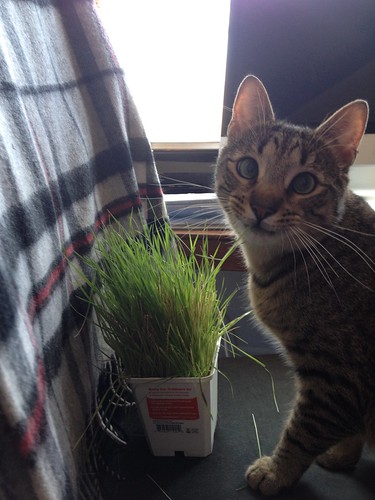 I unpacked it from the bag, wiggled it in his face and set it on the desk. He promptly jumped up and knocked it off, jumping down to chew. So I moved it to my office chair. 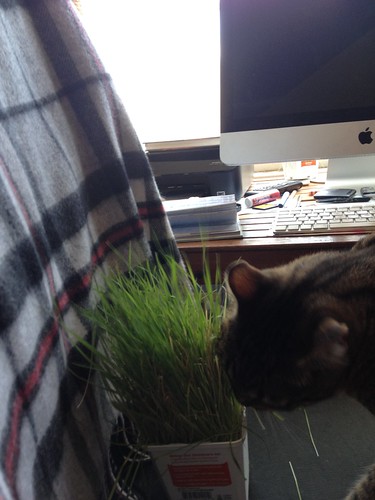 He was overjoyed. He goes looking for this, although he still chews on the spider plant. He knows he's not supposed to chew the spider plant and I yell, "NO!" when he jumps up to chew, but that doesn't stop him. I still come home to leaves on the floor. I don't really have a place to put the spider plant where he wouldn't be able to get it, to let it recover. I do think repotting into a smaller container will help because the larger container is just too big for most "Hamlet-proof" spaces.

Mija used to chew but she's given up on that, at least I think she has. She used to do her chewing when she thought I didn't see. She'd jump up on the window sill and sneak in from the back side. After catching her a few times, she quit. I really do think Mija and Pilchard love to see Hamlet get yelled at. Mercifully, unlike other cats I've had who eat grass, he doesn't throw this stuff up

This batch will last until the middle of next week, when it will be brown and dried. I water it every day and keep it in indirect sunlight, but there is a finite amount of grass which can be produced. Somewhere, I have a container with oat seeds, which just needs water. I should find that and see if it will grow. The cost is minimal for one of these, but I don't have to go back to the store for food until the end of the month and I'd rather use the $5.99 for other things, like breakfast at Panera.