It's taken awhile, but the integration of Hamlet into the household is finally complete. This isn't to say we don't have our days. Last night, for example, he and Pilchard were wrestling in the hallway outside the bedroom. That's fine, but not at 11:45 pm. I yelled at them to knock it off. They dispersed and Hamlet went on to chase Mija for a few minutes before I yelled at him to knock it off. Honestly, I need my sleep. They just look at me. "Oh?"

Things were anything but pleasant in early fall. I don't know if it was kitten exuberance or anger at having to share space with him, but there were some fights. I came home, more than once, to scratches on his nose. As I was never around to see the altercation, I had no clue what was happening. It felt like I was doing a lot of yelling at everyone. Unlike dogs, cats don't respond to yelling with groveling. They view the raising of the voice as an attack. I would yell, "Knock it off", they would scattered, and Pilcard and Mija would growl and hiss at me. It was stressful for all of us.

I asked my vet what could be done. Clearly Hamlet's presence was stressful, but I couldn't give him away. Poor little guy. He's cast aside in a driving rain; abandoned on a front porch, alone; stuck in a bathroom where dogs are on the other side of a door, with little in human contact. Then he rides 16 hours under the front seat of a car and is confined to a room, bigger than a bathroom, to be sure, but where there are other cats who are clearly not interested in welcoming him into their home. I needed to figure out how to mitigate the aggression. My vet recommended this product. 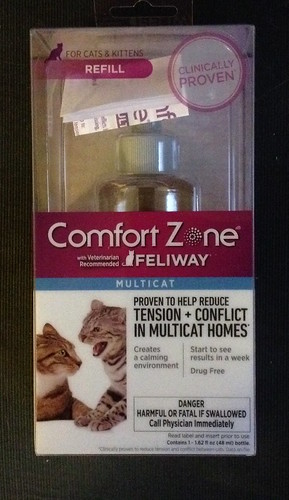 I was using a product created by Jackson Galaxy and getting no relief so I thought I'd give this a try. What did I have to lose, really?

The set up is simple. 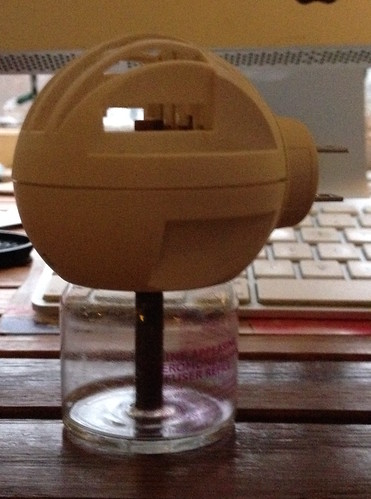 On the top is a diffuser which plugs into an outlet. The bottle of pheromone-enhanced liquid is inserted into the bottom of the diffuser. 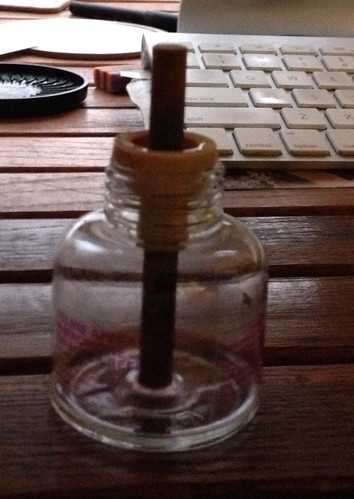 The whole of the packaging is recyclable and the bottle lasts a month. I have it plugged into a socket in the living room, where we spend the majority of our time. 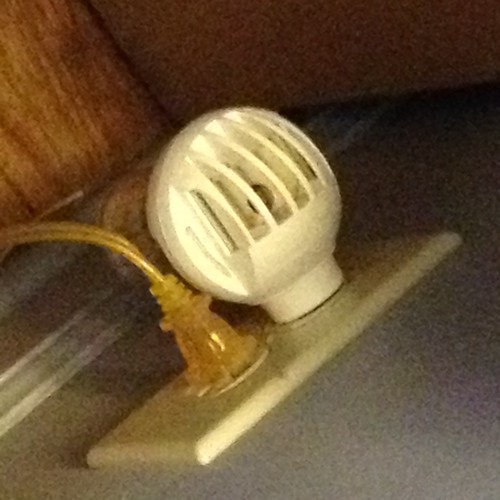 I was skeptical when I bought it. It's not a cheap investment. The initial setup is $25 with each container refill at $25. I set up the first test in October of last year. There was an immediate difference. Hamlet still has more energy than, by rights, anything should have. He seems super-charged on weekday mornings when the radio comes on and I don't get out of bed right away. He's also got excess energy at night, but that doesn't seem to be quite as much. If only I could bottle it.

The growling and hissing died off. The energy seems channeled into more appropriate things like chasing around the house. I think having this, a mood smoother, has allowed Pilchard to see the benefits of the chase and then wrestling him in the hall. Part of me wonders if I can get rid of this and have the benefits, or if that would result in the return to the fighting of early fall. I'm going to be going out and about as it's our busy time of year so I don't think I want to change things right away.

I'm always loathe to recommend a product because "my mileage may be different than yours", but I strongly endorse this. I think it has helped ease Hamlet into the household, made him acceptable. I still have some "knock it off" moments, but life is certainly much smoother with this plugged into a living room outlet.