You Can See the House Now

Okay, now that the ash is gone and it's spring with summer approaching, what would be the next, somewhat logical, step in yard upgrades? 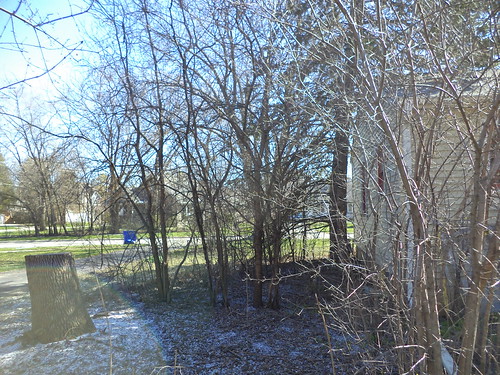 You know, I could take care of this mess.

We we moved into this house, along the downspout were flowering bushes. I don't even remember what they were but they were really invasive and had spread. So, I spent a lot of time digging those up. Along the foundation of the house in the back are tiger lilies. Did you know they are ridiculously hard to kill? I found oven cleaner works. (Yes, there is a story behind that.) To the right of the ash stump, there used to be French lilacs. They are nice, but I prefer Persian lilacs, which have that deep, lilac scent, even though it lasts for roughly a week. The French ones didn't have that much of a smell. 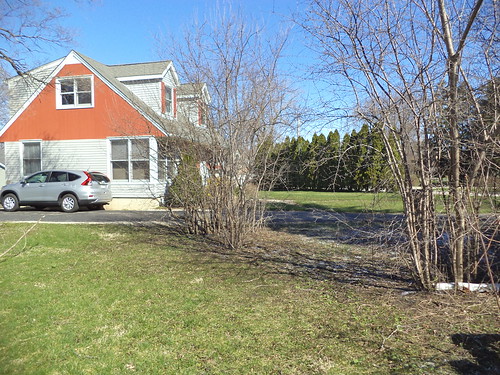 The patch in the center photo used to have a large Persian lilac in it. Buckthorn, a horrible, invasive European import, has taken over all these patches. Along the north side of the house, it was just a mass of, what I call, trash trees. You can see this, clearly, in this photo from the post below. 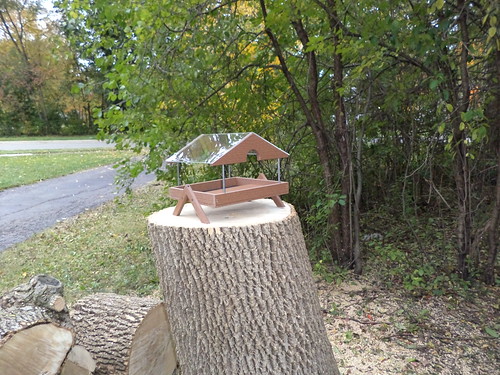 All that stuff was encroaching on the north side of the yard, crowding out the grass. There was an abundance of branches and it was difficult to clean in there. But, and this was huge for me, I had attracted a wealth of birds to the yard because they had a place to hide. If you're going to feed them, it's important to have a place they can fly to if they felt threatened. A lot of this stuff was insect laden which appealed to the insect eaters. While I had to take down the ash as it was a safety hazard, I, technically, didn't have to remove this stuff. It wasn't doing any real harm. It was just unsightly and encroaching on the lawn.

I wrestled with this all winter and into spring. I loved seeing flickers and thrushes and several birds I couldn't identify, in this brush. But, it came down to what did I want from my yard. I want to clean it up and that means getting rid of this stuff. So, I hired Evergreen again. 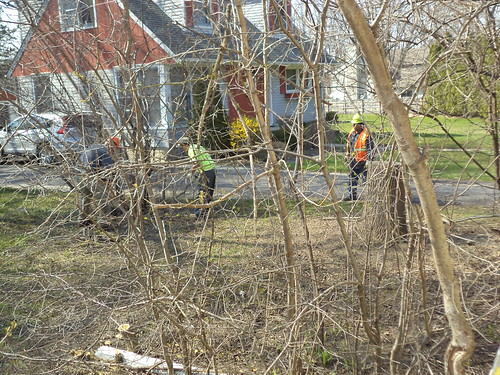 Here they are clearing the area where the lilac used to be. I thought there was a lilac still amongst the brush but, in looking closely, it had been overtaken by the buckthorn. So that whole patch was cleaned out. They also ground out the stumps. 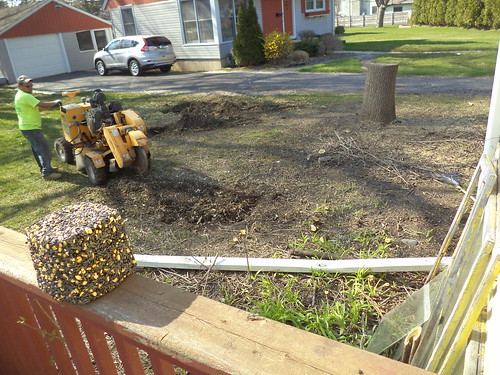 Once they left, I set out another block of squirrel and bird food. Here's the end result. 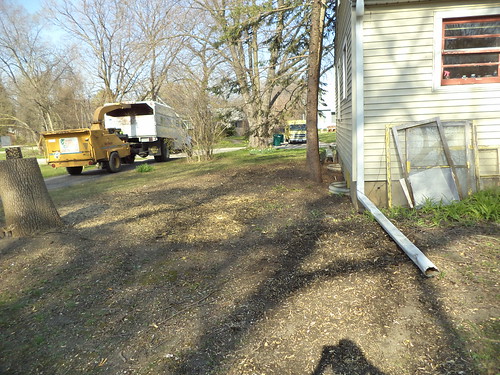 The tufts of green to the right are tiger lilies. With the brush gone, they have spread toward the ash. On the east side of the house, opposite where I'm standing, there is lily of the valley which exploded this spring, moving to the left into the area vacated by brush around the pine trees. Evergreen removed all the dead pine branches and the branches which touched the roof of the house. I have discarded ancient storm windows which I now have to slowly put out with the trash. I bought Round-Up and have sprayed all the trunks they couldn't grind around the pine trees because it would kill the pines. Yes, I know Round-Up is not a great herbicide to have in your house, but it does kill brush trunks and I need to not have those things resprout or all this money is wasted. You see another stand of brush near their truck. That's a lilac. I need to prune it back this summer. With this area opened up, I think it will flower more next year. There weren't many bracts on it this year and it's a Persian variety, the kind I love to smell.

I added topsoil and mushroom compost to the area around the downspout. As I'm going through my deck pots and planting for this year's growing season, old soil is being dumped here, too. I rake it all together. There will be more posts about yard rehabilitation. There's been a lot in my RA news feed about how being outside helps with fatigue and depression. Having come through a late winter, early to mid-spring depressive episode, I need to make my outdoor space inviting so I will want to be outside. It will help me and the girls like to come out when I'm out. I'm sure it helps them, too.