Tonight, the Iowa Hawkeyes men's basketball team starts the post-season of basketball with a game in the Big Ten tournament. It feels really weird to say the tournament is in Washington DC, but that's where it is this year. This is because Maryland and Rutgers, two universities decidedly NOT in the Midwest, are in the Big Ten Conference. Don't get me started on this. We're not even 10 teams anymore. I can see Nebraska but Rutgers in New Jersey? Oh well, they didn't ask me.

I got a pair of socks in early November because it's important to be completely Hawkeye on game days. 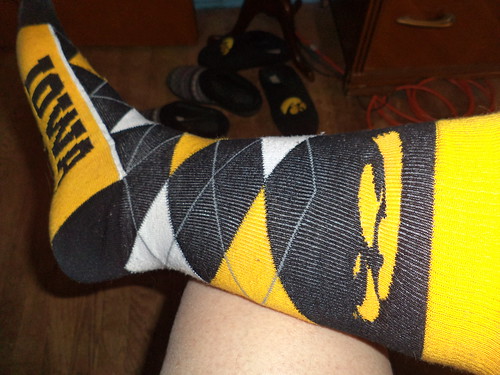 Yes, argyle Hawkeye socks. The "Iowa" is on the bottom of the foot. 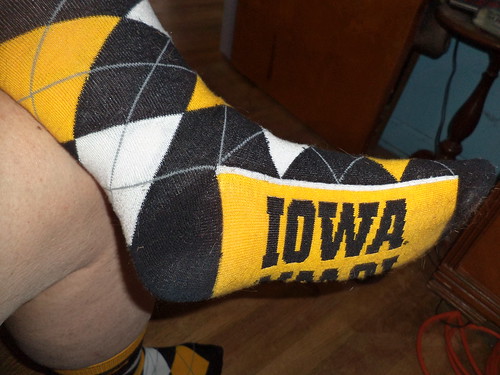 In keeping with my tidying efforts, when I brought these into the house, I got rid of a pair which had no elastic around the top. I have a few more like that. I keep forgetting to put them in a give away bag, but I don't always remember they don't stay up until I've been at work for 3 hours and have had to pull them up a dozen times. I can't give away worn socks so I wash them and then forget and they get balled up and put in the drawer. There is a Christmas pair I wore on Tuesday which are like that. This time, I put a post it on the lowboy mirror to remind myself that pair, still in good condition in the foot but lacking elastic in the top, needs to be given away.

Today's outfit includes my Hawkeye sweater along with shoes and socks.

The shoes have no arch support. They are more like slippers in that respect, but they are easy to get into and out of. The last time I worse this combination, the football team beat a much better Nebraska team by a lot.

I need to get a couple more shirts. My long-sleeved tee shirt is going on many years of wear and is slowly fading to dark gray. I don't have a plain Hawkeyes tee shirt as I sent the only one I have to my sister when Iowa beat Michigan in football last year. She wore it to work the next week; a job where Michigan gear was everywhere. "So, how about Saturday's football game?" My Hawkeye shirts are bowl game oriented, not straight "Iowa Hawkeyes".

I really have no illusions about how far the basketball team will go. They have not played well this season. I have listened to only one winning game in the few times I remember to stream the games. I'll try to stream it tonight, but it might be better, because I'm superstitious, if I didn't listen. They seem to do well when I forget the game is on.