I had to inspect a Seminary on the south side of Chicago. The building was over 100 years old; typical Chicago brick construction. It had always been apartments with warehousing on the lower floors. Old Chicago apartments have a distinctive design. Maybe it's true of all apartment buildings from that era; tiny rooms with small hallways. The seminary has retained quite a bit of the flavor of the building while modernizing it for priests. There is a communal dining area and a chapel with custom glass designs. 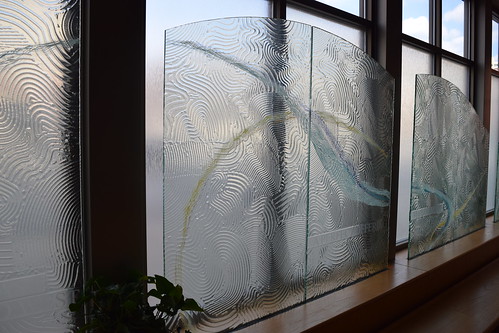 The chapel area was, before the seminary bought the building, an artist's studio. But the large space with the 2.5 story ceiling, was too much to keep up so he sold to the building owner and moved north. The priest who took me around to do the inspection said they rent the space to Russian Orthodox and non-denominational congregations for worship. They are pleased it's being used.

During the course of the inspection, the seminarian walking around with me was excited to talk about the next phase of his studies. He was going to Chile in June, for 3 months, but the 2nd week of March, he was going to Greenville, Mississippi, to help the order down there. They have, he said, a strong presence in that area of the country and all the seminarians spend time working there. I looked at him. "Greenville? I know Greenville." He registered surprise as I don't have a Southern accent, couldn't even fake one if I tried. "How do you know Greenville?" Well, the head of the English department where I went to college was a Franciscan sister originally from Greenville. "Wow. Small world," he said.

The priest with us now turns to me and asks, "Who was this sister? That's kind of specific because we're the only order down there. There isn't a convent." "Her name was Sister Thea Bowman. She started at a Sacred Heart school and joined the convent there. When she went to Viterbo for college, she joined the Franciscans, who, as you know, founded Viterbo." The priest stared at me. "You studied under Thea?" I did. She recruited me for the English department and got, then, Viterbo College, to offer me enough scholarship money that 75% of my college experience was paid for. He looked at me.

"I know Thea. Everyone in Sacred Heart knows Thea. Thea is held up as a paragon for activism. You knew her. I am singularly impressed." I have a pencil sketch of her hanging in my living room. She was the most amazing person I think I have ever met. I will never, in my entire life, be half the person she was. 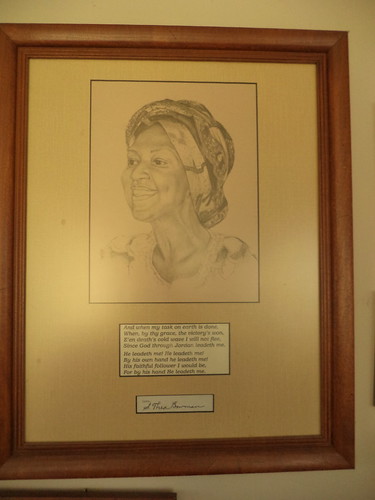 "Madame, I knew you were a very interesting person when we shook hands. I am convinced of it now. I never had the pleasure of meeting Thea. To know she taught you gives me more respect for you."

I didn't know quite how to react to this. I don't know people I could drop into a sentence. One of the guys from the construction company building the hotel for which I needed to do this inspection, was dropping names left and right. "Well, when I got married, I couldn't have some of the Chicago Bears come to my wedding because my wife said they would upstage her." You know some of the Chicago Bears? "Oh yeah, I'm good friends with...", and then he rattles off 5 names from the 1985 Super Bowl team. He knows this person and that person from Chicago politics or Chicago celebrity.

I am always suspect of such people. Do they really know them as in, could they call these people up and ask them to come meet for lunch? Or, is it a way of getting something because we believe in the power of "Six Degrees of Separation" and we want to be associated, however minimally, with someone "famous". There's no reason you couldn't drop any celebrities name into a sentence as being an acquaintance even if the best you know them is from the Access Hollywood TV show. I have no way to prove you don't know them.

Thea sang at my wedding. I have a cassette tape of it and I sometimes think it would be wonderful to extract that part to have. I wouldn't know where to go to get that digitized. I would never have thought to bring up her name in any of the Catholic places I have been. It was a toss-away remark, made by a young man, excited to further his faith which allowed me to say, with much pride, "I knew Thea. I was taught by Thea." I carry her lessons. When I read Shakespeare's comedies with their sexual innuendo, I can hear her voice say, "Well, we're going to jump over those lines because you're Viterbo students and you won't get the joke." Of course that made us read and reread the lines looking for what was funny.

I also feel the priest was impressed with my skills to begin with. Tara and I kind of have that effect. We have been openly dismissed by men who think we can't possibly know what we're doing and then we do it and, um, yeah, about that dismissal. Father John didn't dismiss me. He said what I did was one of the most interesting jobs he'd seen. But the knowledge of having known Thea added a layer of competency. She gave a lot to her students. She still gives. Wish I could call her and tell her.