It's That Time Again, Photo 10

When you work in a building just off a major thoroughfare, you can be sort of excused for not being aware of nature. It's all around me at home, but not really at the office. For a couple years, we had a pair of nesting Canada geese, but when their chosen nesting site was next to the front door and clients of the hiring service upstairs were being intimidated by a honking goose, management had take a more proactive job of moving animals that think the vinca at the front of the building is a good place to raise young. In a way, though, it makes the building kind of sterile. While I don't want to be dodging an angry, wing-waving father as I'm coming in to work, there was a bit of excitement wondering how many eggs had she laid and how were they faring.

On Thursday, I saw this gal in the parking lot. 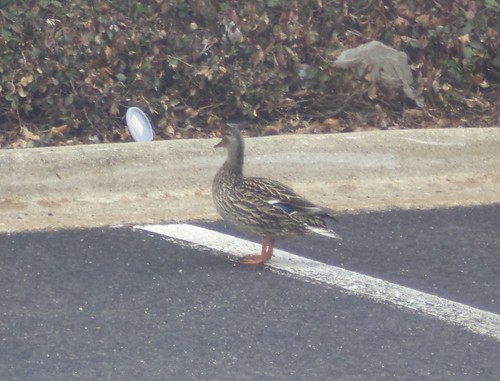 I didn't see a drake nearby so I don't know if she's single or if he was out searching nesting sites. The ground cover to the west of the lot is littered with debris. The clientele attracted by the job placement service above us seems to regard the parking lot as a garbage can. So the plastic bag and lid in the photo are just typical of what we have seen over the years. Actually, this whole area, between the lot and the building next to us, should be ripped up and replanted. It's gone untended for a long time.

I didn't see her yesterday so I don't know if she ambled southwest where there is an actual pond with actual food and actual nesting areas. Given the unkempt nature of the ground cover, she could be in amongst all that and we'd never see her, which is probably not a bad thing.