It's a Beautiful Day for a Ballgame, Photo 4

Last Friday was a monumental day in the history of Major League Baseball. The Chicago Cubs had their 100th home opener at Wrigley Field. That means that for 100 years, there has been a major league baseball team at Wrigley and, I might add, at this ballpark. A fan who attended that first home opener could still find their way around the park although it has been modernized and added to over the years.

I was vaguely aware this event was upcoming but it wasn't until I went into Dunkin' Donuts for my usual tea and 2 donuts that I realized the date was upon us. They had Cubbie donuts. 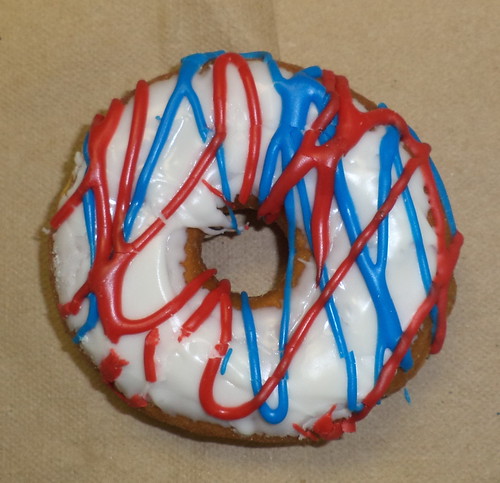 No, it's not a new flavor. It's regular DD with vanilla frosting and red and white frosting stripes applied. Fortunately, there wasn't a price differential between this and any other donut, even the Peeps ones. Those are donuts with either a pink or yellow Peep in the center. I had to get a Cubbie donut.

It dawned on me in the middle of the day, that I don't remember seeing a donut for the White Sox. Granted, their colors are black and white, but you could still do the stripes. It would be an extra bit of white and then dark stripes. They have a black and white "marble" donut already. Maybe they felt it wouldn't be distinctive enough from the marble.

I also wonder how popular this was. When I was at DD, they had 4 left. They tend to have lots in the back so perhaps there were more that I didn't see. If they put White Sox and Cubs donuts in the same store, I wonder which ones would sell out first? I'll have to pay attention to see if they do something for the Bear, Bulls and Blackhawks, not that I care, mind you, about any of those teams, but colored frosting covered donuts are fun.