Carole has asked that I find some books in a series that she used to read. I do remember the series so I've been in the basement off and on over the last 10 days, to try to find them. I found other stuff, but, so far, not the books she wants.

I have two stacks of Discworld books. 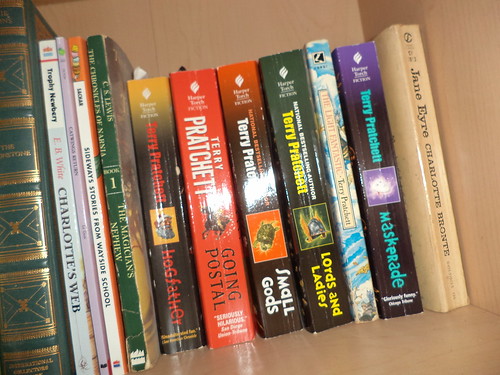 Yes, I have read Jane Eyre, Sideways Stories and Charlotte's Web. I have not read Catwings Return, The Moonstone or The Magician's Nephew. I could get rid of Jane Eyre and not ever read it again. It was better in the first Thursday Next book, The Eyre Affair, by Jasper Fforde, but you do need to have read the original to understand what was going on in Fforde's book. 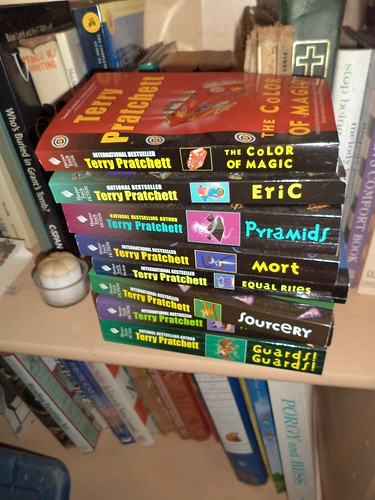 The Color of Magic is the very first book in the Discworld series. (If you're curious about this series, start with that one and then read The Light Fantastic.) I was looking at that and thinking, "You know, I should reread all of these. It would take about 3-4 days for the bigger ones, like Pyramids, but I could finish Equal Rites in a weekend." My recent read, Thud, was added to the stack.

On the bottom shelf is a libretto from Porgy and Bess, the Gershwin's great American opera. I'd forgotten I had this. In 1980, I got to see the whole opera produced at Indiana University. It was magnificent. I probably don't need to keep the libretto as I'm not likely to see the opera again, but, it's one of those things I feel like having.

As I plowed through sections of the basement, I started a stack of garbage. I had water in the basement a many years ago and some things, which were on the floor, really should be tossed. Plus, I had that mice infestation a couple years ago, which the girls eradicated, and I'm finding remnants of where they lived for a bit before a cat sniffed them out and they vacated. I can only work for about 2 hours before the moving of boxes and the sweeping of stuff gets to my joints and I have to rest. But given that it's been years since I cleaned in some spots, this is a victory.

The books have stubbornly refused to reveal themselves. I opened a long thin box and came face-to-face with 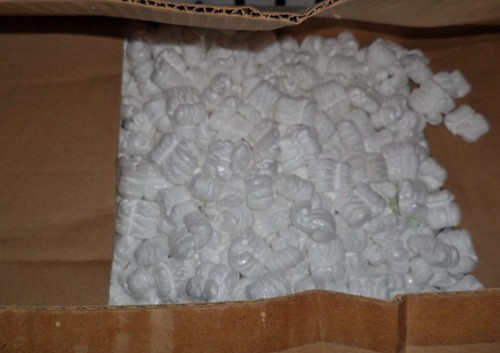 a whole box of packing peanuts.

So, what do I do? Should I move these from the box, which is, actually a good place to store them since stuff can be piled on top of it or it can go on top of other things because it's light, or should I recycle these? I am, likely, traveling over Christmas, so much of what I would normally ship won't be shipped this year. Maybe, as I clean more, I'll find an innocuous place to stick this where I can forget it in December when I'm looking to ship stuff. You know how that goes. "I'll put it right here where I'll remember." Sure I will.

The hunt goes on. I have a few other places I look and then I have no clue. Did they get water logged and we toss them. Carole doesn't think so, but anything could have happened. In the meantime, it's kind of been like an archeological dig in my own basement. "Oooh! I forgot I had this."