There's no shortage of places to buy foodstuffs around here. That's the beauty of living in a reasonably well-off suburban area. Choice is abundant, even if you want to drive a little.

In February, a new grocery store opened in a new strip mall on the site of a former Chrysler car dealer. 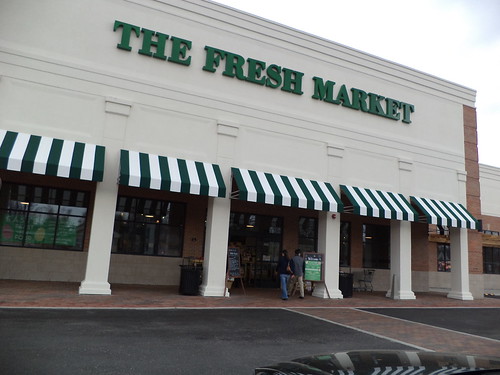 The place I go to get my hair cut is to the right, out of sight. A Firehouse Subs shop is off the photo to the right and a dry cleaner with dry through pick up is at the far left of this strip mall. In terms of use, this is not a bad use of the space. There are still three vacant storefronts, but there are so many empty spaces along this stretch of roadway that it will be interesting to see if these fill within the next year.

I had a list of items I needed so I felt this was the time to check out this place. I've seen them around the Chicagoland area but never been in one. The first thing to notice is the cart area. 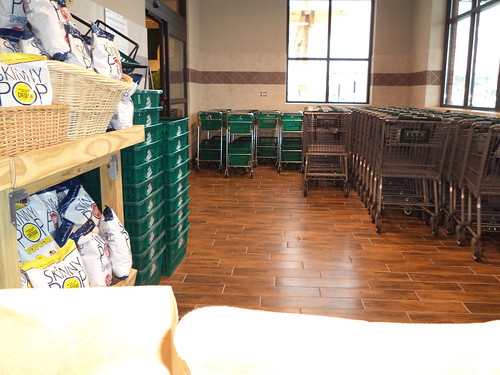 I've mentioned how I like the little carts. I don't spend as much and they are easier to load and unload. Well, the carts to the left are just two baskets on a rolling cart. I was not impressed. It felt cheap, like they couldn't be bothered to buy real carts.

This is a European-style market. It's similar in scope although not as big, as Whole Foods. They sell organic or niche items here. All the produce, which looked great and was competitively priced to Mariano's, was listed as organic. They have daily specials which are listed on a chalk board at the front of the store. I thought the ones for Sunday were on par in terms of price, with anything I'd seen elsewhere.

They have no prepackaged meats. There is a meat counter where you get what you want packaged to order. I'm used to this because I shopped at Whole Foods and it's what I grew up with. The meat looked very good. There is a small bakery, but I liked their offerings. Look! 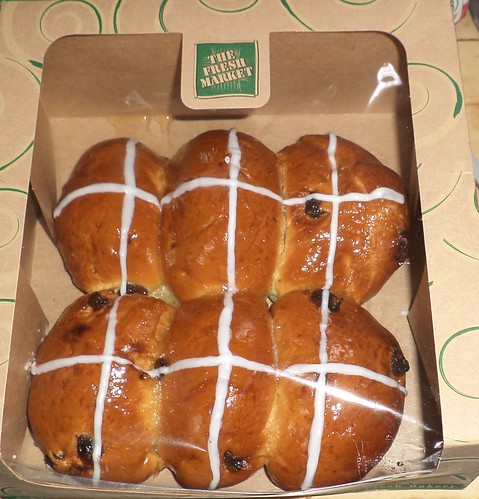 Hot cross buns. They are good and they are the only ones I think I will find this season. Panera is not selling their version this year.

In store bakeries can seem to cater to the sweets department. Mariano's is three cases of donuts, rolls, cakes and cookies. Whole Foods has a sweets section but they do have a larger assortment of breads and rolls. Fresh Market's bakery area was small but had more artisan breads and rolls than sweets. I wasn't in the market for bread this trip but when I am, then I will critically look at their offerings.

They have a large prepared food area and a small, but functional salad bar. On the whole, the store is smaller than Whole Foods but offers similar items. I love the lighting and the look of this store. I don't like Mariano's lighting. It's too fluorescent. It's not a pleasant experience to be in the store. But it has things like cat food and kitty litter and Spam and dish soap and Mom's Best Cereal that Fresh Market doesn't carry. There is no pharmacy and, unlike Whole Foods, there isn't a section near the prepared foods devoted to holistic living, with any kind of herb or vitamin you could possibly want. There was half an aisle and I didn't look very much because I didn't need anything from there.

I came home with fruit, flour and salt, and impulse purchases, like the hot cross buns. This is surprisingly good. 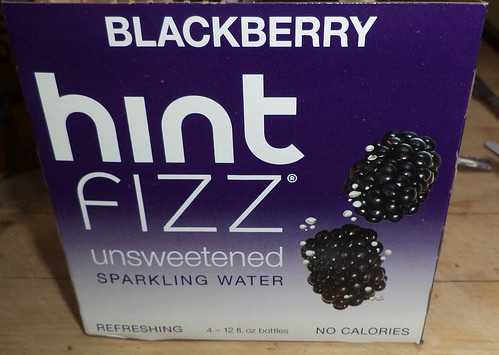 It's too expensive to be consumed at any but occasional times. I'll stick with my LaCroix flavored water, but this comes in watermelon flavor which I will have to try. This was on sale for the same price as a pint of Ben and Jerry's. 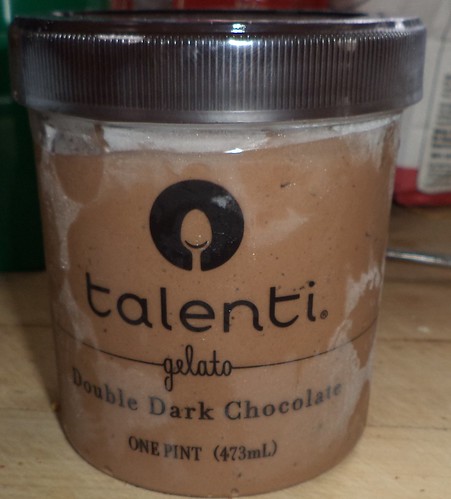 I know I've had gelato but not recently. There has been this craving for ice cream lately. I'm giving this a try. There are other items which will merit their own posts in the future.

The bottom line is that while I like this store, for how it looks and how it feels and the fact that it doesn't play old rock and roll over the speakers, it's not a daily stock-up store. I'm still going to have to go to Mariano's for kitty litter. There was no section devoted to pets. It's on the way home. I pass it most every night unless I go the back way. I can see myself stopping there for fresh fruits and veggies and, once I look over the meat and prepared foods cases, getting those items there, too. I like that it's similar to Whole Foods and closer to me. That's an incentive to eat a bit healthier, a bit. The vegetable drawer in the fridge will always be, I fear, a secondary composter.