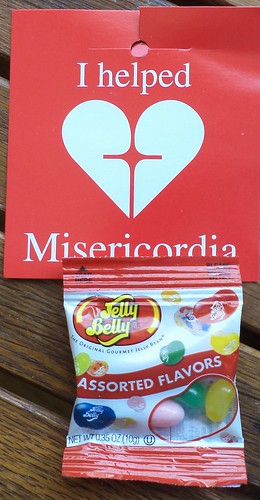 Last Friday, all across the Chicagoland area, volunteers donned these white plastic aprons trimmed in red piping, and stood in intersections waving small bags of Jelly Bellies in an effort to raise money for the Misericordia Home. Misericordia is one of the largest organizations in the country devoted to caring for and providing opportunities to developmentally and physically handicapped people. They are affiliated with the Catholic Church but their facilities and outreach goes to all faiths, all colors, all economic levels.

I knew this fundraiser was upcoming. It had been in the news. Misericordia's street solicitations are the first of three I can remember; Lion's Club and Knights of Columbus. I wonder about the money intake from these. Because I knew about this, I went to the bank to get money so I'd have a dollar to stuff in their donation can. How many people actually carry money anymore? I almost never do. For an upcoming bit a travel, I'm trying to decide whether to carry money and, if so, how much? Ten years ago, that conversation with myself would have been unusual.

We are a nation of credit and debit cards. This past weekend was also a major comic book and etc convention in Chicago. In my World of Warcraft guild, people were discussing the upcoming Blizzcon event for World of Warcraft; Dragon Con, held in Atlanta over Labor Day; and the largest, ComiCon in San Diego in July. One member said, "Yeah I went to x and dropped over $5,000 on stuff." Aside from having the monetary resources, I wondered if he'd carried five thousand dollars around in his pants pocket or if most everyone at these kinds of places takes credit cards. At Misericordia's gift shop, they take credit, but it would be impossible to outfit the guys and gals walking the rows of cars with card readers, even the small ones I've seen on iphones.

So, I'm left to wonder. Are they seeing a drop off of donations from people waving bags of goodies while they walk between lanes of stopped cars? Do donations increase in general around this weekend because people who used to have change with them don't and then go to the web site to donate? Would there ever become a time when this kind of fundraiser's expenses, even with the candy and aprons donated and with volunteers doing the waving, aren't covered by income? Is this really about getting the name of the place in the mind of the public as opposed to making buckets of money?

Part of me thinks I could stuff a couple of dollar bills in the glove box of the Jeep for the Lions Club when they are walking the pavement. I wonder if these kinds of fundraisers are held across the US or are limited to certain regions. They had a lovely weekend to do this. I always feel really bad for them when they have to stand in pouring rain; well, they probably don't have to but I've seen a lot of dedicated volunteers do that.