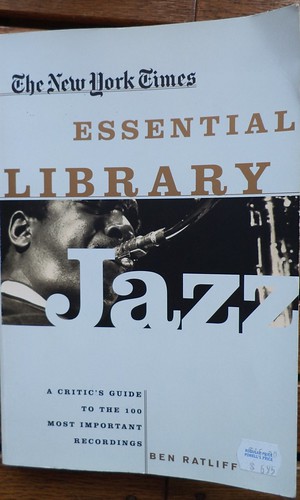 Criticism can be a dicey thing. Whether it is about books, movies, food, music or any collective subject, you risk a backlash for stating what amounts to an opinion. Anyone can be critical of something. I find rap music to be lacking music fundamentals and not at all good, by my definitions, while someone else is going to find graphic novels akin to comic books and not worth the paper they are printed on. What sets us apart from someone who has a book about music, such as the one to the left, is that the author has studied the topic about which he's writing. He's got credentials and he seems to know the genre. He's not just a guy with an opinion.

The other problem with putting out an "essential" list is that it quickly becomes dated. The "100 Most Important Recordings" in Jazz is like the top 100 films. More will come along after the date the list was issued. A list doesn't exist in a vacuum, but perhaps that's also a charm. It's a snapshot of an idea issued at a certain time.

This book was down in the stacks. I've had it for awhile. The copyright is 2002. I bought it for use in creating a jazz library. In reality, I didn't need it. I buy what and who I like and all but 2 of my collection is not in here. Some of the artists, particularly of the modern era, I've never heard of. Perhaps that's good in that I've been exposed to names I don't know.

I wasn't fond of the author's selections, particularly in the modern era. I think he pulled heavily from the free jazz and avant-garde movements. Those are a hugely acquired taste, something I've never enjoyed. He left out swing entirely and that was a large part of the jazz era through the years of the Great Depression and World War II. There were very few vocal recordings and, while there is no doubt that Bessie Smith, Billie Holliday and Ella Fitzgerald influenced jazz singers and still do, there were no comparable male vocal recordings. He is heavy into saxophone recordings, but I find that jazz can be heavy into the music of it and the trumpet. Perhaps that is more indicative of what people are choosing to play, rather than the music that's available. It's hard to find clarinetists and flutists turning out jazz recordings. Regina Carter is the only jazz violinist I'm aware of, but she arrived on the scene well after this book was written. And I honestly don't feel that John Coltrane was the be-all end-all that the author claims he was.

The other criticism I have is the language. "The contrapuntal tangle of 'Muskrat Ramble' is a two and a half minute force field of contained energy", describing Louis Armstrong. "Her voice was thin and piercing with a vigorous narrow vibrato, and she consistently returned to the same blues phrasing and microtonal shadings in relation to the tonic", said about Dinah Washington. "'Come, Gone' is an offhanded sketchbook piece, a piece for blowing across changes until an improvised density is reached" explaining a piece by Sonny Rollins. "Its instrumentation is lean, as if to refute the density that experimental jazz had been accruing', written to describe an album by Julius Hemphill. It's perhaps the nature of the book that, in describing music, it's going to use a language I don't fully understand because I have no music background. I often felt that I was reading another language, a language with a secret code I wasn't meant to know. All that was missing was the wink, wink, nudge, nudge from those "in the know".

Yet I don't think this book was written for learned jazz musicians or music educators. I think it was written in an attempt to give people like me a framework to start a jazz library or, if I had one, to augment it. I have a few pieces by Dinah, the Ken Burns' jazz album on Rollins and a lot of Louis, although not the ones in the book. I had never heard of Hemphill before page 203. After reading the description of the selected album, I think I'll look for other artists before coming back to him, if I add him to my collection at all. So the obtuse descriptions of some artists' music caused me to scratch my head. What is he saying here? I wanted to ask him to put his comments in English and I have a large vocabulary. Just because you know a word doesn't mean you have to use it.

The artist and his or her record is listed first, followed by the other performers on that album. One thing that I want to know, in reading the names listed, particularly for the very early recordings, what became of those people? On Bix Beiderbecke's selected album, for instance, I knew the names Jimmy Dorsey and Frankie Trumbaure, in addition to Beiderbecke. But beyond that, who was Don Murray, Joe Venuti and Bill Challis? Were they always sidemen; those guys who backed up the main performer? Did they ever make a recording on their own with their name first?

One thing Ken Burns' Jazz program reminded viewers is that alcohol and heroin were synonymous with jazz, unfortunately. Beiderbecke drank himself to death before age 30. Billie Holliday was addicted to heroin as was Miles Davis. He went home to East St. Louis and willed himself clean. How many of these names died early deaths? How many faded into obscurity after recording one or two albums? Did they hop around? Some names, like Max Roach, were all over the place, playing for a wide variety of people because they were very good. Some, like Johnny Hodges, stayed with one band, Duke Ellington's, his entire career.

And another thing, nicknames. David 'Fathead' Newman and Jeff 'Tain' Watts are a couple of current jazz artists with nicknames. That's just not done anymore. Looking at the lists of people on albums, nicknames or 'unusual' first names were everywhere:  Cootie Williams, Kid Ory, Earl "Fatha" Heins, many "Budds", "Reds" and "Juniors". Dizzy Gillespie's first name was John, but no one called him that. Duke Ellington's first name was "Edward" and Count Basie was a "William". Perhaps it's indicative of the era. Performers, with the exception of rap and hip-hop, are known by their real names, not nicknames.

I'm on the fence about keeping this book, even as a reference. I just added Bobby Darin's Greatest Hits to my collection and he's nowhere to be found in this book. I suspect the author would look down on his style of singing as cloying and overly commercial. Darin was more popular because of his good looks than his singing, if truth be told, but I prefer his rendition of "Mack the Knife" to Louis Armstrong's or Ella Fitzgerald's.

In the end, it's more about what you like than what a critic says is what you should have in your collection. This was a good read, to be exposed to artists I'd never heard of; they aren't played on WDCB. When it comes to spending my pennies, I'm going to look at what I have and then what I'd like to add. A critic may be sour on Fred Astaire Sings Gershwin, but I'd really like to find that on CD or have someone make a CD from the cassette tape I own. Some music, I just like.