I meant to post this last year shortly after I inspected this building but things got crazy and it never happened. But, something like this doesn't have an expiration date for blogging so here goes.

Chicago is an old city. Someone has lived in this location for, probably, a thousand years, be it Native Americans or settlers. Father Jacques Marquette and explorer Louis Joliet stopped in Chicago as they made their way up and down the Great Lakes and the Mississippi River watershed.

I'm rather delinquent in exploring the rich history of Chicago and Chicagland. I know 'of' things but that's often the extent of it. Being an introvert, the mere act of getting out of the house is a victory and although I love history, love being in historical places, going to those places can be an effort for me. So, when the inspection job takes me some place historical, it is a huge bonus. I get to be in the space; savor and soak up the history as I do my job. I also get  to "stay as long as necessary" to get a job done and that can include engaging people at the location in a discussion of the stories of the place. The Stephen Douglas memorial was one place from 2014.

A place on the radar of "history I know about but have yet to see" is Old St. Pat's Church in what is considered the "west loop" area of Chicago. It sits adjacent to the Greektown neighborhood, with the aroma of restaurants wafting through the streets when the breeze is from the south. 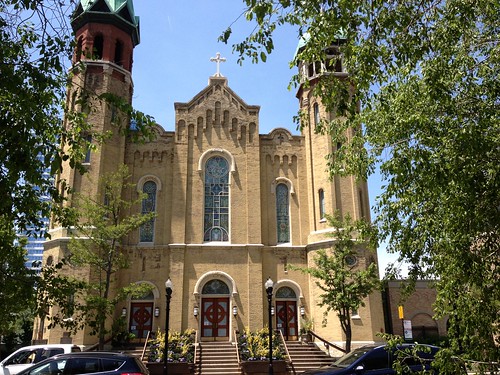 Old St. Pat's is the oldest continually active church in Chicago. A church has been on this site since 1846, founded by Irish Catholic immigrants. The current building, which you see here, dates from 1856. It survived the Great Chicago Fire. The job to which we were attached is kitty corner from this building so it was necessary to inspect the church. I drooled.

The architecture is based on the Romanesque style which dates to Medieval Europe. 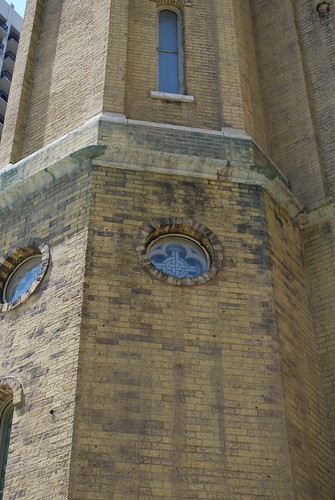 It's a symmetrical design, which you can see here in the towers which have 8 sides, with the lower part having circular windows in each wall. It's kind of a nightmare to inspect a tower like this because there aren't really "floors" as you climb. 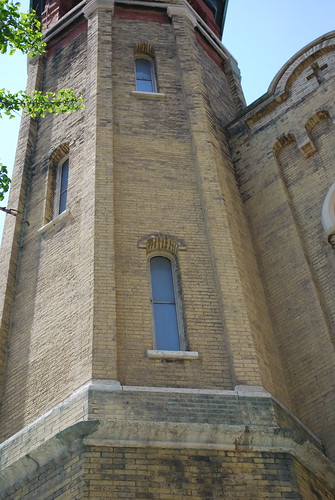 You can see how the stairs go because of the windows. 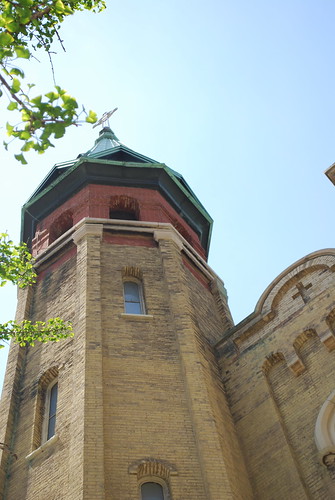 And you see how deeply recessed the windows are, another detail of Romanesque architecture. It gives a modicum of protection from the elements to the window frames, but makes it difficult for me to check the exterior condition of those frames. I must check there is caulking around each window and that said caulking is in good condition, not cracked or deteriorated. Telephoto lenses do a good job. I don't determine if cracked caulking means the window is in danger of falling out. I just report if the caulking is cracked or missing, or if the window frame, itself, is good or has broken or rotten places, for instance. I also report on the state of the panes in a window. Are they good or, as is sometimes the case, broken. I see a lot of broken glass block windows, particularly at street or sidewalk level in basements or garden apartments.

When I was in an art history class in college, I wrote a paper on what makes a church gothic. For Romanesque style, there are the thick walls and columns, bearing the weight of the roof and the walls themselves. There is the symmetry of the octagonal spires which, although capped differently, have the same number of windows. There were the same number of windows on the side walls and something I hadn't noticed before, which, I'm sure, is on other medieval church designs. 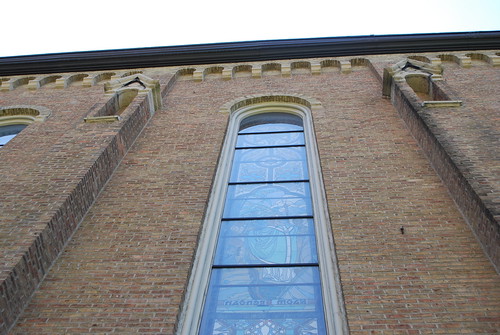 Notice the niches at the top of the columns at the roof. This is the north side of the building. Here's a somewhat close up of one of the niches from the south side. 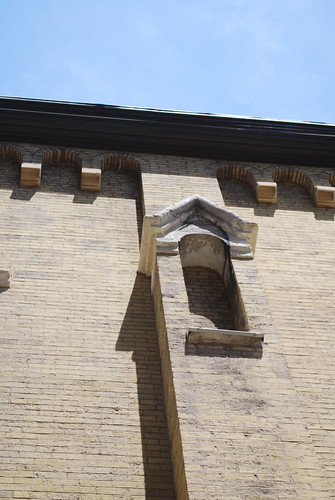 You can see the evenly spaced, symmetrical, arches in between the columns. There are 8 niches on each side. This is a very interesting detail. At one point, statues of saints used to be in each niche. But, Chicago's harsh weather caused the statues to deteriorate faster than anticipated. So, they were removed and the niches left blank.

The front symmetry of the front is found with the three panels and the doors. 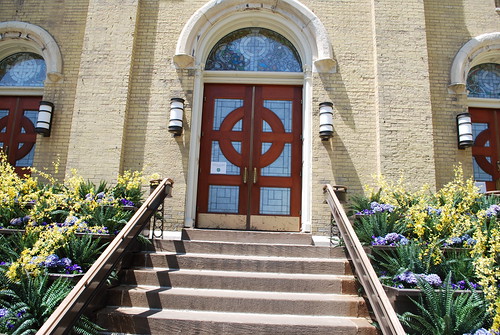 The doors have been replaced many times over the course of the churches history. These are the current incarnations, incorporating celtic design. The stained glass panels above the doors are original.

The flower beds on either side of the front door are a recent addition. 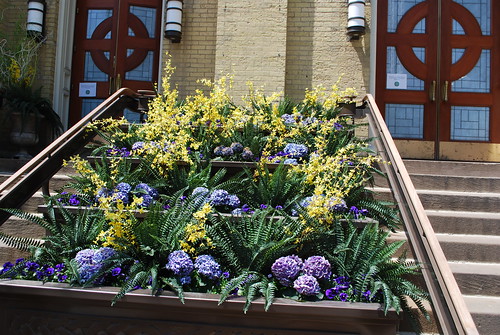 The flowers made the front so inviting.

On the southeast corner, the left tower in the front photo, there is a plaque. 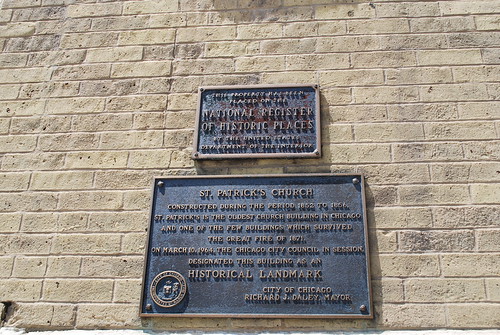 This briefly explains the historic significance of the church. If you like architecture and/or celtic design, you do well to swing by. 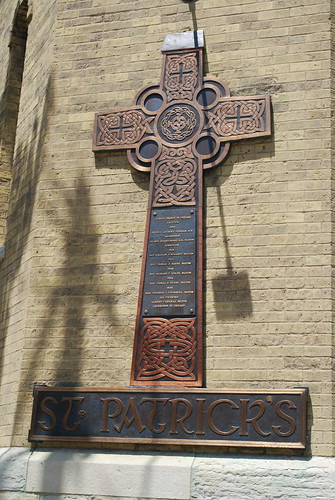