If you've visited here for any length of time, you know I overwinter geraniums every year. The big pink one has been around for, I think 8 years now. I bring them in when nighttime temperatures get below 40 and they don't go back out until nighttime temperatures get to 55 or above. I repotted a couple last year and tossed one that didn't make it. It was spindly when I brought it in and I worried, but it hung on until April when it developed root rot and fell over.

One of the geraniums I repotted didn't really need it, but when I moved it outside, I noticed this on the top of the soil. 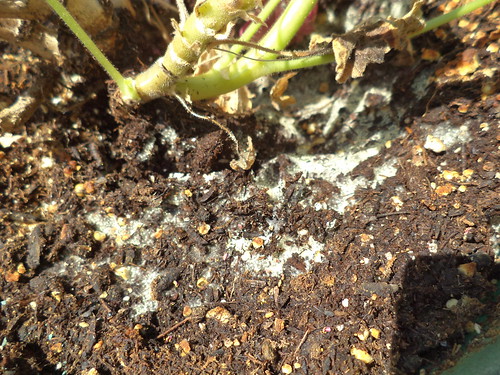 Further examination showed these are egg masses. I don't get grossed out by much, but this was unpleasant. I wound up dumping all the soil out of this pot and moving this geranium to a different pot entirely. This pot was soaked in dish detergent and used, in June for annuals.

No, I don't completely know what bug chose to lay eggs in my geranium. This was the ONLY one, out of 5 pots, which had this. Initially, I thought it was salt from watering, but when I moved the geranium outside, I noticed the little spheres. A friend has suggested these are stink bug eggs. I assumed they laid their eggs in my walls and that's why I'll never, ever, be rid of them. They stay warm in the insulation of the walls, hatch and come out to fly around the warmth of the living room lamps. (Hamlet loves to chase them, but he's learned you don't bite them.)

I'm at a loss about what these could have been. Whatever they were, they were unceremoniously dumped in the back yard. I'm planning to repot all the geraniums this spring, to give them fresh soil. I haven't seen anything like this but there are still 2 months to go before they are back on the deck for spring, summer and fall.